There was a good interview with Don DeLillo by Robert McCrum in The Observer at the weekend, so he was fresh in my mind when I sauntered into one of the charity shops down the road a few days later and found a really cheap copy of this: 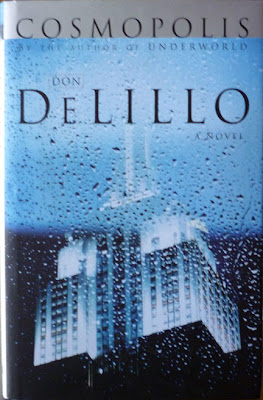 A 2003 UK hardback first edition of Cosmopolis, published by Picador. It's a later, and therefore shorter, DeLillo novel, and not a terribly highly regarded one I don't think – certainly not as lauded as something like Underworld. Never having read any DeLillo I have no idea what to expect, but it sounds intriguing: a billionaire is driven across Manhattan in a stretch limo in search of a haircut, thwarted variously by traffic jams, funeral processions and riots, stalked by two men, and gradually losing his fortune as he progresses.

I dunno why, but I have this strange but definite demarcation in my head between literary authors and the kinds of writers I tend to read – genre writers, for want of another term. Like, it's perfectly fine for me to get happily stuck into a thriller or suspense novel, but I approach a more 'serious' effort – when I do even approach them – with a certain amount of trepidation. Which is daft really. They're all books, after all, written in English, not some special secret language that only dead clever types can comprehend. Still, it's a thing. Hope it doesn't intrude on this book too much.
Posted by Nick Jones (Louis XIV, the Sun King) at 12:07