Here's the thing: signed Elmore Leonard books aren't exactly hard to come by these days. A cursory search on AbeBooks turns up roughly 1,500 results for signed Leonard tomes, and with the author still with us and still signing* (I think... I mean, I think he's still signing, not I think... never mind), that number is unlikely to fall. But there are certain editions of Leonard novels that, to a book collector like myself – which is to say British and unhealthily obsessed with British first editions – are more desirable with a signature than others. Like my signed copy of the British Secker & Warburg first edition of Unknown Man No. 89, for example, or my signed Viking first edition of Pronto (Raylan Givens' literary debut, as if you didn't know). And then there's this: 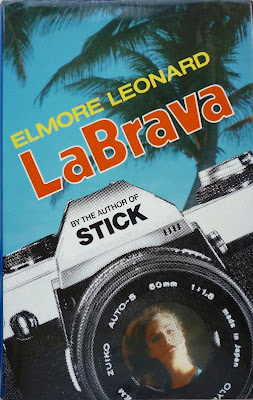 LaBrava, published by Viking in 1984, the year after its US Arbor debut. Frequently cited as one of Leonard's best novels – I'll get to why in a moment – LaBrava is quite uncommon in this edition; there are only about a dozen copies for sale online at present (as opposed to well over sixty copies of the Arbor first edition), and only one of those is signed. This copy isn't just signed, however; it's inscribed: 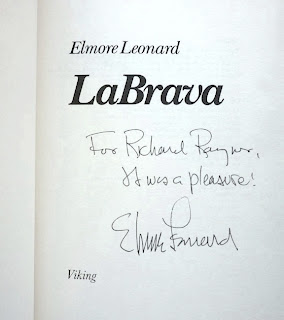 to one Richard Rayner ("It was a pleasure!"), who, I believe, is this Richard Rayner, novelist and journalist. I have a feeling it was inscribed to Rayner when he was assistant editor at Time Out Magazine in London in the early 1980s; that would tally with the publication date. (He's since moved to America – where he writes for the Los Angeles Times, The New Yorker and others – possibly divesting himself of a number of books in the process; I acquired this one, after a bit of haggling, from Any Amount of Books on Charing Cross Road.) Perhaps if he's passing at some point he can confirm (or deny) that. 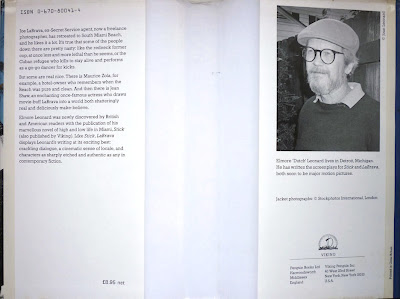 LaBrava follows Stick in the Elmore Leonard backlist; both were published in 1983 (1984 in the UK; LaBrava was originally slated to be published, like Stick, by Allen Lane, but ended up being published by another Penguin imprint, Viking, where Leonard would remain until he moved to Weidenfeld & Nicolson in 2005 with The Hot Kid) and are credited with introducing the writer to a wider audience (LaBrava won him an Edgar Award in 1984). It's easy to see why: both books boast some of Leonard's best character work, the minor players as memorable as the leads.

In the case of LaBrava, that lead is Joe LaBrava, a former Secret Service field officer (and before that IRS investigator) turned photographer living and working in South Beach, Miami, operating out of an Ocean Drive hotel owned by former bookmaker and photographer Maurice Zola. Maurice enlists LaBrava's aid in helping out an old friend of his, one-time femme fatale movie star Jean Shaw, who's being hassled by Richard Nobles, a hulking blond hillbilly rent-a-cop from the "Big Scrub" (Northern Florida) – a man who, we're told, once shot and ate an eagle. It transpires that Nobles and his Cuban partner-in-crime, car thief and part-time go-go dancer Cundo Rey, are attempting to extort money out of Jean – at least, that's how it appears; because this being an Elmore Leonard novel there are a fair few surprises in store as the narrative ebbs and winds its way to its bloody conclusion.

Throw in sundry other bit-part players – Franny Kaufman, a frizzy-haired cosmetics saleswoman (and love interest for LaBrava); Paco Boza, a seemingly wheelchair-bound but actually perfectly healthy (he just prefers to sit in a wheelchair) Cuban drug dealer; Johnbull Obasanjo, a seething, sarcastic Nigerian cab driver-cum-surveillance assistant – and you have as vivid and captivating a cast as Leonard (or any other writer for that matter) has ever committed to paper. But just as vivid is the locale; I've been to South Beach a couple of times myself (attending the Miami Winter Music Conference, in my former life as a dance music journalist), and even though it's doubtless changed a bit since the early 1980s, Leonard totally captures the feel and the atmosphere of Ocean Drive and the surrounding area: the laidback vibe of the place, the Cuban influence, the constant backdrop of the Atlantic Ocean. 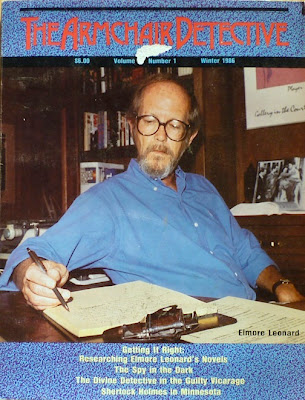 Leonard settled on South Beach as the setting for LaBrava whilst scouting Miami Beach for locations for Stick; this I learned courtesy of an article by the author's researcher, Gregg Sutter, in the Winter 1986 edition of The Armchair Detective, a copy of which I quite by chance happened to acquire (thanks to the redoubtable Jamie Sturgeon) just as I was finishing reading the novel. Indeed, it turns out that LaBrava actually started life as a sequel to Stick: Joe LaBrava was originally meant to be Ernest Stickley, Jr., the eponymous star of Stick (and co-star of Swag), and even after Leonard changed his name (in part due to the movie rights to Stick being sold; Leonard has a thing about studios owning his characters, although that doesn't stop him selling film rights), LaBrava was, according to Sutter, "still basically Stick, who is from a long-standing misfit tradition that goes all the way back to The Big Bounce and [Leonard's] first contemporary lead, Jack Ryan".

Once Leonard had established more of LaBrava's background, however – Sutter providing information on the Secret Service and the IRS and putting Leonard in touch with a photographer he knew – he came into his own as a character, with, in Sutter's words, "more of a moral or sincere streak than Stick" – in the process turning into a precursor, I'd suggest, of a later Leonard creation: the aforementioned Raylan Givens, of Pronto, Riding the Rap and Justified fame. For me, one passage in particular highlights this: a scene also singled out by Sutter – one that Leonard "had been carrying around in his head for five years" – where LaBrava is sitting outside in Paco Boza's wheelchair (Paco has abandoned it for the moment) taking pictures, and encounters Cundo Rey, who grabs his (very expensive) camera. LaBrava lets Rey walk off, not saying a word, knowing that his silence will force the Cuban to turn round. Which he duly does:

LaBrava sat in the wheelchair waiting, his curvy-brimmed Panama shading his eyes, the guy fifteen to twenty feet away, staring at him now.

Holding the camera like he was going to take LaBrava's picture.

The guy said, "I have to ask you something."

"There's nothing wrong with you?"

"You mean, you want to know if you took off could I catch you and beat your head on the pavement? There is no doubt in my mind." 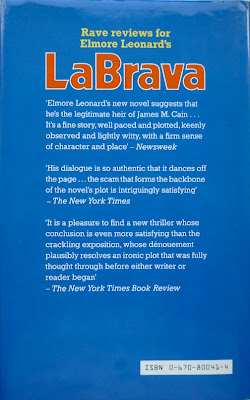 Speaking of Cundo Rey, and despite appearances to the contrary in the novel, LaBrava isn't the end of his story: he popped up again twenty-five years later (along with a character from Riding the Rap) in Road Dogs, the belated 2009 sequel to 1996's Out of Sight. Before I get to that novel, though, and inspired both by Gregg Sutter's Armchair Detective piece and another rather special first edition I've come into possession of, I'll be taking a further detour – in truth more of a doubling back – to a book I've already blogged about: Stick.

* Obviously this post was written before Elmore Leonard died.
Posted by Nick Jones (Louis XIV, the Sun King) at 07:00 4 comments: