Unlikely Authors to Bump Into at Homebase, #532: Gavin Lyall and Duncan Kyle

Of all the places you might expect to chance across second hand books, DIY emporium Homebase wouldn't be an obvious location. But the Lewes branch of Homebase was indeed where I stumbled upon three books by deceased and increasingly forgotten British thriller writers Gavin Lyall and Duncan Kyle, on a small shelf of books donated for charity, just next to the checkout tills. From Mr. Lyall, there was this: 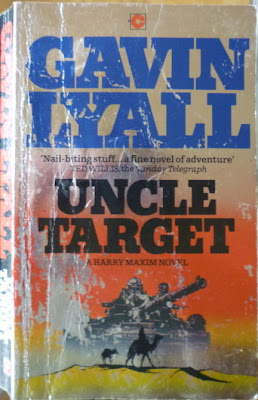 A 1989 UK Coronet first paperback edition of Uncle Target, originally published by Hodder & Stoughton in 1988. This is the fourth and final of Lyall's series starring super spy Harry Maxim. I've already got the first and third ones – The Secret Servant and The Crocus List – in hardback first editions, so only the second one, The Conduct of Major Maxim, to find now. I haven't actually read any of them yet, mind; I'm working my way through the 1960s Lyalls first, which are top notch. I may skip ahead to The Secret Servant soon though.

And from Mr. Kyle – real name John Franklin Broxholme – there were these: 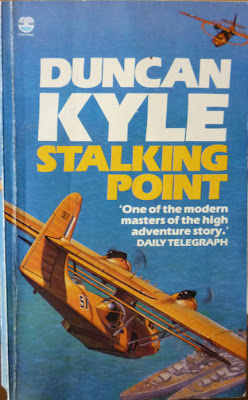 Up top there is a 1983 UK Fontana first paperback edition of Stalking Point (originally published by William Collins Sons & Co. in 1981), and underneath is a 1976 Book Club Associates hardback edition of Terror's Cradle (originally published by Saint Martin's Press in 1974), jacket illustration by Paul Wright. I usually steer away from BCA editions, but this copy of Terror's Cradle was dead cheap, and also I have a feeling that jacket's different to the Saint Martin's one. In any case, I've been meaning to read some Kyle for a while, and these two – one, Stalking Point, a World War II thriller, the other a tale of a journalist up against the CIA and the KGB, set partly in the Shetlands – seem as good a place as any to dive in.

As ever with these Brit thriller writers, if you want to know more you can do a lot worse than visiting my learned friend and colleague Steve Holland at his excellent Bear Alley site. Steve's Gavin Lyall bio and cover gallery is here, and his Duncan Kyle bio and gallery is here.
Posted by Nick Jones (Louis XIV, the Sun King) at 08:05