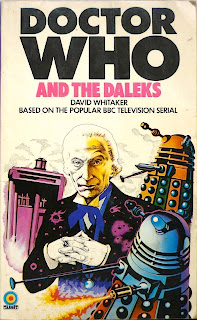 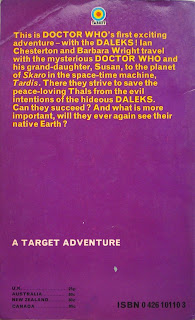 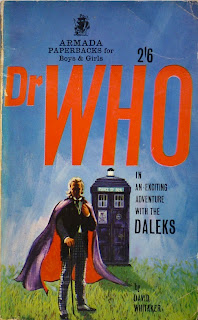 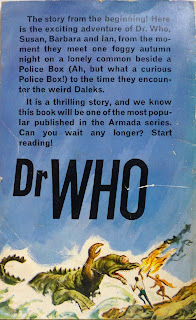 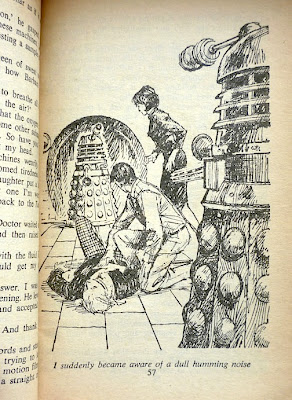 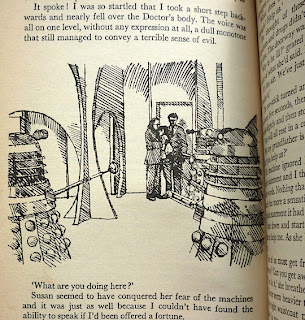 It's a cut above what one might normally expect of a novelisation, and a nice acquisition – or rather, pair of acquisitions – in this, the year of the 50th anniversary of Doctor Who. And hey: maybe one day I'll pass on one or the other of the books – and maybe some of the other Who paperbacks I've accumulated – to a small child, and perhaps engender the same enthusiasm for reading the Who books instilled in me as a kid.
Posted by Nick Jones (Louis XIV, the Sun King) at 12:00 5 comments:

How time flies. Seems like only the other month I was making my way through John le Carré's first three novels and now here he is with his twenty-third... Actually, come to think of it, it was only the other month: I polished off Call for the Dead (1961), A Murder of Quality (1962) and The Spy Who Came in from the Cold (1963) in quick succession in February of this year. 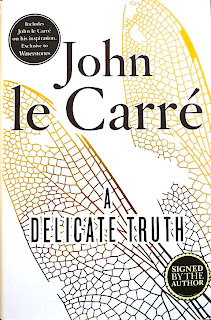 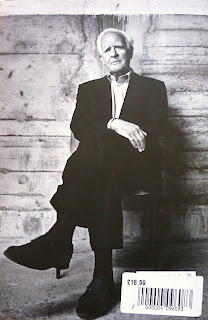 Of course, I'm being disingenuous in order to begin this post with a feeble joke; part of my reason for reading those novels, having previously read and loved the later Karla Trilogy, was I knew there was a new le Carré on the way, and last week A Delicate Truth duly arrived, published by Penguin/Viking in the UK under a dust jacket designed by Superfantastic and heralded by a clutch of positive notices. Indeed, so adulatory were some of the reviews – Mark Lawson's one in The Guardian ("Le Carré is back at full power") and Robert McCrum's one in The Observer ("a remarkable return to mid-season form") spring to mind – that I was moved to pop to Waterstones in Brighton at the weekend and pick up a first edition. Not just any first edition, mind: 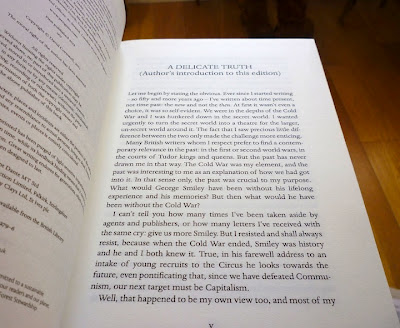 The Waterstones Exclusive, which boasts added content (see also the Waterstones edition of Justin Cronin's The Twelve, which included an additional chapter) in the shape of an introduction by le Carré detailing the background to the novel. And that's not all: 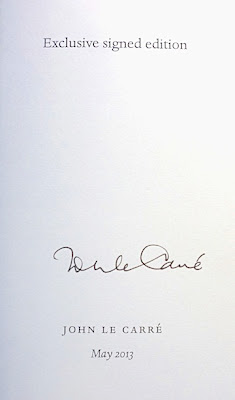 It's signed too. There were a few signed copies secreted in amongst the stock, which I only realised as I was about to exit the shop having bought an unsigned one; needless to say I went straight back to the counter and exchanged it for this copy. And though the novel isn't quite the "return to mid-season form" claimed by Robert McCrum – it's certainly not the equal of, say, Tinker, Tailor, Soldier, Spy (then again, what is?) – it's still a sterling entry in what my good friend and colleague Roly Allen calls "later le Carré", hewing to around half of the points Roly identified as characterising the majority of the author's works from The Little Drummer Girl (1983) onwards. ("Le Carré gets cross about something he reads in a John Pilger book, or Amnesty newsletter"; "Good end up dead; bad end up dragging the bodies into the back of an unmarked van and driving off", etc.) Plus it's a nice companion to my signed first of le Carré's previous book, Our Kind of Traitor. 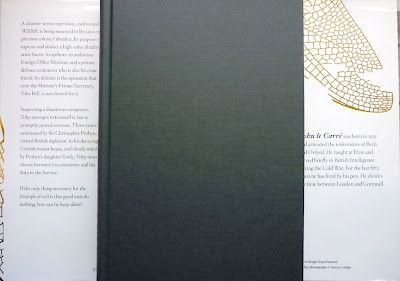