From the Lewes Book Fair: The Difference Engine by William Gibson and Bruce Sterling

So then, The Lewes Book Fair, which took place on Saturday at Lewes Town Hall, was a charming affair, as ever. Plenty of fascinating things to look at, including a first edition of Joe Haldeman's The Forever War (which I want to get my hands on at some point, although that copy was a bit too pricey), a first of Ray Bradbury's The Martian Chronicles, and lots more besides. In the end, however, I bought just the one book, which was this: 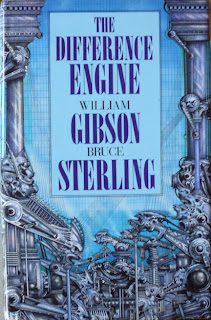 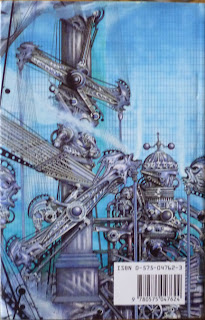 A UK first edition hardback of William Gibson and Bruce Sterling's The Difference Engine, published by Gollancz in 1990, dustjacket illustration by Ian Miller. This isn't a book I had on my collecting list or anything, but then that's the point of book fairs: to chance upon things you wouldn't normally think about buying. It caught my eye after a few circuits round the hall; I've never read any Gibson – or Sterling for that matter – but this early steampunk tale sounded interesting. There's a full synopsis here if you wanna know more.

And then after the book fair, as I mentioned, we headed up to St. Anne's Church to give thanks to the Lord... no, wait, to check out the book sale they had on there the same day. But let's deal with that in the next post...
Posted by Nick Jones (Louis XIV, the Sun King) at 08:02