Mark Billingham's Thorne: Sleepyhead; A Review of the Novel and the Television Adaptation 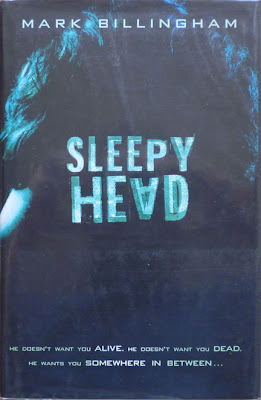 Welcome to another week of themed posts on Existential Ennui (better get used to the idea; there's plenty more of these to come). And the theme this week, you lucky bleeders, is Mark Billingham, specifically his series of books starring Detective Inspector Tom Thorne. As with most of the more contemporary fiction I read, I came to Billingham late in the game – earlier this year, to be exact, when I picked up first editions of the first two Thorne books at the Lewes Book Fair. I'd been aware of the novels for some time (in a book I oversaw last year – 500 Essential Cult Books – we included Sleepyhead in the selection), but to be frank, they belonged to a subgenre I had little interest in, namely detective fiction.

So, a caveat before we get stuck in: despite the crime fiction bent of this blog, I'm really not a fan of detective stories or whodunnits. I'd rather read about the crims than the coppers – Parker, Ripley, Dortmunder – and as for guessing the identity of the killer, frankly, I couldn't care less. In fact, sod the guessing games: just tell me a story from the killer's perspective (stand up, The Killer Inside Me). So if my meandering ramblings on the Thorne books strike you as a little... off, bear in mind it's probably because I haven't read a lot of novels in this particular category. 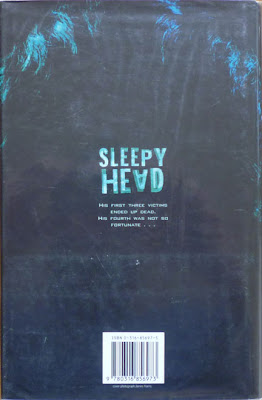 Now that I've got that out the way, this week you can expect a couple of posts on the initial two Thorne novels and how they stack up against the, as we'll see, somewhat less successful Sky TV show they gave rise to (an approach inspired by a comment Book Glutton left on this post about Justified, and one I similarly employed for this post on Tinker, Tailor, Soldier, Spy), along with some Brighton and Lewes Book Bargains. And let's begin with the first book in the series, 2001's Sleepyhead, wherein we meet our hero, Tom Thorne, 41 years of age, three years divorced, childless, living alone in a one-bed flat in Kentish Town kitted out with furniture bought "one wretched Sunday at IKEA".

Thorne is all about his job, an obsession that's left him with a reputation in the Metropolitan Police for being an awkward bastard and someone who it's best not to associate with too much if you want your career to go anywhere. Or at least that's what Thorne's right hand man, Detective Constable Dave Holland's wife reckons, believing that Thorne represents "an unhealthy future for him in the force". Thorne's only real friend is Phil Hendricks, a police pathologist, with whom Thorne spends the occasional evening watching football on telly and drinking beer. But other than that and a touching interest in dance music (country and western is his true love, mind), his every waking hour is spent trying to catch killers.

His latest case is a serial killer whose MO is to target women in their homes, drug them and then give them strokes by kinking an artery in their necks. Except the fourth victim, Alison Willetts, has survived the procedure and is currently hooked up to a ventilator in hospital, unable to speak or move, a casualty of locked-in syndrome. The consensus is she was lucky to have survived... And then Thorne finds a note underneath his car windscreen wiper from the killer, explaining "practice makes perfect", and suddenly the DI grasps that Alison Willetts wasn't a mistake: "She's the first one he's got right." 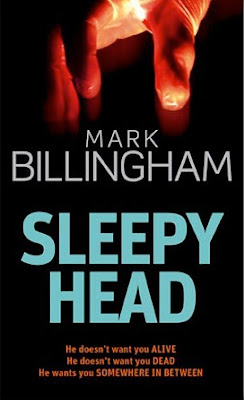 For me, Sleepyhead was a book of two halves – or, as that bloody grammatically challenged pub in Sydenham would have it, Two Half's – or, and perhaps more accurately (make your mind up, Jones), three thirds. I've never read any interviews with Billingham about the writing of it, but it felt to me as if he only really started getting into his stride a third of the way in, when Thorne is bludgeoned and drugged by the killer and has a hallucinatory flashback to the case that made his name (which centred on one Francis Calvert, with whom Thorne had shaken hands and realised at once that Calvert was a serial killer). It's as if Billingham alighted on the notion of locked-in syndrome as a hook on which to hang the plot, and built the rest of the book around that, feeling his way through, sketching in the characters as he went, trying to work out exactly what he wanted the thing to be and do.

It's only when Thorne fixates on anaesthetist Jeremy Bishop as the prime suspect that the novel gathers pace (that Bishop is a friend of Alison's doctor, Anne Coburn, with whom Thorne strikes up a romantic relationship, only serves to further complicate matters). Even so, there's still much to admire as we wait for the story to get into gear. There's a frustrated, desperate but highly amusing running commentary from Alison, a prisoner in her own body but still able to think and feel; there are occasional interjections from Thorne's dad, prone to phoning his son merely to crack terrible jokes; and there's Thorne himself: dour, driven, frequently angry, his own worst enemy. 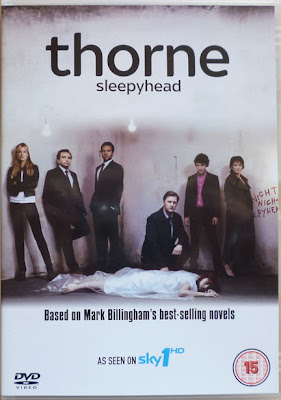 Most of those characteristics can still be seen in the television incarnation of Thorne, although in the shape of David Morrissey, Tom isn't quite the solid, chunky type depicted in the novel (his nickname in the book is the Weeble) – even if Billingham apparently always pictured Morrissey as his lead. Indeed, the TV adaptation – broadcast as the three-part series Thorne: Sleepyhead on Sky 1 in the UK (and now available on DVD) – is like an alternate universe, where everything's just a little bit more glam than it is on the page. Thorne's flat is swankier than it is in the book; the coppers' base of operations isn't quite so grubby (although it is faithfully cavernous); and as for the characters, not only is Thorne himself rather more svelte than we've been led to expect, but Phil Hendricks changes from a Mancunian goth to a twinkle-eyed tousle-haired Irishman (Aiden Gillen) and Anne Coburn becomes the frankly gorgeous Natascha McElhone. Don't get me wrong, McElhone is a fine actress, and she's excellent in Thorne: Sleepyhead, but I dunno: she's not really how I pictured Anne.

All this is ultimately forgivable: it's commercial telly, after all, and bankable stars no doubt helped the series become the hit it was. What's less forgivable are some of the liberties taken with the story. It's not the minor alterations that rankle, things like Thorne's mum still being alive, or Thorne blundering straight into the scene of a crime at the start of the show; it's the fundamental reworking of Thorne's past, specifically the Calvert case, and the resultant changes to the storyline, the consequences of which completely alter the shape of the work. The only way to discuss those properly, though, is to reveal certain elements of the plot, so if you're intending on watching Thorne: Sleepyhead and wish to remain unsullied, stop reading now. In fact, let's throw one of these in for safety's sake:

Still with me? OK then. Here's the deal. In the novel Sleepyhead, Thorne is haunted by his experiences on the Calvert case, fifteen years previously. Having shaken his hand, and as a result believing Calvert to be the serial killer Johnny Boy (the Pretty Boy Killer in the show), murderer of gay men, Thorne goes to Calvert's flat and finds Calvert's wife dead in the kitchen and Calvert's three little girls similarly slaughtered in their bedroom. Finally he finds Calvert himself, also dead, having shot himself in the head. Thorne can't help but feel this gruesome scene was his fault, that when he and Calvert shook hands, Calvert could tell that Thorne knew he was Johnny Boy, and acted accordingly. It's a powerful bit of backstory, and helps to explain why Thorne is the way he is.

In Thorne: Sleepyhead, this same scenario also plays out as a flashback, except Calvert is still alive when Thorne gets to the flat... and it's Thorne who pulls the trigger that blows the back of Calvert's head off. This is covered up by Hendricks, who arrives soon after, and as a result of that, once the cover-up unravels in the present day, Hendricks – who is gay – comes under suspicion for the current murders by both DCI Kevin Tughan and by Thorne.

Now, I'm no Billingham purist (I can hardly claim to be that having only read two books out of a series of eight). If the changes wrought by the TV adaptation had been for the better, or even merely moved events in a different but equally compelling direction, I'd have had no problem with them. But I really can't see the point of saddling Thorne with what is in effect a summary execution in his past. I mean, how bloody tortured do we need the poor bugger to be? And as for Phil being the killer, well I'm sorry but that's just daft. 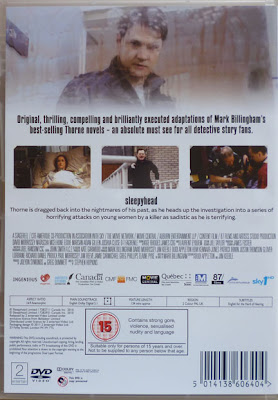 There is, however, one last ignominy to be meted out. Having pissed about with the plot and introduced an ill-considered extra bit of backstory for Thorne, the writers then go and change the identity of the killer. Not only is it an alteration so baffling I struggled to comprehend the basis for it, one which in a single stroke essentially removes the killer's motivation for the crimes, but it's also a dreadful example of that hoary old TV 'tec plot device, the Oh-No-It-Was-That-Minor-Character-We-Met-Earlier-All-Along-You-Know-The-Shifty-Looking-One-Lurking-In-The-Background Reveal. Seriously, I defy you not to point at the screen and shout "HIM! HIM! IT'S HIM YOU USELESS GITS!" the moment the murderer makes his first appearance. So, enjoyable though much of the show prior to this revelation is, witty though the script may be (in places), and fine though many of the performances are (Eddie Marsan is great as Tughan), in the end it's all torpedoed by that hamfisted, mishandled revelation.

It's a shame, because Sleepyhead the novel is a decent read. It smacks slightly, as I say, of an author finding his way, and there's the occasional cul-de-sac that could have been excised (Thorne being accused of molesting Alison for one), but that's fine. It's a debut novel, and any (minor) missteps are ultimately overwhelmed by the sheer force of the prose. Thorne: Sleepyhead, on the other hand, smacks distinctly of a production losing its way, and the missteps only serve to undermine what could have been a great piece of television.

But there is, unfortunately, worse to come. Because while the second Thorne book, Scaredy Cat, is a definite step up from its predecessor, its TV adaptation, Thorne: Scaredycat, manages to plumb even greater depths of pointless plot tinkering...

(And skip along to here to see a comment from Mr. Billingham himself on this post and its sequels...)
Posted by Nick Jones (Louis XIV, the Sun King) at 13:00