Westlake Score: Trust Me on This by Donald E. Westlake

Let's round off the week with another Westlake Score – although not the Westlake Score I mentioned here. That book still hasn't bloody turned up, which leads me to suspect the American dealer I got it from has stuck it on a boat instead of a plane and pocketed the difference in postage. If it ever does arrive, and that does turn out to be the case, I shall be having strong words and requesting a refund, mark my words. Gits.

This Westlake Score, on the other hand, was something I spotted going for a pittance on eBay: 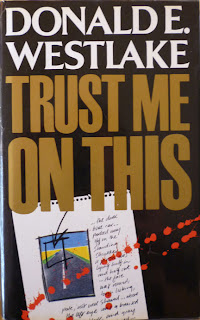 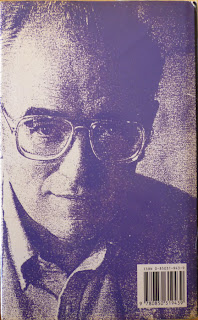 A UK hardback first edition of Donald E. Westlake's Trust Me on This, published by Allison & Busby/W.H.Allen & Co. in 1989 (originally published by Mysterious Press in the US in 1988). This is Westlake's glimpse into the inner workings of a tabloid newspaper (rest assured there's also a murder in it), and is reckoned to be one of his best by some readers. It's definitely a subject I'm interested in: I was a music journalist for about seven or eight years, so I've probably got some tangential familiarity with the subject matter, and I've devoured a fair few books about journalism over the years, from Evelyn Waugh's sublime Scoop to Andrew Marr's My Trade and, ahem, Piers Morgan's The Insider (actually very good on the nitty-gritty of tabloid journalism), not to mention more serious efforts like John Lloyd's What the Media are Doing to Our Politics and Nick Davies' Flat Earth News.

A good addition to the Westlake collection, then. And you never know: if the gods are smiling on me, I might have something else Westlake-y to blog about over the weekend. We shall see...
Posted by Nick Jones (Louis XIV, the Sun King) at 07:41