So, after last week's flurry of new arrivals as part of Westlake Week, I figured this week would be slightly more relaxed, with only one or two new arrivals to blog about, which have been waiting patiently in the wings while I worked through the various Westlake/Stark Scores. I mean, there are a few of other books I ordered online a while back, and those I was planning to drop in as and when they arrived, but not an awful lot, so I was hoping to have cleared the backlog. And then at the weekend I happened to pop along to a book sale at a church up the road, and the Lewes Book Fair, and also, bizarrely, DIY emporium Homebase, and ended up with another shedload of books from those three locations, mostly at around twenty pence a pop. So now I'm completely behind again. Buggeration.

Before we get to those, however, let's deal with this: 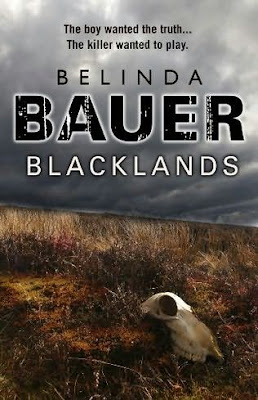 A UK first edition/first printing hardback of Blacklands by Belinda Bauer, published by Bantam at the start of this year. I read a review of this around the time it came out, then promptly forgot about it. Nul points. But then I realised recently it had already come out in paperback, and found a cheap first edition hardback online. Douze points. Set on Exmoor, it's about the game of cat and mouse between a twelve-year-old boy and a serial killer/paedophile, which doesn't exactly sound like a barrel of laffs, but is apparently a darn good read. It's Bauer's debut novel and has been shortlisted for a Crime Writers' Association Gold Dagger Award, alongside the likes of James Lee Burke, Denise Mina, and George Pelecanos' The Way Home (which I've read – an excellent book). I think I'll be shuffling it to the top of my groaning 'to read' pile...

(UPDATE: Which I duly did, and posted this review the following month.)
Posted by Nick Jones (Louis XIV, the Sun King) at 07:20