If the 1980s were, as is sometimes claimed, the decade that comics 'grew up', they were also the years in which my taste in comics grew up. I started the decade a callow ten-year-old into 2000 AD and superheroes; discovered Warrior – probably the comic that most expanded my understanding of what comics were and could be – in an Elmers End newsagent when the magazine launched in 1982; bought Watchmen and Dark Knight Returns in Forbidden Planet on Denmark Street as they were published monthly (or not, as the case turned out to be); got into the Fast Fiction/Escape small press scene around the same time; and ended the decade a callow nineteen-year-old who'd pretty much given up on comics in favour of another obsession, music (a state of affairs that persisted for the best part of the 1990s).

I mention all of this because of late I seem to be succumbing to a mild bout of reinvigorated enthusiasm for 1980s comic books – American ones for the most part, a mixture of independent and Marvel/DC. Accordingly, I'm planning on reading or rereading a number of 80s comics this year, which may or may not beget a series of posts – hence the '80s Comics Cavalcade' title of this one. We'll see if this proposed series gets any further than this first effort, which ostensibly is about writer Doug Moench and artist Paul Gulacy's mid-80s four-issue sci-fi miniseries (and its four-issue sequel) Six from Sirius. 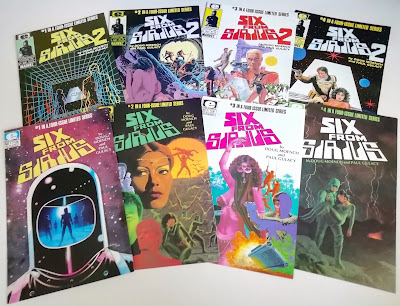 I think I vaguely recall seeing Six from Sirius in 1984, when the first miniseries was published. It was around then that I first found my way to central London's comic shops – initially Fantasy Inn at the bottom of Charing Cross Road, then Forbidden Planet, then such vanished haunts as LTS/Paradise Alley (down an alley off Denmark Street and up some stairs), Comic Showcase on Neal Street and Jonathan Ross's Top 10 on St. Anne's Court (see here for more on London's lost comic shops) – so I probably saw it in one or other of those places. (This would have been shortly after I'd discovered the Popular Books chain of shops closer to home in Lewisham, Catford and Camberwell; those sold/exchanged back issues, with a partitioned-off bit where you could buy dirty mags, which was obviously also of some interest at that juncture in my adolescence.) 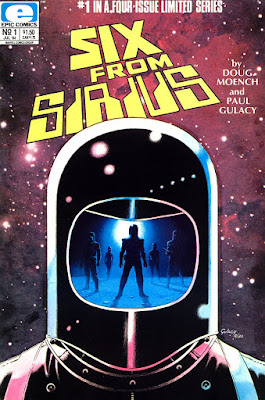 Certainly the cover of the first issue of Six from Sirius is very familiar. I didn't buy it back then, but when I eventually got my hands on the two miniseries the year before last – courtesy of Brighton's back-issue specialists Dave's Books – that cover took me right back to browsing the shelves of the dingy old Forbidden Planet. Indeed, over 30 years on from first publication, Gulacy's covers across the two miniseries remain gloriously vibrant and evocative of the space-operatic spy story within. 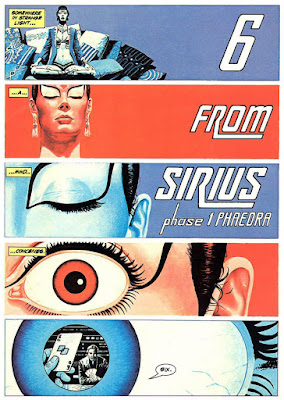 His interior art is fabulous too, coloured by Gulacy himself using markers (not paints, as is sometimes assumed: "You will never see me painting a comic panel after panel," Gulacy told Amazing Heroes in 1989, labelling the very notion "absurd"), a technique he'd acquired in advertising. 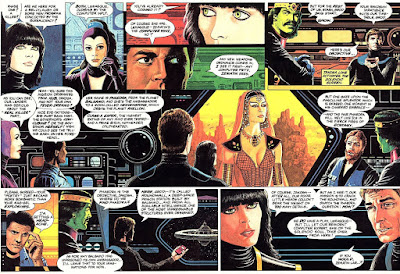 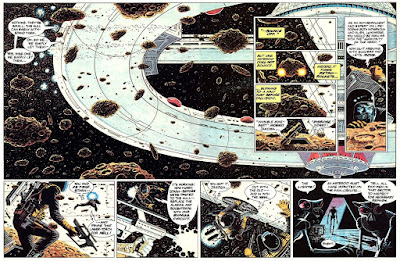 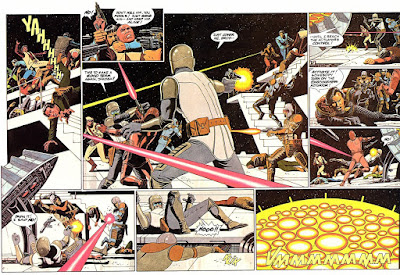 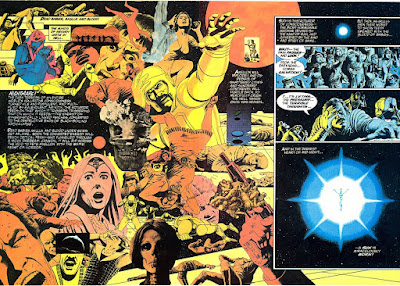 As one might expect of a comic of this era, the script is a little on the gabby side, with a fair amount of unnecessary expository dialogue; but the general thrust of Moench's story is compelling, especially the bits about body swapping – the insertion of consciousness into artificial "fax" bodies – and the narrative twists that those give rise to. 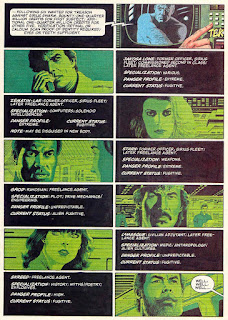 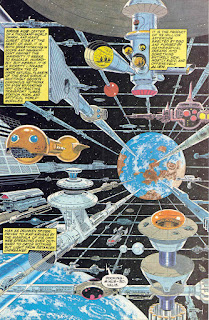 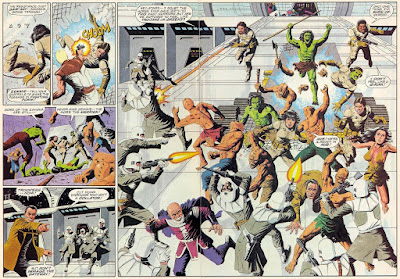 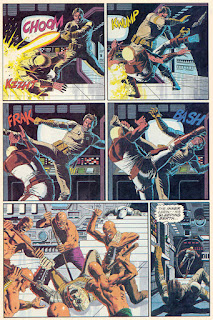 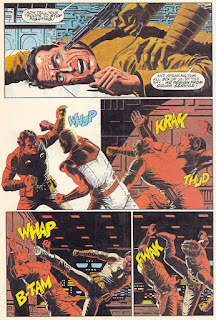 The second miniseries, which appeared in 1985, also has some intriguing SF concepts in it – notably the notion of a kind of purgatorial pocket dimension that various competing powers want to use as a Trojan Horse – and some fabulously kinetic action sequences towards the end. Something else it has is back-up stories by other creators. I'm guessing these were introduced in this and other titles published by Epic (a boutique Marvel imprint which at this stage predominantly published non-superhero, creator-owned series, always a tough sell) as a way of increasing sales, but based on the back-up stories in Six from Sirius 2, I can't imagine they were much of a draw. That said, I did find Jonathan Zack's "Parody" in #1 divertingly baffling. 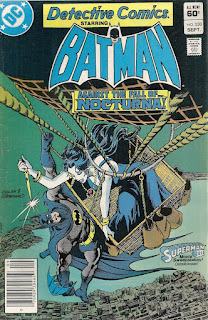 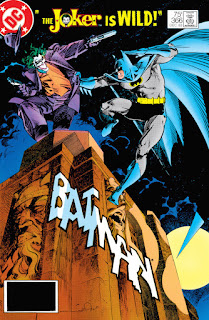 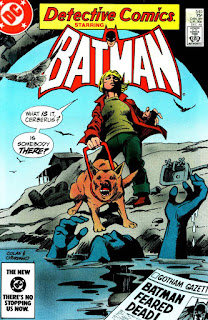 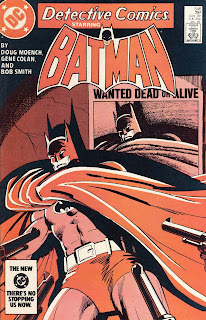 Incidentally, while I've never read Moench and Gulacy's signature work, Master of Kung Fu, I have read, and enjoyed, other stuff they've done together – 1986's Batman #393–394; the 2000 Batman: Outlaws prestige format miniseries; one or two other things. But it was Moench's run on Batman and Detective Comics circa 1983–84 – especially his work with Gene Colan – that I think made the biggest impression on me. I was 13, 14 at the time, and vividly recall buying those issues in a newsagent on Croydon Road in Beckenham. My original copies are long gone, but if get my hands on the issues again, maybe I'll write something about them. 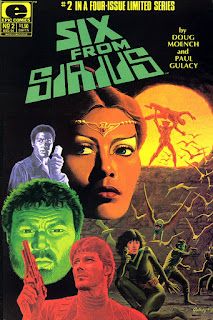 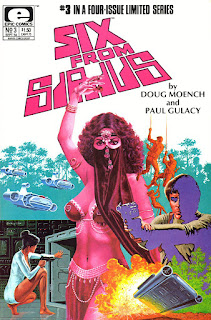 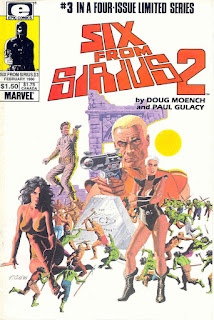 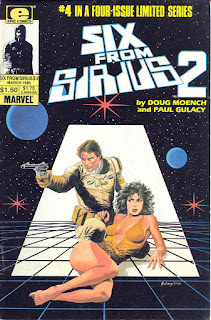 Other 80s comics I'm considering covering in this prospective series include Matt Wagner's Grendel, J. M. DeMatteis and Mike Zeck's Captain America run, James D. Hudnall and John Ridgway's Marvel graphic novel Rick Mason: The Agent, and the aforementioned Warrior. Whether I'll get round to all – or indeed any – of these is anyone's guess.
Posted by Nick Jones (Louis XIV, the Sun King) at 08:00 5 comments: