Today is my birthday, and in celebration of being, like, really old, I was given (among other things) three Alison & Busby Parker novels! Drum roll please... 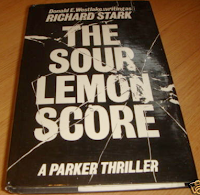 Interestingly (er...), The Green Eagle Score is in the same smaller format as The Mourner (1987, Parker #4). Curious. Anyway, it's really nice to have these three editions. Happy birthday to me.
Posted by Nick Jones (Louis XIV, the Sun King) at 07:20 No comments: 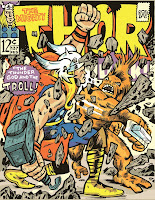 I would for damn sure buy more of them. That's Brian Ralph's interpretation of an old Jack Kirby Thor cover. Look at that thing. Those bits of flying rock are almost 3D. Amazing.

(* Borrowed from the brilliant Covered blog, which I have a permanent link to just on the right there.)
Posted by Nick Jones (Louis XIV, the Sun King) at 07:10 No comments:

Not a bad week for comics this week. Here's wot's coming aht and wot I will get:

Captain America #604. Ed Brubaker's Cap is always solid with occasional flashes of brilliance. This current storyline about the 1950s crazy Cap has leaned more towards the former, but I have a lingering fascination with '50s Crazy Cap having read some screed years ago trying to make sense of the fact that there was still a Captain America around well into the 1950s even though it was subsequently established (in the 1960s Avengers series) that Cap got frozen in a block of ice at the end of World War II, and also to address the issue of Cap becoming increasingly anti-Communist during that '50s period (the answer being, he was a different guy, and he was crazy). It wasn't in the comics themselves I read about all this – must've been some magazine thing Marvel published in the 1980s – but the convoluted nature of the explanation really gripped me. I'm weird like that.

Green Lantern #52. Perversely I started picking GL up again at the #50 mark, even though I haven't been buying the Blackest Night miniseries proper. The answer for this being, Parallax is back, and I loved the Crazy Hal Jordan/Parallax run of stories from five or ten years ago. I'm weird like that.

New Avengers #63. One of my favourite comics. A no-brainer. I'm weird like that.

Orc Stain #2. I'm not even sure I liked the first issue of this, which is the sort of fantasy quest thing I usually steer clear of. But I might get this second issue anyway. I'm stupid like that.
Posted by Nick Jones (Louis XIV, the Sun King) at 06:40 No comments:

I used to love Gerry Anderson's Space 1999 when I was a kid in the 1970s. The theme tune was brilliant – a fast piece of wah-wah guitar funk with orchestral and horn breakdowns – and the special effects were pretty well done, Anderson employing the same model techniques he'd used in the likes of Thunderbirds. The only comparison I had at that point was the original Star Trek, and though I loved Trek, Space 1999 seemed somehow more believable. And it was quite polished, at least in the first season (even at the time I could tell the quality had dropped in the second season). But it was also easier to relate to, due to the presence of so many British actors.

Anyway, I was in Tunbridge Wells at the weekend and picked these up in one of the bookshops there:

Of course, errors in different editions of books cut both ways. I was reading the 1973 Berkley edition of The Outfit and noticed a missing word, which was corrected in the 1988 Allison & Busby edition. So points to A&B.

And then straight after that I spotted a missing letter in the middle of a word in the A&B edition. Points deducted again!

On balance, I'd have to say the '88 edition has more mistakes than the earlier printing.

There've been a considerable number of contenders over the life of this blog, but this really must be the most boring post I've ever done.
Posted by Nick Jones (Louis XIV, the Sun King) at 06:12 No comments: