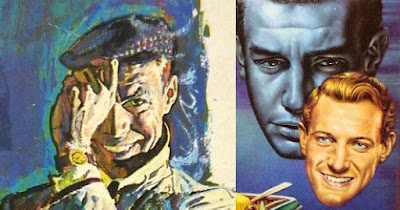 A couple of years ago, in this post on The Boy Who Followed Ripley (1980) – the third novel in the five-book Ripliad – I noted that Patricia Highsmith identified with Tom Ripley more than any other character she created. In her guidebook Plotting and Writing Suspense Fiction (1966) she wrote of Tom's debut, The Talented Mr. Ripley (1955), "No book was easier for me to write, and I often had the feeling Ripley was writing it and I was merely typing," while later novels in the Ripliad, The Boy Who Followed Ripley among them, are littered with opinions and asides that are ostensibly Tom's but in fact recognisably those of his creator. Highsmith was even known to sign letters to friends, "Tom".

But Highsmith drew on other sources besides herself in her formulation of Tom Ripley. Andrew Wilson, in his 2003 biography of the author, Beautiful Shadow, points to Julian Green's 1947 body-swapping fantasy If I Were You and Henry James's 1903 novel The Ambassadors as two literary inspirations for Tom and The Talented Mr. Ripley. He also highlights a real life inspiration: a Herald Tribune news story that Highsmith read in 1954 about a man "presumed dead after the discovery of a charred body" who "was spotted drinking after his 'funeral' and... arrested". But there's another real life inspiration for Tom, one that Highsmith herself wrote about in an essay for the Winter 1989 issue (#29) of literary journal Granta.

Titled Scene of the Crime, the essay recaps the events of The Talented Mr. Ripley before turning to "the place where Ripley was born," as Highsmith puts it, "in the sense of being a story-less image in my memory". The place is Positano on the Amalfi Coast, which Highsmith visited for the first time in late summer 1951. (Wilson's biography contradicts this, stating that Highsmith first visited Positano in late summer 1949.) Emerging onto the balcony of her hotel one quiet morning Highsmith "noticed a solitary young man in shorts and sandals with a towel flung over his shoulder, making his way along the beach from right to left. He was looking downward... I could just see that his hair was straight and darkish." She continues:

There was an air of pensiveness about him, maybe unease. And why was he alone? He did not look like the athletic type who would take a cold swim alone at an early hour. Had he quarrelled with someone? What was on his mind? I never saw him again. I did not even write anything in my cahier about him. What would there have been to say? He looked like a thousand other American tourists in Europe that summer. I had the feeling that he was American.

The image of the solitary young man returned to Highsmith months later on her second trip to Europe when an idea for a story occurred to her, "...of a young American drifter being sent to Europe to bring another American back home, if possible". (Highsmith admits at this point the similarity of her notion to The Ambassadors.) Yet when she actually came to write The Talented Mr. Ripley, she was "not sure that the Positano beach image with the solitary figure even came to my mind", although Positano itself made it into the novel – and onto the dust jacket of the 1957 British first edition – as Mongibello. It was only "years later [when] journalists asked me, 'Where did you get the idea of Ripley from?' and as I racked my mind to answer, to recall exactly where, [that] the solitary figure on the beach returned to me, and I described his appearance – as I had seen it from two hundred metres or more".

The stretch of the Positano beach, which has not changed much except that it may now hold a few more boats or people, has no particular fascination for me. Ripley was not really born there, was just an image for me, and needed another element to spring to life: imagination, which came many months later. 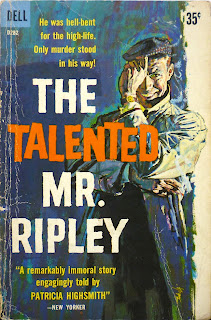 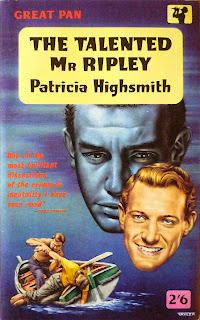