Mark Billingham's Thorne: Scaredy Cat; A Review of the Novel and the Television Adaptation

If you've just joined us, this week I'm blogging about British author Mark Billingham and his series of novels starring Detective Inspector Tom Thorne: serial killer catcher, country music lover and all round miserable bastard. (That's Thorne, not Billingham. I think.) Yesterday I looked at the first book in the series, 2001's Sleepyhead, and the Sky One TV show it inspired, 2010's Thorne: Sleepyhead, and later in the week I'll have a bunch of Lewes and Brighton Book Bargains (which, for the uninitiated, consist of me crowing unattractively about cheap first editions I've picked up in those salubrious Sussex towns). 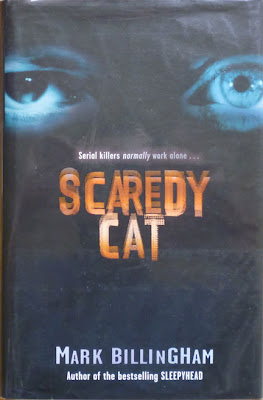 But today it's the turn of the second book in the series, 2002's Scaredy Cat, and the 2010 Sky TV series it inspired, i.e. Thorne: Scaredy Cat. And the first thing to note is that Billingham's sophomore effort is a better book all round than its predecessor. The confidence the author evidently gained in the writing of Sleepyhead is apparent from the off: Scaredy Cat is more focused, more propulsive, and actually works better as a story. And so, for the most part, does its television adaptation – right up to the point where it pisses it all up the wall.

I'll come back to how and why it does that in a bit. First though, the broad strokes of the plot. Scaredy Cat (the novel) finds DI Tom Thorne newly installed as second-in-command of Team 3, Serious Crime Group (West), with Detective Chief Inspector Russell Brigstocke (whom Thorne has known for ten years) in charge and Detective Constable Dave Holland and Detective Sergeant Sarah McEvoy bringing up the rear. Ostensibly Team 3 has been set up to investigate crimes that fall outside the remit of other parts of the Metropolitan Police Force, although the rumour is it's really been instated because no one knows quite what to do with Tom Thorne. 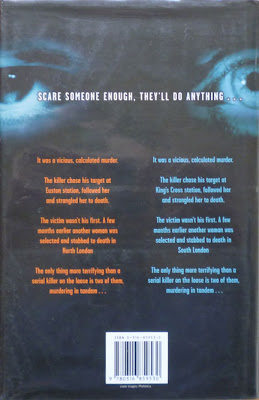 The team have one case open – a series of increasingly violent robberies at hotels – when they're tasked with solving a new murder, that of Carol Garner, strangled at her home, leaving her three-year-old boy, Charlie, on his own for two days with only a discarded chocolate wrapper to sustain him. But there's more to the case, because straight after murdering Carol, the same killer apparently strangled another woman. And when a further two victims are found, this time stabbed to death, Thorne begins to suspect he's dealing with not one killer, but two...

Of course, we the reader(s) are almost a step ahead of Thorne, because parts of Scaredy Cat are actually told from the perspectives of the killers, Stuart Nicklin and Martin Palmer. Indeed, the novel opens with Nicklin as he stalks Carol (pulling a neat switcheroo of expectations in the process), and then flashes back to successive moments from Nicklin and Palmer's childhoods, also involving another friend, Karen McMahon. The hold Nicklin has over Palmer is frighteningly plausible, and this in essence is what the book is all about: power, or the lack thereof. We follow Nicklin in the past, as he embraces his violent urges and divests himself of his identity, so that even when the hapless Palmer eventually gives himself up, distraught at the horrific nature of his crimes, he can't identify Nicklin because he has no idea what Nicklin's name is now (and neither do we, until the very end). 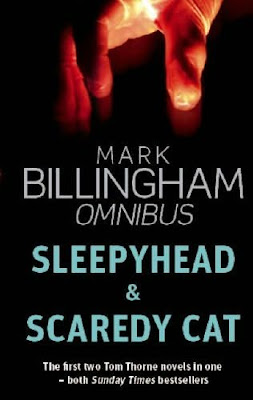 Some of this apparently has its basis in Billingham's own past. In 1997, Billingham and his writing partner, Peter Cooks, were held hostage in a Manchester hotel room, kept bound and gagged by three masked men and eventually robbed. From that episode, Billingham got the themes of power and fear, and the notion of tandem serial killers working together (not to mention the parallel – if underdeveloped – hotel crimes). I didn't know all that when I was reading Scaredy Cat, but it does help explain why it's so much more convincing than Sleepyhead (that, and Billingham's increasing confidence as a novelist, that is). It also makes for an extremely forceful, assured and credible narrative... which is why it's all the more frustrating and infuriating when, quite unnecessarily, the TV adaptation dispenses with that theme in a wantonly destructive and dunderheaded act of defenestration. 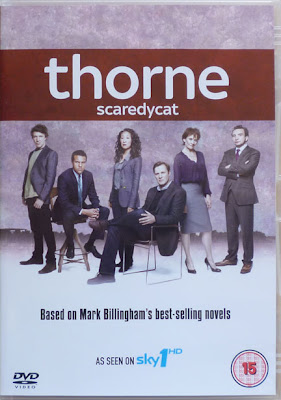 Before it does that, Thorne: Scaredy Cat actually makes a decent fist of adapting the novel. There are the expected minor alterations: Sarah McEvoy becomes Sarah Chen, and the hotel subplot gets worked into the main plot – probably because Billingham himself does little with it in the book, forgetting about it for the most part and quickly resolving it towards the end, although its denouement does provide a plot-required character moment for the increasingly paranoid, cocaine-addicted Sarah. And instead of DCI Brigstocke we get Eddie Marsan reprising his role as DCI Kevin Tughan. There, though, it's all to the good, because Marsan is even better this time out and also has the best line of the show, which he blurts out after Thorne explains his two killers theory and offers as evidence previous murderous partnerships like Venables and Thompson and Brady and Hindley. To which Tughan responds disparagingly: "Ant and Dec, Robson and Jerome, Donnie and Marie, Mike and Bernie fucking Winters!"

No, where the series really goes off the rails is in the third and final episode. In order to deal with that, however, I think I'd better throw in another one of these:

Now, I can't state this for certain, but I suspect I began to get an inkling of what the writers were intending to do earlier than the third episode. In the novel, Thorne's thoughts often return to the traumatised Charlie, wondering how he is, but the TV show keeps returning to him for a different reason, namely confusion over whether he saw one killer or two. This is made explicit in the third episode, when pathologist – and Thorne's mate – Phil Hendricks shows Charlie a combined picture of a photofit of Stuart Nicklin and a photograph of Martin Palmer, upon sight of which Charlie begins screaming... and at which point my underlying sense of disquiet turned to outright dread. Surely the writers couldn't be setting up what it looked like they were setting up... Could they? 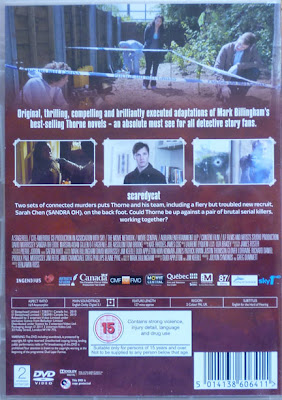 But as Palmer, Sarah Chen, Thorne, Holland and, for some unfathomable reason, Hendricks (played by Aiden Gillen – which, come to think of it, explains his presence at the finale: can't very well leave a big star like that hanging around back at HQ, now can we?) all converged (don't do it) on the patch of wasteland (don't you dare do it) where Nicklin was supposedly going to show Palmer (please I'm begging you DON'T DO IT) Karen's grave, I realised that, yes (oh bollocks), they were really going to do it (oh you silly sods). Because not only do Thorne and Hendricks discover the grave of Karen... they also uncover the grave of Stuart Nicklin.

That's right: Nicklin only exists in Martin Palmer's head, as a split personality.

Exactly as they did with Sleepyhead, at one stroke the writers of Thorne: Scaredy Cat – stand up and take a bow, Dudi Appleton and Jim Keeble – utterly undermine the story's theme and make a complete mockery of everything that's gone before. It is, in effect, a variation on that dreadful get-out clause, It Woz All A Dream. The writers, producers and director might just as well have taken the closing scene from Boxing Helena and stapled that on instead.

So there you go. That, in an overly wordy nutshell, is Thorne: Scaredy Cat. Still, no matter. The novel remains a cracking read, and by all accounts each subsequent book only gets better. And in the next couple of posts in this Billingham bonanza, I'll be showcasing some of the first editions of those novels I've picked up in charity shops over the past few months....

(And skip along to here to see a comment from Mr. Billingham himself on this post and its sequels...)
Posted by Nick Jones (Louis XIV, the Sun King) at 13:38