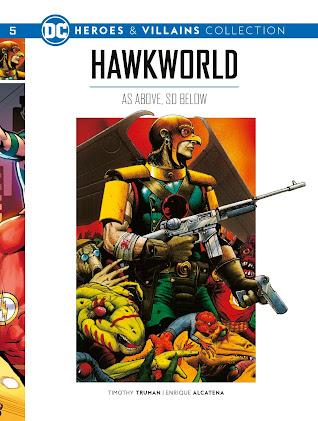 Something I don't really get into in my bonus feature on Tim Truman, Gardner Fox and Joe Kubert in the DC Heroes & Villains Collection edition of Hawkworld – which has just been published – is how the 1989 three-issue prestige format miniseries was received at the time. (There's only so much space in these books for me to bang on about the minutiae of DC's past!) Certainly it did well enough for DC to launch an ongoing series off the back of it, but it seems there were some readers who were less than pleased with Truman's take on Fox and Kubert's Silver Age Hawkman – this despite Truman being a friend and avowed fan of Katar Hol's creators. In an October 1994 interview in Wizard magazine (issue #34, which I happened to be reading just now), Truman responds to interviewer Paul J. Grant's assertion "You managed to enrage a lot of old-time Gardner Fox/Joe Kubert fans with Hawkworld" in the following manner:

"Yeah, especially those that only managed to read the first issue. Most of those that read through all three issues of the miniseries and saw what I was trying to do appreciated it, but I've had people come up to me at cons practically spitting on me. In no way did I want to denigrate the character, especially since I was dedicating this to Gardner and Joe Kubert. This was just my take on the fact that there are heroes, but they aren't created by seeing a bat fly though a window.

"In order to appreciate the story, you had to hang with it. Luckily, a lot of people did. I'm very proud of the fact that it won a Haxtur Award, a fan-based nomination sponsored by the government of Spain in 1992, for best comic series. They flew me over there to accept it. Having been so fond of European work for so many years, that was a real honour."

In the same interview, there's a nice bit of background on the Joe Kubert School of Cartoon and Graphic Art, which Truman attended in the late 1970s – and which I do cover in my feature – Truman recalling, "We were housed in this big, ramshackle old mansion with a pool out back where we'd go swimming with tadpoles and frogs," and revealing that among the instructors, besides Kubert himself, were the likes of Dick Ayers and Dick Giordano. If you want to read more about that period of Truman's life, and how his friendships with Kubert and Fox shaped his life and career, check out the DC Heroes & Villains Collection's edition of Hawkworld.