I noted in the previous post, on the Elmore Leonard omnibus Dutch Treat, how I've been on something of a Leonard kick of late, fuelled in part by a big haul of Leonard first (and other) editions I bought off Brighton book dealer Alan White – one of which being the aforementioned Dutch Treat. Most of the Leonard novels I've been reading have been new to me, but I've also reread a couple of the author's books I first read many years ago: Get Shorty, which was as sublime as I remembered it being, and Stick, which I obtained from Alan in a 1983 US Arbor House first edition (with a jacket design by Antler & Baldwin, Inc.). 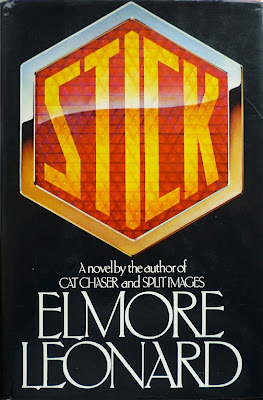 I didn't know it when I originally read it, sometime back in the '80s or early '90s – borrowed from Beckenham Library, no doubt (probably in its 1984 UK Allen Lane edition, which used the Arbor House jacket design) – but Stick is actually a sequel of sorts to one of the three novels in Dutch Treat: 1976's Swag. Swag detailed the exploits of armed robbers Frank Ryan and Ernest Stickley, Jr., alias Stick, ending – if you'll excuse the necessary spoiler – with the pair being led away by the law (prompting Stick's parting shot – surely one of the best closing lines/payoffs in a novel – "Frank, why don't you shut the fuck up?"). Stick picks up the story seven years on, with our eponymous lead now flying solo, newly released from jail and falling in with a fellow ex-con down in Miami, tagging along on a drug money drop that goes disastrously wrong. 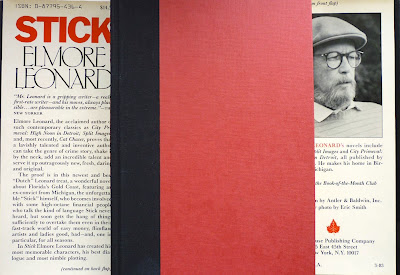 What's interesting, at least to me, rereading the book decades on, is how heavily Swag is referenced throughout – Stick repeatedly reflecting on his time as a, ahem, stick-up man (and before that car thief), even telling a few people about some of the scores he and Frank took down, and the four men he was forced to kill. Especially poignant if you've read Swag – and if you're aware of Leonard's history with alcohol (see also Unknown Man No. 89) – is Frank's fate, which is revealed early on, but there's a wistful feel to the novel as a whole – Stick, now in his early forties, thinking about the choices he's made and wondering what to do with the rest of his life.

Of course, this being an Elmore Leonard novel, there's also lashings of delicious dialogue, a wonderfully meandering plot – Stick somehow winds up chauffeuring for a wealthy stock market mogul, all the while trying to evade the unwanted attentions of a drug dealer and his henchmen – moments of heightened tension and a swift, violent climax. And Stick is a disarming presence in the narrative, as amiably appealing in his own way as Raylan Givens, Jack Ryan... or indeed the male lead of the next Leonard book I'll be looking at – another career criminal and jailbird who would, like Stick, be granted starring roles in two Leonard novels. 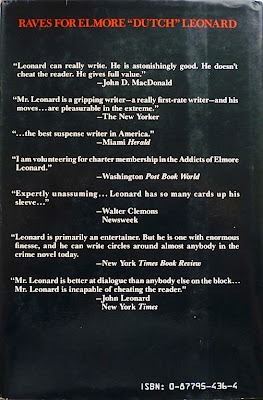