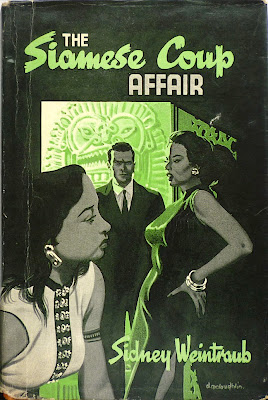 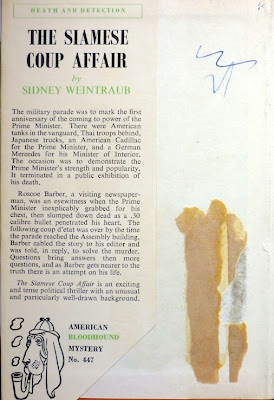 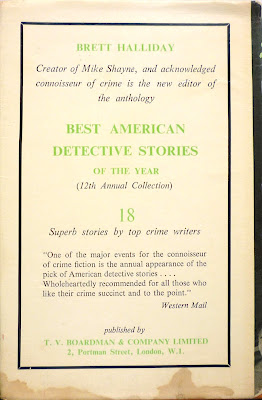 Anyway, back to The Siamese Coup Affair. And while Denis McLoughlin's dust jacket for the book isn't one of his more striking efforts, for me it's possessed of a quiet appeal. Certainly it's good enough to join its brethren in the Beautiful British Book Jacket Design of the 1950s and 1960s gallery – and I've another couple of McLoughlins waiting to follow in its footsteps. Because while The Siamese Coup Affair is the last of the Boardmans I bought off Jamie Sturgeon, it's not the last of the Boardmans I've acquired of late...
Posted by Nick Jones (Louis XIV, the Sun King) at 05:06 11 comments:

On to the second of three T. V. Boardman thrillers I acquired from book dealer Jamie Sturgeon, all of which boast dust jackets designed by the late, great Denis McLoughlin. And this next book is not only one of Boardman's select number of British Bloodhound Mysteries, as opposed to the more common or garden American variety, but it's a spy novel to boot, which again marks it out from Boardman's more traditional crime or suspense fare: 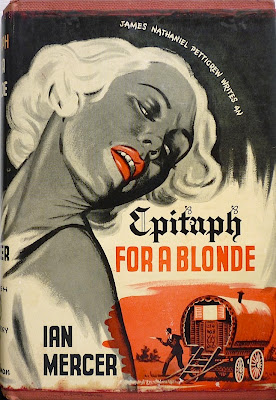 Published in the UK by T. V. Boardman in 1960, Epitaph for a Blonde is the third of Ian Mercer's three espionage novels starring James Nathaniel Pettigrew of the British Secret Service, and follows Journey into Darkness and Mission to Majorca (both 1958, and both extremely hard to come by these days). Except, as the dust jacket flap of Epitaph and James Nathaniel Pettigrew's dedicated page on Spy Guys & Gals both point out, by this juncture in the series, Pettigrew is no longer called Pettigrew, but Charles Graham, and is now a retired schoolteacher. Indeed, Spy Guys & Gals even goes so far as to speculate that Epitaph for a Blonde might have originally been "a stand-alone that the publisher forced the author to changing [sic]". Certainly Mercer wrote a number of other standalone spy and crime novels, including The Green Windmill (1945), A Man Gets Into His Tomb (1948) and Curs in Clover (also 1948), as well as, by the looks of it, some travel guides, notably Majorca on £50 (1970; evidently Mercer felt something of an affinity for the Balearic island). 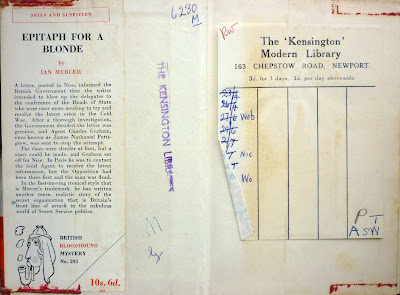 As with B. X. Sanborn's The Doom-Maker, this copy of Epitaph for a Blonde is ex-library, this time hailing from a public library in Newport, Wales which has, I believe, since closed down (the library, not the town or the country; those were definitely still open last I looked). Unfortunately Denis McLoughlin's rather nice dust jacket has suffered the indignity of losing a strip from its top and bottom where the tape affixing it to its library plastic covering has been ripped away. But never mind: it doesn't detract from the lovely artwork too much, and I've duly added it to the Beautiful British Book Jacket Design of the 1950s and 1960s gallery. 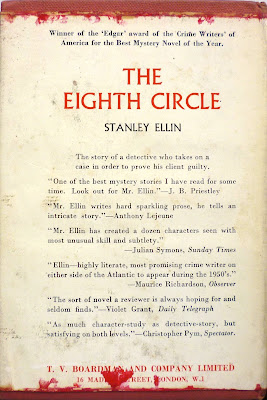 Which is, of course, what I'll also be doing with the next McLoughlin/Boardman book I'll be blogging about – a 1963 political thriller which appears to have been written by a noted economist and former member of the US Foreign Service...
Posted by Nick Jones (Louis XIV, the Sun King) at 09:31 No comments:

There are still two posts to come in the Great Tom Ripley Reread, but to mix things up a bit, and to give me a chance to finish rereading the final two Ripley novels; and since the Existential Ennui Beautiful British Book Jacket Design of the 1950s and 1960s page has been stuck at 90 covers for nearly a month; and seeing as I reviewed The Art of Denis McLoughlin last week, I thought I'd showcase some of the T. V. Boardman crime and spy first editions sporting Denis McLoughlin wrappers I've acquired over the past month or so, peppering them in amongst the final two Ripley posts and thus nudging the total number of dust jackets in the Beautiful British Book Jacket gallery a bit closer to the magic 100. And by Christ that was a ridiculously long sentence with which to begin a blog post. So let's get straight to the first of the books in question while there are still a few readers left: 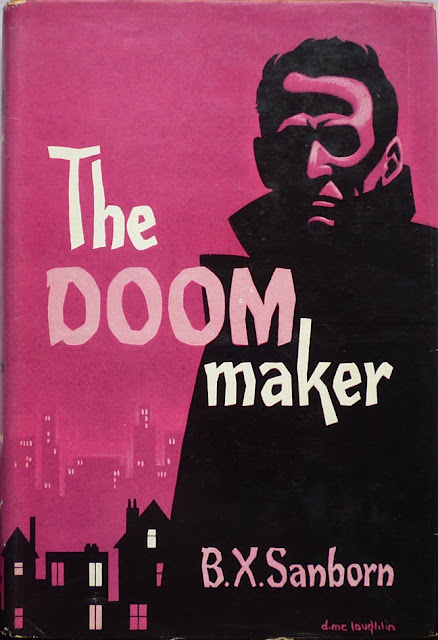 The Doom-Maker by B. X. Sanborn, published in hardback in the UK by T. V. Boardman in 1958, and #278 in Boardman's Bloodhound Mystery series. This copy came from noted book dealer and all round good egg Jamie Sturgeon, who brought it and a couple of the other Boardmans I'll be blogging about along to the last Lewes Book Fair especially for me (along with those signed Colin Forbes books) after I'd browsed through his Boardmans via a selection of photos Jamie emailed to me. I was on the hunt for espionage novels for the most part, of which Boardman published a small quantity in amongst their standard mystery and suspense fare, but The Doom-Maker caught my eye, chiefly because of its terrific dust jacket, which is a fine example of the kind of duo-tone, high contrast cover Denis McLoughlin was creating for Boardman in the late-1950s and 1960s, but also because the title and author intrigued me. 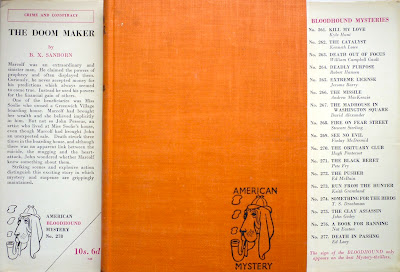 Turns out B. X. Sanborn is a pseudonym of Bill S. Ballinger, a screenwriter and novelist who penned scripts for Kolchak: The Night Stalker and Ironside and published around twenty-five crime and spy thrillers from 1948–1975. All of those novels appear to have fallen out of print, but there's a great website dedicated to Ballinger, boasting a detailed biography and bibliography. The Doom-Maker – which was retitled The Blonde on Borrowed Time for its 1960 US Zenith paperback printing – is narrated by John Perseus, an artist living in a Greenwich Village boarding house who meets the "extraordinary and sinister" Marcolf, a man who "claimed the power of prophecy", shortly after which "death struck three times in the boarding house". As is often the case with the Boardman books one encounters, this copy is ex-library, but since it came a from a public library in south Croydon, not far from where I grew up, I don't mind that at all. 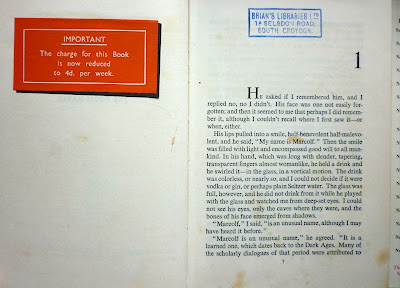 I shan't bang on about the brilliance of Denis McLoughlin again; you can read all about him in that Art of Denis McLoughlin post. Interestingly, however, on this particular wrapper he seems to have been influenced by the dust jacket of the American E. P. Dutton edition (also published in 1959) – or possibly vice versa; I haven't been able to determine which cover artist saw which artist's cover first. Either way, evidently one of them did; the two jackets are just too similar for it to have been happenstance: 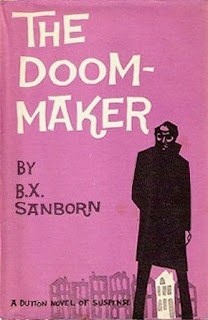 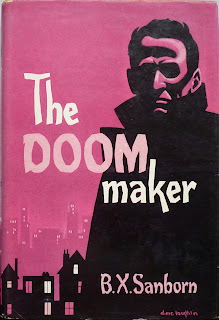 For me, McLoughlin's is the superior effort: I love the appropriately jagged typography; the subtle highlights on Marcolf's face, the hint of devilish horns in his hair and the way he occupies almost half the cover, making him more imposing; and the two planes of the cityscape in the background, which speak to McLoughlin's background as a cartoonist. But I'd be intrigued to learn if McLoughlin did indeed take inspiration from the US cover – or if the reverse is true. (Update, 2/10/12: Jamie Sturgeon just told me that the Dutton edition was published in March 1959 while the Boardman edition was published in October, which suggests that it was McLoughlin who was the one who was influenced.)

The Doom-Maker has now joined the other McLoughlin covers in the Beautiful British Book Jacket Design gallery – and it'll be followed in fairly swift succession by another striking restricted palette McLoughlin dust jacket, this one wrapping a 1960 spy thriller... 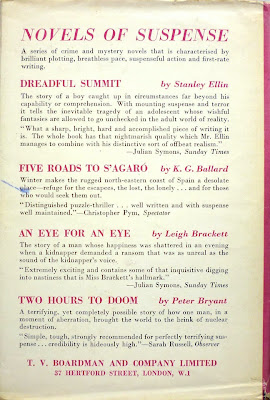