The Church of the Latter-Day Saints McBain, Zelazny, Coben, Pelecanos and Vine 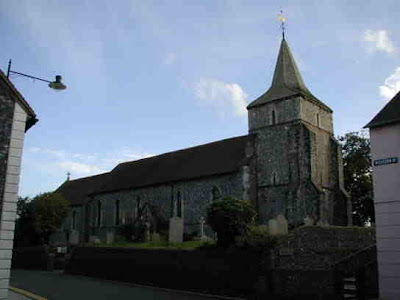 where there was a book sale at the weekend, which we pottered along to after the Lewes Book Fair. By the time we rocked up there were people leaving with bulging laundry bags stuffed with books, so who knows what bargains we missed, but even so, it was still worth going along. The books were all arranged along amongst the pews – paperbacks on the floor, hardbacks resting on those shelves you get on the backs of pews – twenty pence a book, six for a quid. Not quite sure what Our Lord would've made of the frenzied scrabble for cheap books inside his House, but I guess the money was going to a good cause (presumably, anyway; for all I know it could've gone to the vicar's fags 'n' booze fund). Needless to say I emerged with a small pile of books, as follows: 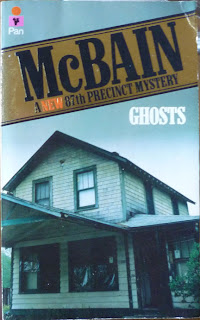 A 1982 first Pan UK paperback of Ed McBain's Ghosts (originally published by Hamish Hamilton in the UK in 1980), cover photo by Colin Thomas. I've never read any of McBain's – real name Evan Hunter – 87th Precinct novels, of which there are well over fifty I think, so I hope I don't enjoy it too much, 'cos that would mean embarking on yet another collecting marathon, which in turn would almost certainly result in my being murdered by Rachel. And: 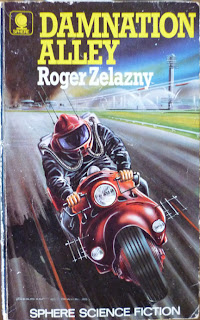 A 1973 Sphere UK paperback of Damnation Alley by Roger Zelazny (originally published by Faber in the UK in 1971), cover illustration by Gordon C. Davies. And it was the cover that grabbed my attention with this one. Look at that painting: a futuristic biker on what looks like a funky moped. How could anyone resist that? And then when I got home I read the back cover copy: 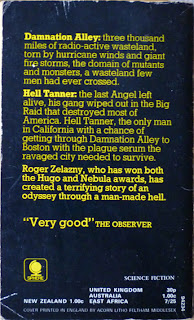 and was even more glad I picked it up. Check this out:

Damnation Alley: three thousand miles of radioactive wasteland, torn by hurricane winds and giant fire storms, the domain of mutants and monsters, a wasteland few men had ever crossed.

Hell Tanner: the last Angel left alive, his gang wiped out in the Big Raid that destroyed most of America. Hell Tanner, the only man in California with a chance of getting through Damnation Alley to Boston with the plague serum the ravaged city needed to survive... a terrifying story of an odyssey through a man-made hell.

At which point my inner child punched the air, did a triple somersault and proclaimed this potentially the best book ever written. And then my inner child caught sight of the only press quote the publishers had managed to find from the hardback edition of the book:

and promptly shut up. Not exactly a ringing endorsement there. Incidentally, there was a 1977 movie made of this book, starring Jan-Michael Vincent – of then-future Airwolf fame – and George Peppard – of then-future A-Team fame. Two (then) future '80s icons, together for possibly the first and only time. I'd never come across this particular cinematic milestone before, but apparently it was one of two science fiction films scheduled for release by 20th Century Fox in 1977. Damnation Alley was supposed to be the big hit of the two, but as it turned out, it was the other film that did rather well instead. That film? Star Wars. 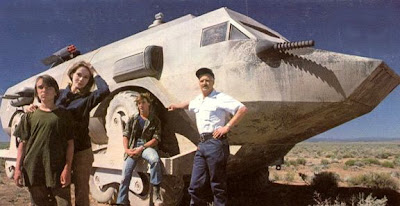 So those were the two paperbacks I bought. I also bought three hardbacks, which were also twenty pee each (yes, I know I should've added another book to make up the six-for-a-pound offer, but, y'know – I'm all about the giving, me): 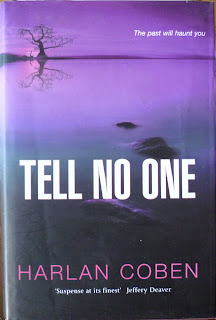 A UK hardback first edition of Tell No One by Harlan Coben, published by Orion in 2001, cover design by blacksheep. This was turned into a rather terrific – and rather successful – French film in 2006. If the book's half as good as the film, it'll be... well, probably merely OK, actually, but here's hoping it's better than that. Next: 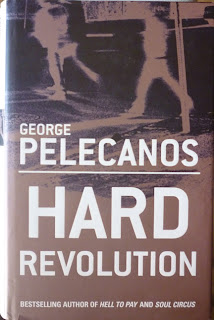 A UK hardback first edition of Hard Revolution by George Pelecanos, published again by Orion, this time in 2004, with a jacket photo by Harvey Tulcensky. To date I've only read one Pelecanos novel – The Way Home – but I've got another one, Drama City (signed, natch), waiting in the wings, and now this too. I became aware of Mr. P. through his work on The Wire (see also Dennis Lehane and Richard Price); Hard Revolution is part of his series featuring private investigators Derek Strange and Terry Quinn – except I think Hard Revolution is sort of a prequel to those, following a younger Strange when he was a policeman in 1960s Washington, DC. So I should be able to read it without reading the preceding three books in the series. 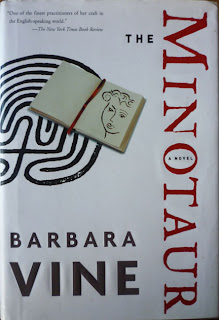 This was quite a surprise. It's a US hardback first edition of The Minotaur by Barbara Vine, published by Shaye Areheart in 2005, jacket design by David Tran. I picked it up, read the jacket copy – it's about a dysfunctional family living in a big ol' house with a mysteriously locked library – ummed and ahhed for a bit – hey, twenty pence is twenty pence – and then I noticed this on the first page: 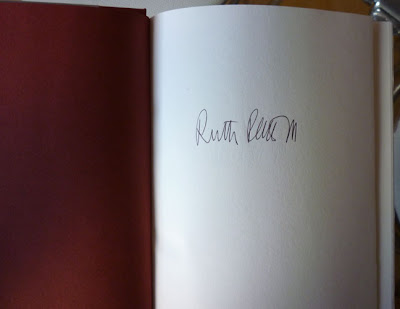 At first I thought it was a previous owner's name... but then I realised it was a signature. Ruth Rendell's signature, in fact. Which baffled me momentarily, until I remembered that Ruth Rendell and Barbara Vine are one and the same – Ruth Rendell being Barbara Vine's real name. At which point I offered Our Lord a swift prayer of thanks and hot-footed it to the nice lady taking the money.