New Arrival: The Man with the Getaway Face by Richard Stark (US Pocket Edition)

Yeah yeah, I know what you're thinking. I mean, other than, 'Who are you and why am I reading this blog?' You're thinking, 'Doesn't this guy already have a 1984 Allison & Busby UK hardback of this one, and a 1971 Coronet UK paperback of the same book (under the title The Steel Hit)?' And yes, it's true, I do. But, hopeless collector that I am, I just couldn't resist this when it popped up from a UK seller on eBay:

Because it's the 1963 US first edition, and therefore a little piece of history. The Man with the Getaway Face is the second of Donald 'Richard Stark' Westlake's Parker novels, and like, I believe, the eleven other Parkers up to and including The Sour Lemon Score, it was first issued in paperback in the States, by Pocket Books in this instance. And thus far it's one of my favourites in the series, for a couple of reasons: for the way Westlake details the meticulous, methodical planning of the heist for over half the book, and then dispenses with the crime itself (and its double-cross aftermath) in about eight pages; and for the misadventures of Stubbs, my favourite Stark Stooge. I also really like the scratchy cover illo on this paperback, by one Harry Bennett.

The original American first editions of the Parker novels don't crop up on eBay too often, at least not from UK sellers, so I'm glad I nabbed it. Even though I do now have three different editions of the same book...

Here's something a bit different; this turned up yesterday, a late birthday present from my friend Adam:

A 1961 US Monarch paperback biography of Elizabeth Taylor by one John B. Allan – "first publication anywhere", as it helpfully states on the cover, with the alluring tag line, "The fascinating story of America's most talented actress and the world's most beautiful woman" – which makes it sound slightly as if the book's an expose of a lesbian romance between Liz and another (unnamed, but apparently beautiful) woman.

So the obvious question here is: why on earth would I be interested in this book? And indeed I was similarly perplexed when Adam told me he'd got it for me, standing, as we were, in a queue for the toilet at a London pub over the weekend. Probably not the strangest conversation I've ever had in a pub loo queue, but certainly right up there. Thankfully, Adam later explained why he'd got it for me: John B. Allan was one of Donald Westlake's many pseudonyms, alongside the likes of Tucker Coe, Alan Marshall, and, of course, Richard Stark. And actually, reading the first line of the book, you can really feel that Westlake/Stark touch:

"When Richard Burton walked in the room, Liz threw the whiskey bottle at him."

OK, I made that up; the Taylor aficionados out there would of course know that Liz didn't meet Burton until the filming of Cleopatra, which happened after this book was written. (In fact, this brief volume begins with an account of Liz's brush with death in a Dorchester hotel suite in 1961, which in its own way is a very Westlake starting point.) Anyway, it's a splendid curio, and not readily available this side of the pond, so thank you very much, Adam!
Posted by Nick Jones (Louis XIV, the Sun King) at 06:26 4 comments:

Aaaaaand we're back. Not a great week for new comics this week. There's only one definite for me, which is this: 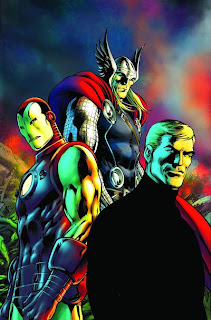 Brian Michael Bendis and Alan Davis' Avengers Prime #1. This will apparently send Captain America, Iron Man and Thor off on a multidimensional adventure during which the rift between the characters will be healed, a kind of deck-clearing exercise so that the recently launched Avengers #1 doesn't have to deal with all the emotional baggage. What baggage? What rift? Well, the fact that Cap and Iron Man were on opposing sides during Civil War, and that Iron Man and Mister Fantastic (from the Fantastic Four) created a clone of the at-the-time MIA Thor which then killed Giant Man. Like that. Then again, Iron Man wouldn't remember any of that because his mind was subsequently wiped (by, er, himself) and the memory reinstall conveniently only went up to just prior to Civil War. Good lord, comics are complicated. Anyway, it's Alan Davis drawing it, so it'll look gorgeous.

Other than that, I might give these a look:

iZombie #2. I quite enjoyed the first issue of this – wherein gravedigger Gwen is actually dead herself, and has to snack on the occasional brain – so let's give the second one a go, shall we?

Red Hood Lost Days #1. This one's much less certain a buy. Judd Winick, who wroted this, also wrote the run of Batman where former Robin Jason Todd came back from the dead and made Batman's life a misery, which I liked at the time. Since then the character's been completely mishandled (typical for DC Comics these days really), but I'm still intrigued to see what Winick does with Jason/Red Hood.

Superman Batman Annual #4. I don't know why I'm interested in this. Paul Levitz is a dated writer, I was never into Batman Beyond... and yet... no, no idea why I want to check this one out. So I probably won't. Apologies for wasting your time there, but evidently I needed to work through that one.

In other news, I went up in my ma and pa's loft at the weekend and dug a bunch of stuff out, including this:

The complete collection of the Judge Dredd story The Apocalypse War, which originally ran in 2000 AD in the early '80s. It also includes the preceding story Block Mania, which sets up the events of the Apocalypse War.

Mick McMahon artwork there. These were the golden years for 2000 AD, stories like this and Cursed Earth and Necropolis (I also retrieved my collections of Necropolis – and the Dead Man collection which precedes it – from the loft). I was reading 2000 AD at the time, and have fond memories of this stuff, most of which was written by Alan Grant and John Wagner (with some by Pat Mills). I remember this scene being quite shocking at the time: 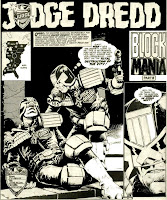 That's the death of Judge Giant, as depicted by Steve Dillon. Giant was a regular supporting character in the Dredd stories, so to see him offed like this was jarring. Reading the comics again, the manic energy that informed them is still apparent, with death and destruction on an awesome scale. I've just got to this part of the Apocalypse War storyline: 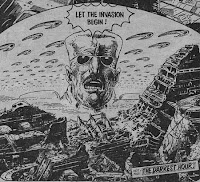 where East-Meg One has unleashed its nuclear arsenal on Mega-City One, wiping out a third of the sprawling metropolis, and the invasion is about to begin. It's fantastic stuff, the whole thing drawn by Carlos Ezquerra, full of mayhem and black comedy, utterly unlike American comics, where this kind of gleeful demolition and giggling mass-murder was unheard of (although less so these days). (Oddly, there's a switch in tense in the captions from Block Mania to Apocalypse War, from past to present, which makes Apocalypse War seem more vital and urgent somehow. Tenses in comics are a bit of a bugbear of mine, and I probably wouldn't have noticed at the time, but it makes quite a difference now.)

Anyway, I'm thoroughly enjoying this at the moment. Necropolis next...?