I'll have news on further eBay auctions very soon, should anyone be interested, but in the meantime I've some more inscribed books I'd like to blog about. Like this one: 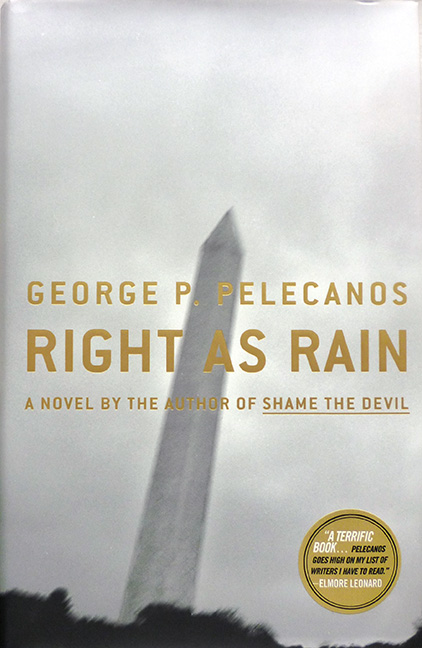 An American first edition/first printing of Right as Rain by George P. Pelecanos, published by Little, Brown in 2001, dust jacket design by Paul Sahre incorporating a photograph by Michael Northrup. Pelecanos's ninth novel, it's also the first in his three-book series starring Washington, DC cops-turned-private investigators Derek Strange and Terry Quinn (there are a couple more books which feature just Strange), and details how the two met: Strange is hired to look into the shooting incident which left an off-duty black cop dead and saw Quinn leave the force. I liked it a lot, at least as much if not more than the other Pelecanos novels I've read (namely The Way Home, 2009, The Cut, 2011, and What It Was, 2012); it unfolds at a deliberately measured pace and Strange in particular is a compelling creation, a generally decent man whose major fault is an unwillingness to confront his own self-destructive tendencies. 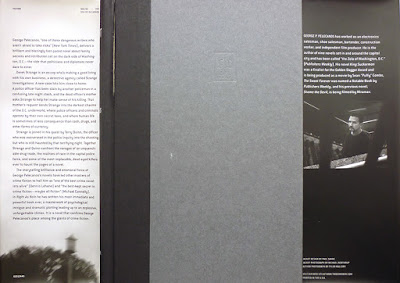 I came across this copy in the bargain basement of Any Amount of Books on Charing Cross Road, London, at the start of the year, priced at £4 – possibly at oversight on the part of the proprietors, who perhaps overlooked the presence on the title page of Pelecanos's signature and an accompanying inscription – "With admiration" – to his fellow crime novelist John Harvey: 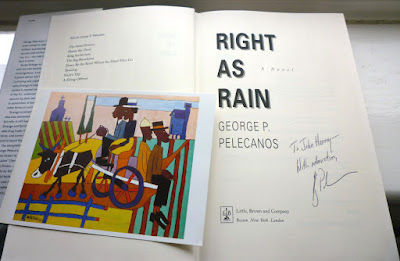 Now, it's fair to say that signed Geoge Pelecanos books aren't exactly hard to come by: AbeBooks alone lists well over a thousand books flat signed by Pelecanos, with prices starting at a few pounds, and I imagine there are hundreds more available on eBay, Amazon Marketplace and on the websites and physical premises of any number of bookshops. (I myself own two flat-signed Pelecanos first editions: the aforementioned What It Was and a 2005 British first edition of Drama City). However, books which have been both signed and inscribed by Pelecanos – if that's the sort of thing which floats your boat (which it does mine) – are in rather shorter supply – there are more like 70 of those listed on AbeBooks at present – and signed and inscribed association copies are positively uncommon, with, as I type, just two such items listed online, one priced at over £150, the other at over £300. So I'm pretty pleased with my four quid score.

By the way, the postcard resting on the 'Also by' page, depicting William H. Johnson's Going to Church, hails from the Smithsonian American Art Institution in Washington, and was slipped inside the book, which makes me wonder whether it was enclosed by Pelecanos himself – being, as he is, a resident of DC – or perhaps by Harvey on a visit to the city; indeed, maybe that's how the book came to be inscribed.* 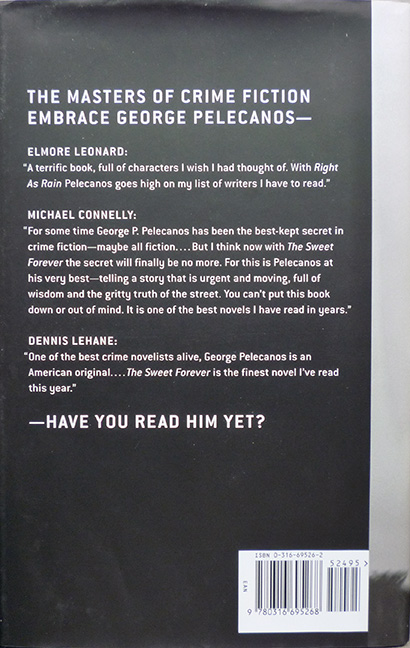 One of the blurbs on the back of the book is by Elmore Leonard, a writer of whom Pelecanos is an admirer – among his favourites are Valdez is Coming (1970), which actually gets a mention in Right as Rain (Terry Quinn, who's working in a used book store, tells Derek Strange it's "just about the best" western), Swag (1976) and Unknown Man No. 89 (1977; Pelecanos references that one in The Cut) – and also, arguably, his most direct descendant, both stylistically and in terms of subject matter and even characters. (Two of the bad guys in Right as Rain, Ray Boone and his "daddy", Earl, wouldn't be out of place in a Leonard story.) And it's to Leonard that I'll be turning next, with an inscribed copy of a brilliant and unjustly overlooked novel, written in the mid-1970s but not actually published until the mid-1980s.

* Addendum: Shortly after I posted this I made contact with John Harvey on Twitter. John confirmed that the postcard was his – "that artist has long been a favourite" – and furthermore that George Pelecanos was also a favourite and that John hadn't intended to part with this copy of Right as Rain at all; it had got mixed up by mistake with a bunch of unwanted books – "rejects & doubles, or so I thought!" – that John sold a year or so ago. In light of which, I've offered to return Right as Rain to John, and John has kindly agreed to inscribe one of his books for me. Exactly which book, I'll reveal down the line.
Posted by Nick Jones (Louis XIV, the Sun King) at 06:50 5 comments: