Book Review: The Boys from Brazil by Ira Levin; the Original Novel (Michael Joseph, 1976), Basis for the 1978 Movie 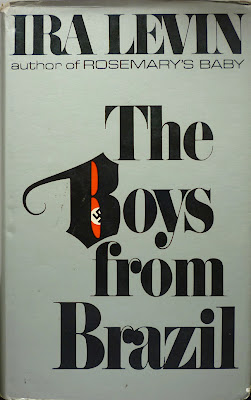 First published in the UK by Michael Joseph in 1976, Ira Levin's The Boys from Brazil is the story of a crazed quest by Josef Mengele – the Angel of Death, and the basis for Christian Szell in William Goldman's Marathon Man – to bring about the Fourth Reich, and of the efforts of Nazi-hunter Yakov Liebermann – modelled by Levin on real life Nazi-hunter Simon Wiesenthal – to stop him. There's much more to the book than that, of course – it's well written, quietly stylish and pacy, and even if you know the central conceit behind the story – which I'm not going to spoil, other than to say it involves cloning – the cat-and-mouse game between Mengele and Liebermann effectively ramps up the suspense, climaxing with a bloody battle of wits in a remote farmhouse. 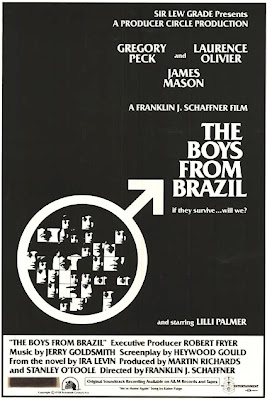 But at root, The Boys from Brazil is a brilliant idea, one that's perfect for a film – which is precisely what it became (adapted fairly faithfully; there are only a few relatively minor changes) in 1978, directed by Planet of the Apes' Franklin J. Schaffner and starring Gregory Peck as Mengele, Laurence Olivier (him again) as Liebermann (renamed Ezra Lieberman, one "n") and featuring a young Steve Guttenberg in one of his earliest roles. Indeed, despite only having written four novels prior to Boys, Ira Levin already had serious form with adaptations of his work: A Kiss Before Dying (1953), Rosemary's Baby (1967) and The Stepford Wives (1972) had all been filmed (and A Kiss Before Dying would later be remade) to great success, while after a fifteen-year gap Levin would find himself in favour in Hollywood once again with Sliver (1991), adapted for the screen in 1993 – said adaption becoming mildly notorious for a racy Sharon Stone/William Baldwin sex scene. 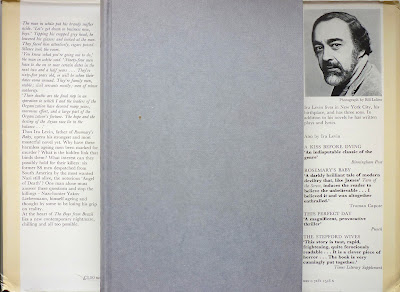 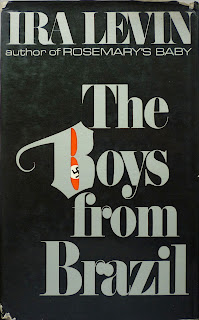 A big part of the reason for Levin's Hollywood success is that his novels are perfect one-line high concept movie pitches: "Disgruntled suburban husbands replace their wives with robots"; "A woman learns her unborn baby is the devil", and so forth. Chuck Palahniuk put it another way when he said that Levin's novels were "a smart, updated version of the kind of folksy legends that cultures have always used" – basically what Stephen King, who called Levin "the Swiss watchmaker of suspense novels", would be doing slightly later. Certainly The Boys from Brazil adheres to both those edicts, benefitting additionally from its use of real people in the narrative, which helps to anchor some of the more fantastical elements of the story. Mind you, cloning might have seemed far-fetched back in 1976, but it's rather less so now.

Speaking of mixing fantasy and reality, there's a fair amount of that going on in the final book-and-movie I'll be looking at: a World War II-set tale of a daring raid on Great Britain by German troops attempting to kidnap a world leader. Moreover, the copy of the first edition of the novel I'll be showcasing is pretty special, and acts as a precursor of the next series of Existential Ennui posts...

Before that, though: an unscheduled review of a pseudonymous '60s Donald E. Westlake novel...
Posted by Nick Jones (Louis XIV, the Sun King) at 05:35