It's perhaps a measure of the neglect Existential Ennui has suffered in recent times – on my part I mean; whatever commensurate neglect there's been on the part of the readership is neither here nor there – that I haven't updated my Beautiful British Book Jacket Design of the 1950s and 1960s page in well over a year. That's partly down to my gravitating more towards science fiction from the 1970s and later in my collecting and reading over the past few years, and as a consequence acquiring fewer books that fit with that 50s/60s theme; but it's not the whole story. As I mentioned last May, the blogging muse, such as it was, rather deserted me in 2018; so while I have still been picking up books here and there, the wrappers of which have been eminently suitable for Beautiful British Book Jacket Design, I haven't been able to summon the impetus or enthusiasm to blog about them.

This year, however, the muse has seemingly made a marginal return. I managed two posts in January – a nascent series called 80s Comics Cavalcade, which I hope to continue – and am keen to maintain that momentum, however faltering it may be. To that end, I thought I'd increase 2019's post tally by showcasing a few finds which I'm adding to the aforementioned Beautiful British Book Jackets page, starting with a small haul from one of Brighton's flea markets last year – small but, I feel, given the piddling prices paid, impressive, especially this book: 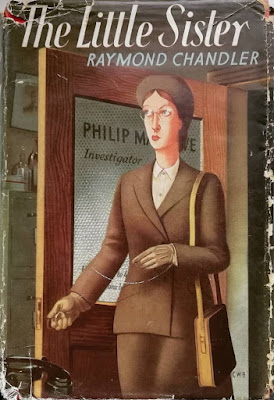 A British first edition/first impression of Raymond Chandler's The Little Sister. Published in hardback by Hamish Hamilton, strictly speaking its issue date of 1949 should disqualify it from inclusion in Beautiful British Book Jackets of the 1950s and 1960s; but I've made exceptions before, and its wrapper, by Cecil Walter Bacon, is too good not to include, especially as it makes a nice companion to the two other CWB jackets on the page. 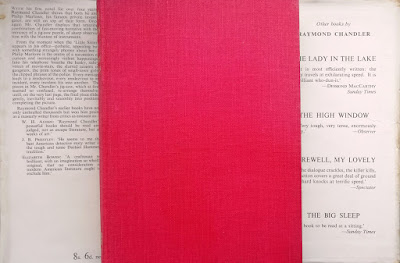 The fifth of Chandler's Philip Marlowe novels, The Little Sister is quite a valuable book in British first (the true first of the book, as it preceded the American first by three months), especially in its original dust jacket, even a somewhat chipped and worn one as here. When I spied this copy on the shelves of the bijou book stall in the flea market, I couldn't quite credit what I was seeing, but on closer inspection I realised it was indeed a British 1st/1st, and with a ludicrously low price pencilled on its front free endpaper. I've come across some real bargains in my time collecting books, but this is by far my biggest find: the closest comparable copy I can see online is listed at £375 –  rather more than the £3 I paid. 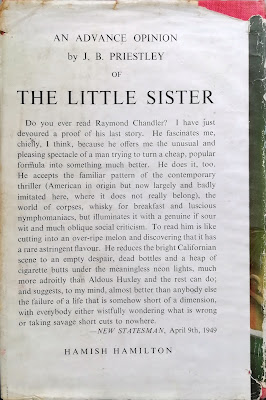 The other two books from this haul aren't in quite the same league as the Chandler, but they are both pretty scarce and fairly valuable. Probably scarcest of the two, at least in first edition, is this one: 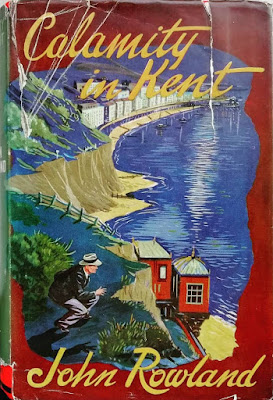 Calamity in Kent by John Rowland, published by Herbert Jenkins in 1950. One of two Rowland novels reissued by the British Library in 2016 under their Crime Classics imprint (the other being 1938's Murder in the Museum), Calamity in Kent is an entry in Rowland's series of novels featuring Inspector Shelley (and one of the last he published), and is set in the fictional Kentish coastal town of Broadgate, a name which Rowland presumably arrived at by shmooshing Broadstairs into Ramsgate. As a Kent man myself (originally – I suppose I'm more of a Sussex sort these days), I can only commend this act of geographical commingling. 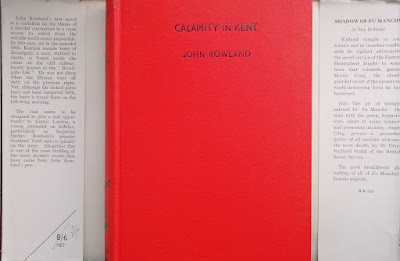 John Norris of Pretty Sinister Books wrote about Rowland back in 2016, so head to that post if you want to learn more about the author. What concerns us here is the dust jacket of the first edition, which was designed by an H. T. Watts... although I've been able to find out very little about him, if indeed he is a him. I do know he also designed the wrappers for the 1950 Jenkins edition of Leonora Starr's Azaleas on the Hill and the 1950 Sampson Low, Marston & Co edition of Paul Townend's The Modern World Book of Wonders, but beyond that, I've drawn a blank. I did wonder if H. T. Watts might have been related to the publisher Charles Albert Watts, for whom I believe John Rowland worked at one time, but that's barely even conjecture on my part. 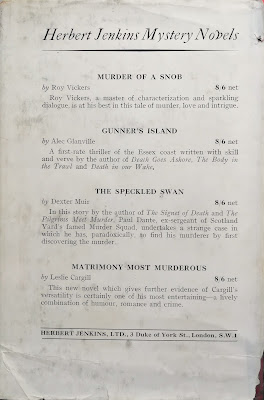 One note, however, before we move on to the final book in this haul: there was a John Rowland designing dust jackets in the 1950s and 1960s – I wrote about him here, and his work is featured on the Beautiful British Book Jackets page. Were Rowland the author and Rowland the illustrator and designer one and the same? As ever, if anyone can shed any light, do please leave a comment.

At present I can't see any jacketed firsts of Calamity in Kent for sale online, so the £2 I paid for mine, even with its torn wrapper, has to be considered something of a steal. As does the £3 I paid for this book: 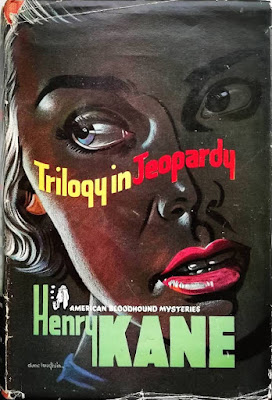 A British first edition of Trilogy in Jeopardy by Henry Kane, published by T. V. Boardman in 1955 – #113 in the publisher's American Bloodhound Mystery series. I've written about Boardman, and the designer of most of their dust jackets and book covers, Denis McLoughlin, many times, so I shan't tarry here; follow the links for more on both. This particular book, a collection of three of Kane's Peter Chambers P.I. stories (namely "Slaughter on Sunday", "One Little Bullet" and "Skip a Beat"), is in very short supply online: I can see a couple of jacketed copies in the US priced at around £40, but that's it. 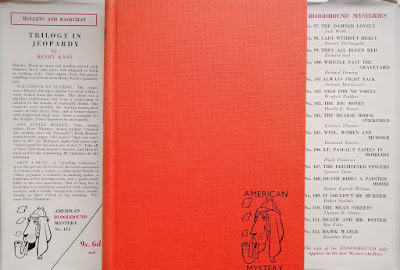 I've added all three of those wrappers to Beautiful British Book Jacket design of the 1950s and 1960s, but blogging about Trilogy in Jeopardy has reminded me that I have some other McLoughlin-wrapped Boardmans to add to the page. I shall endeavour to do that at the earliest opportunity. 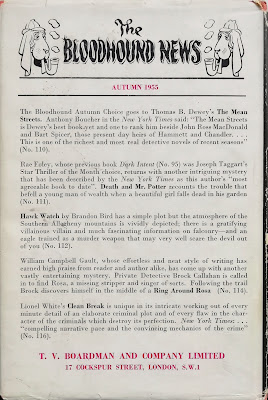