What I Done Got This Week

Ever felt like you're talking to yourself? That's what writing this blog is like. But if I am just writing it for myself, then I guess it can act as a diary of my various obsessions and how they wax and wane in comparison to each other. At present, as I've outlined more than once, book collecting is floating my boat more than comic collecting. But I did go to the comic shop this week, after giving it a miss last week, and here's what I got:

Dark Avengers is a holdover from last week, and having read it on the train, I wouldn't have missed it much if I hadn't got it at all. There were a few others from last week (and this week) I didn't but, either 'cos they'd sold out, or I couldn't be arsed:

So that's four more comics I won't be getting anymore. And y'know what? I don't think I'll miss 'em. Little by little, I'm chipping away at my comics habit...
Posted by Nick Jones (Louis XIV, the Sun King) at 09:38 No comments:

The Tremor of Forgery

Speaking of Patricia Highsmith, I finished The Tremor of Forgery recently, and found it a really unusual book. It's not a crime novel really, although there is an unconfirmed killing in it. It's much more about one man losing his moral compass, or rather questioning what morality is. It's incredibly internalised: Howard Ingham, the 'hero', is in Tunisia writing a book, and there are long passages where he turns events (both 'real' and in his novel) over in his mind. The book isn't written in the first person – I don't think any of Highsmith's books are – but we really get inside Ingham's head, and, in that brilliant way of Highsmith's, start to accept a kind of amoral view of the world. You're almost lulled into it; the writing's so matter-of-fact that questionable thoughts and acts become somehow everyday, acceptable even. But what's really interesting about the book is that, essentially, nothing much happens. Ingham writes his novel, meets a few people, goes on a few trips, eats, drinks, and thinks. The one 'death' we witness impacts on Ingham's state of mind, but not in an obvious way. It's something he returns to, mulls over, but it's one of many things: his work, his relationships, his sexuality. It's a fascinating novel.
Posted by Nick Jones (Louis XIV, the Sun King) at 14:35 No comments:

Two treats waiting for me when I got home today: 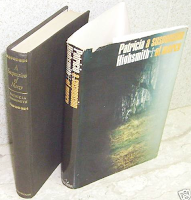 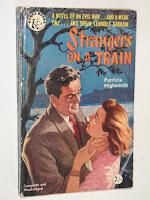 A 1965 first UK edition of Patricia Highsmith's A Suspension of Mercy, and a first UK paperback edition of her debut novel, Strangers on a Train. Both nabbed on eBay for a very reasonable price. And in other Patricia Highsmith news, I should soon have a full set of Ripley first editions (with the exception of Talented, which I have a nice 1960 Pan edition of), with both The Boy Who Followed Ripley and Ripley Under Water hopefully winging their way towards me soon.

And at this point I should probably stop buying books for a while. I've got quite enough to be getting on with, and really the only book I'm currently keen to get is Kingsley Amis's The James Bond Dossier. I've got my eye on a copy of that on eBay, twinned with his Book of Bond. But then that's it. Really.

For a while anyway.

Oh sod it. I'm an inveterate collector. If it's not books it's comics; if it's not comics it's records; and if it's not records it's DVDs. At least with books I'm bettering myself slightly, expanding my horizons through fiction. Yes, I do actually read the books I buy, not just stick 'em on a shelf. Although they do look good on the shelf...

But yes. There are no local book fairs until next year, so it's time to regroup, take stock, and try and make headway with the books I do have. I'm nearly done on Stephen King's Under the Dome, and am also partway through Live and Let Die (James Bond has just had his first encounter with Mr. Big). Under the Dome has been great, although a strange thing: as with Cell, King hasn't really imparted a description of the ostensible hero, Dale Barbara. I've got a mental image of him as a black man, even though I'm almost positive he's not. It just feels right to me that he is, and King hasn't described him at all, so far as I can recall. Which is odd, as I'm pretty sure King's at least sketched the appearances of all the other characters in the book.

And after these two, I think I'll try Kingsley Amis's The Green Man and Highsmith's afore-mentioned Strangers on a Train next. And dip back into the Highsmith biography I started. Ah, sweet anticipation.
Posted by Nick Jones (Louis XIV, the Sun King) at 14:06 No comments:

book fair was another charming provincial affair. A decent-sized hall with maybe twenty dealers there. I got there early and stood in the short queue, and I recognised the two guys in front of me: they had a table at the Rye book fair the weekend before, selling rare children's books. One of them must have slightly recognised me too, because he turned around and asked if I had a ticket. I said no, and he gave me a spare one! Very nice of him. Once inside I did a few circuits, picked up something for Rachel for Christmas, and also bought a hardback first edition of the 1990 revised version of Stephen King's The Stand, which may well be my favourite ever book. I recall borrowing this version from the local library years ago, and reading it twice through. Flicking through it on the train on the way home I still remembered so much of it vividly, even King's introduction, where he explains why he decided to publish this extended edition (basically because lots of fans asked for it, and the original was only cut back in length because the accounts people wanted to keep the price down). So, another lovely book for the shelves.