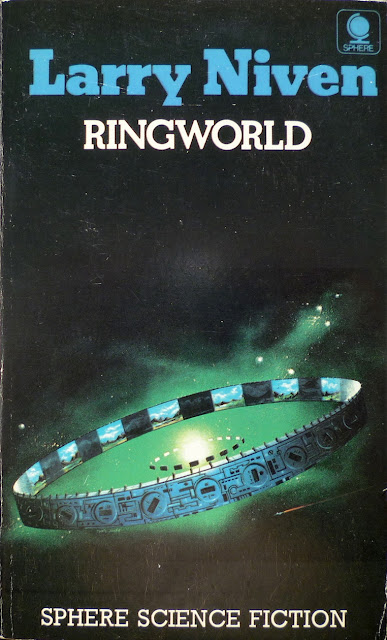 Mission accomplished: I've completed my maiden voyage through Larry Niven's Known Space. Actually I reached, and explored, my final destination, Ringworld (1970), a little while ago, but this is the first opportunity I've had to even think about writing anything about it and the book that preceded it on my route, Neutron Star (1968). Of the two, I much preferred Neutron Star, a collection of mid–late-sixties short stories set mostly in the 27th century, half of them starring 'crashlander' Beowulf Shaeffer; I especially liked the title story and "At the Core", which respectively detail Shaeffer's excursions to a neutron star and the galactic centre (the latter a journey also undertaken by Jerome Corbell in 1976 novel A World Out of Time, another favourite of mine from Niven's oeuvre). In fact I liked the collection so much that I wound up with four different editions of it, two of them signed. 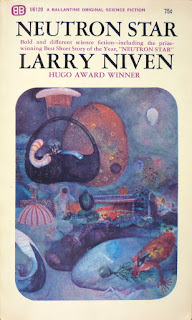 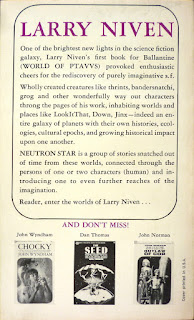 The American first edition was published in paperback by Ballantine in 1968, under a cover sporting near-abstract art that's uncredited but reminds me of the work of Richard M. Powers. I bought this pristine copy at the London Pulp and Paperback Fair last year (from Jamie Sturgeon I believe). 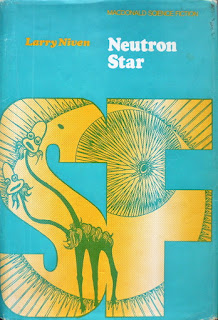 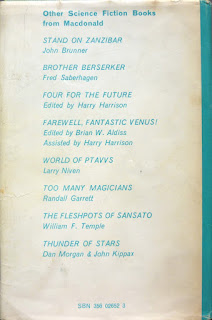 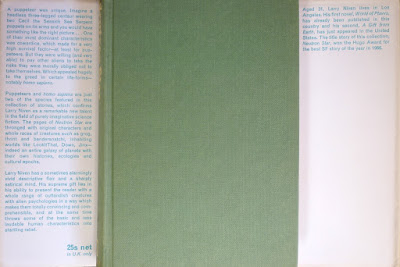 The British first edition, published in hardback by Macdonald in 1969, also has an uncredited dust jacket, but the design is the same as other books in the publisher's science fiction line around this period – a large 'SF' outline with an illustration inside it (actually not a bad stab at a Pierson's Puppeteer in this instance), probably all by the same artist; see also the Macdonald editions of Niven's World of Ptavvs and A Gift from Earth, John Brunner's Stand on Zanzibar, Ursula K. Le Guin's The Left Hand of Darkness, Piers Anthony's Chthon (a copy of which I own) and many others. I bought this ex-Army Library copy (with very minimal markings) online for a tenner, a pretty good price considering comparable copies are more like fifty quid. 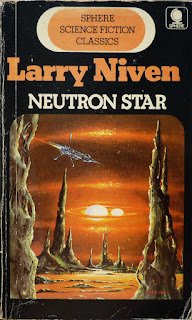 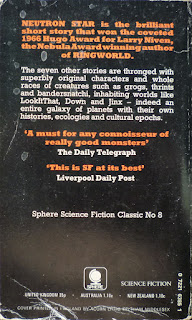 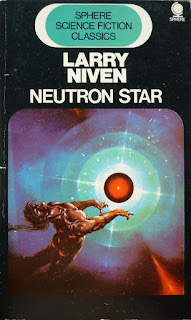 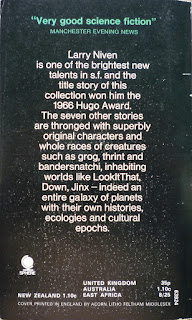 The signed copies are both 1972 second printings of the 1971 Sphere paperback edition... but with different covers, sporting different paintings by Eddie Jones. I can't quite work out why there are two versions of the Sphere second printing. Steve Holland gives the second one an issue date of 1976, but that doesn't match the copyright page of my copy, which definitely states "Reprinted 1972", the same as the other copy. (The Internet Speculative Fiction Database also lists both as 1972 printings.) Answers on a postcard, or in the comments, please. Anyway, each copy has been signed by Niven on the title page (with a "To Brian" in the one with the planetary landscape painting on the cover), and each set me back just a couple of quid. 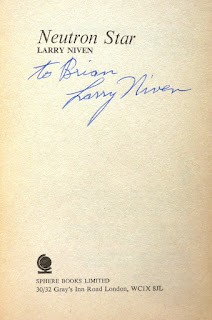 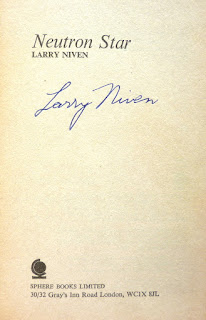 Incidentally there's a Star Trek connection (isn't there always these days) with Neutron Star, because one of the stories, "The Soft Weapon", was adapted by Niven (at the request of Gene Roddenberry, after D. C. Fontana brought Niven on board) into a Star Trek: The Animated Series story, "The Slaver Weapon". Much of it survives in the episode, including Known Space concepts like Slavers, stasis boxes, and the Kzinti. And there's another Trek connection with these particular editions: Eddie Jones also painted the covers of the final three James Blish Trek novelisations, both of Joe Haldeman's original Trek novels, and the first two volumes of The New Voyages. (Blish has been on my mind of late because there's a big piece on him, featuring an interview with his wife Judy – alias J. A. Lawrence – in the next Star Trek Magazine, out November in the US and December in the UK; I also review Blish's 1970 novel Spock Must Die! in the same issue.) 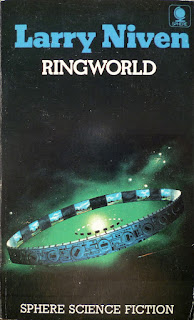 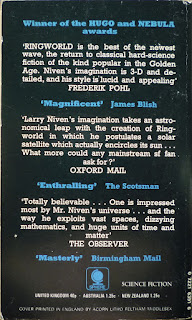 Another cover that Jones illustrated was the 1973 Sphere edition of Ringworld, i.e. the first British paperback edition – a very nice copy of which I found online dead cheap – and the first to show an image of the Ringworld itself on the cover (the jacket of the Gollancz first edition is typographic). Unfortunately Jones' painting misconstrues the topography of the Ringworld, much as Dean Ellis does on the 1970 US Ballantine first edition: both artists depict the interior at a right angle to the Ringworld's edge. A better representation of the nature of the Ringworld can be found with Donato Giancola's painting on the cover of the mid-1990s Del Rey paperback edition, a copy of which I came across in a charity bookshop in Uckfield. 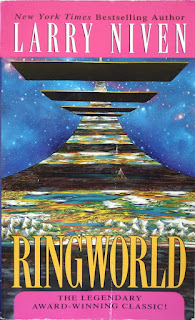 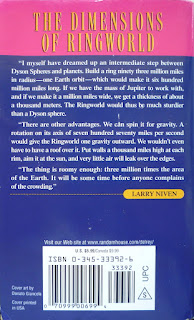 For anyone minded to try Ringworld, I would recommend reading Neutron Star first, partly for the reasons outlined by Tor.com – doing so affords a better understanding of the concepts and characters and lends depth to the novel's revelations – but also because it's the better book. Ringworld, while terrific in bits – mostly the bits to do with the magnificent scale of the setting and the relationships between the protagonists – for me dragged a little as Louis Wu, Teela Brown, Nessus the Puppeteer and Speaker-to-Animals the Kzin made their way across the landscape. Your mileage may vary, depending on how into world-building you are.

So that's me done with Known Space... although I am thinking of reading the sequel to Ringworld, The Ringworld Engineers (1980), soon. Ahead of that, though, I've started exploring another future history, one commonly referred to as the CoDominium...