I guess I could've presented this next Elmore Leonard novel as part of last year's series of posts on books which begat perhaps more famous movies; I certainly had the book in question to hand back then, having bought a British first edition in Camilla's secondhand bookshop in Eastbourne not long before, and I'd seen the 1998 Steven Soderbergh flick it begat. Unfortunately, at that point, I hadn't read the novel. (Another Elmore Leonard book-to-film adaptation made it into that series instead – 1974's Mr. Majestyk.) However, I have now – as part of my ongoing Elmore Leonard readathon – so let's take a look at it: 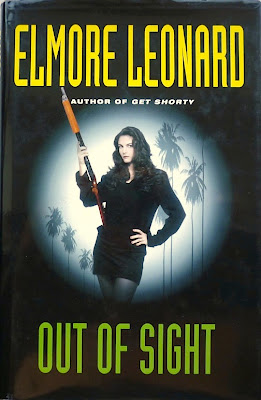 Out of Sight, published by Viking in 1996 under what can only be described as a bloody awful dust jacket – design uncredited, possibly to spare the embarrassment of the designer. The almost-as-crappy front cover photo is credited, however, to one Colin Thomas, who should perhaps have been made aware prior to the shoot that the novel's female lead, federal marshal Karen Sisco – I assume that's her holding the shotgun – is in fact blonde. Sigh... (Mind you, Jennifer Lopez wasn't especially blonde in Soderbergh's Out of Sight movie, and Carla Gugino was decidedly brunette in the short-lived 2003 Karen Sisco TV series, so in that respect the cover photo might charitably be termed prescient.) 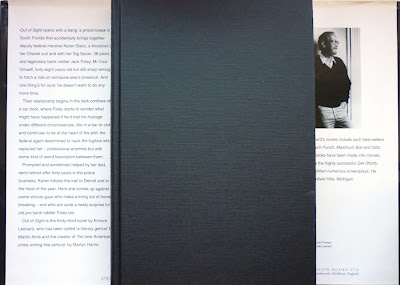 Shonky '90s cover design aside, in the Elmore Leonard oeuvre Out of Sight follows two of my favourites of the author's works – Pronto (1993) and Riding the Rap (1995), both of which, possibly not entirely coincidentally, also feature a US marshal (one Raylan Givens, of Justified fame); evidently the United States Marshals Service was much on Leonard's mind in the mid-1990s. But Out of Sight is only partly Karen Sisco's story; her co-star is Jack Foley, a serial bank robber who busts out of the Glades Correctional Institution in Florida at the start of the book and elects to kidnap Karen – who's outside the prison, waiting to serve a summons to an inmate – depositing both her and himself in the trunk of the car his cohort Buddy has brought along to aid his escape.

All this is set against a background of a bigger breakout by a bunch of Cubans which, I learned thanks to a fascinating 1996 New Yorker article on Elmore Leonard's researcher, Gregg Sutter (kindly sent to me by Book Glutton), Leonard based on a real life Glades prison break from 1995, when six inmates escaped via a tunnel they'd dug from the prison chapel to the other side of the perimeter fence. And it turns out Jack too is based in part on an actual person: a man Sutter interviewed who according to the article "had escaped from more prisons in Florida than anyone else", and whose ability to control his emotions during a prison break (essentially by acting: "You act cool," he told Sutter, sounding not unlike an Elmore Leonard bit-part player, "you going to be cool") Leonard responded to and applied to Jack.

That said, to my mind Jack lacks the depth of some of Leonard's other ne'er-do-wells – the introspective Ernest Stickley, Jr. from Stick, say, or the confused, conflicted Jack Ryan from The Big Bounce and especially Unknown Man No. 89. Foley is by comparison a fairly unreconstructed sort, both as a criminal and as a person, and therefore perhaps less interesting as a character. But his studied cool works a treat on Karen: their mutual attraction – infatuation, even – drives the, admittedly meandering (in typical Leonardian fashion), narrative, all the way to a climactic ill-advised Detroit home invasion where the bodies stack up and Karen draws a definite line under their curious relationship.

As would become evident over a decade later, however, Leonard wasn't quite done with his charming recidivist; inspired by George Clooney's turn as Foley in the Out of Sight film (recently picked by The Playlist as the best Elmore Leonard movie adaptation), he brought Jack back in the 2009 novel Road Dogs... although before we get to that book, a necessary detour is in order: namely Leonard's 1983 Edgar Award-winning novel LaBrava, and a very special edition thereof... 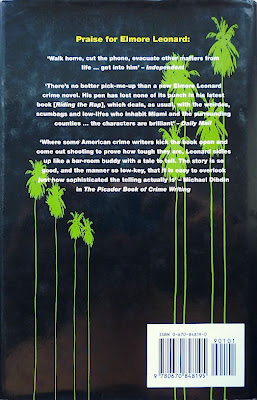