Larry Niven's World of Ptavvs, Protector, and A Gift from Earth: A Known Space Route to Ringworld 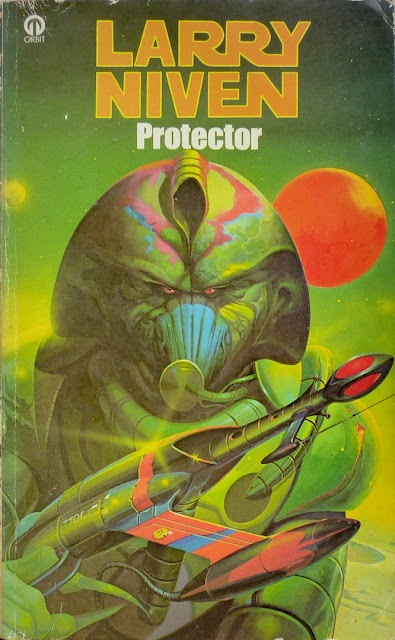 There are myriad routes through Larry Niven's Known Space – different stories have been published in different configurations in different collections and as different novels at different times over the past fifty years – but the one I've been following has been guided partly by original publication, partly by chronology. I started with World of Ptavvs (1966, Niven's debut novel, set in the 22nd century); then made my way through Tales of Known Space (1975, containing stories from across the entire 2,000-year Known Space future history timeline); then the three-story collection The Long ARM of Gil Hamilton (1976, set on 22nd-century Earth); the novels Protector (1973, set in the 22nd and 24th centuries) and A Gift from Earth (1968, set in the 25th century); then the collection Neutron Star (1968, featuring stories set largely in the 27th century), and I'm currently reading Ringworld (1970, set in the 29th century). 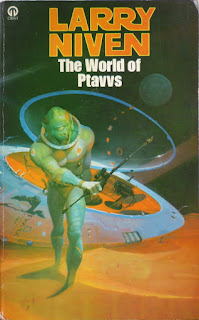 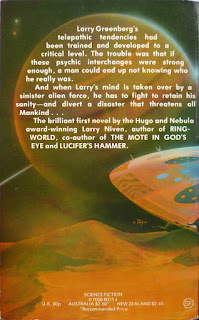 Along the way I've been collecting vintage paperback editions of the books – in bookshops, at book fairs and online – often, hopeless case that I am, in multiple editions and printings, a few of them signed. World of Ptavvs was one of the first I picked up (in London's Skoob Books, part of a huge science fiction paperback haul), before I even had a sense of what Known Space was and how Niven's debut fitted into it; which is perhaps why I found it a little scrappy, in spite of its exuberance and its appealing (to me) central conceit of an ancient, incredibly powerful telepathic alien – a member of a long-extinct Slaver species which a billion and a half years ago subjugated the galaxy – making a monstrous return in the vicinity of 22nd century Earth, with disastrous consequences. 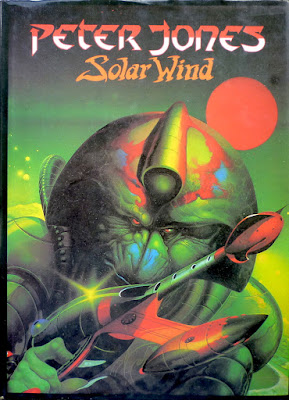 I bought it in its 1978 Futura paperback edition (little realising that that wasn't the first UK paperback edition; that would be the 1971 Sphere edition, predated by the 1968 Macdonald hardback), with cover art by Peter (Andrew) Jones, who, I learned not long after, when I came across a copy of his SF art book Solar Wind (Dragon's Dream, 1980) in a Brighton flea market, painted quite a lot of Larry Niven British paperback covers in the 1970s and '80s, and those of numerous other SF authors besides. Indeed, a reworked version of Jones's painting for the 1979 fourth Orbit/Futura printing of Protector adorns the cover of Solar Wind, depicting Phssthpok, the alien Pak who travels to the Sol system in search of his (far) distant relatives and winds up altering the destiny of an entire planet. 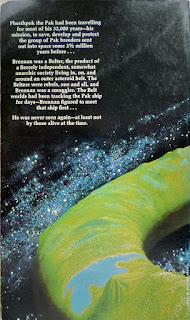 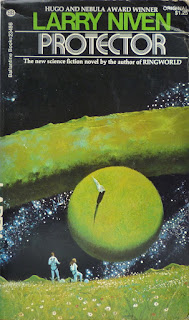 Like others of Niven's novels, Protector is a fix-up, made up of a few different short stories. For me, "Vandervecken", the second half of the book, is the best bit, following unassuming shoe salesman Elroy Truesdale as he tries to get to the bottom of why he was mysteriously abducted and deprived of four months of his life – an investigation that takes him and Belter – i.e. resident of the asteroid belt – Alice Jordan to Kobold, a bizarre, ring doughnut-shaped artificial world with a neutronium sphere at its centre. Thereafter, the narrative escalates into a thrilling interstellar battle – one which I reckon must have been an influence on noted Known Space enthusiast Alastair Reynolds (among many other authors, I'm sure), in particular the extended chase sequence in Redemption Ark – before wrong-footing the reader and coming on like a (micro)cosmic precursor of Justin Cronin's The Passage, as, with horrifyingly inexorable logic, the fate of three million colonists on the planet Home is sealed. 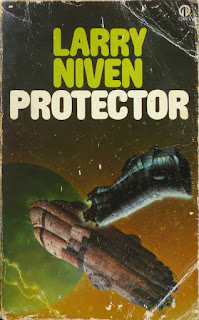 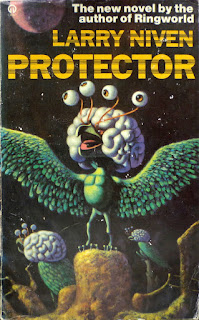 Dean Ellis's cover for the 1973 US Ballantine first edition of Protector (a second printing of which, published in November 1973, two months on from the first printing, I picked up online) does a pretty decent job of depicting Kobold (Ellis also painted the Ballantine first edition cover of Ringworld), whereas Tony Roberts' cover art for the 1974 first and 1976 third printings of the UK Futura/Orbit edition could be any spaceships anywhere in the galaxy. As for the 1975 Futura second printing, that reuses the (uncredited) cover art from the 1973 Ace edition of Best Science Fiction Stories of the Year, and bears no relation to the story whatsoever (although I do rather like it). (The same art was also used for the 1976 Compton Russell edition of Protector, the novel's first and only hardback edition, and one of the scarcest and priciest books in Niven's backlist; copies are usually listed at upwards of £2,000, comparable with the 1972 Gollancz first of Ringworld.) 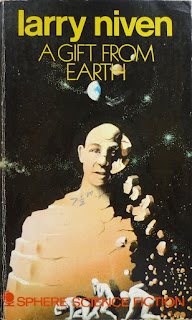 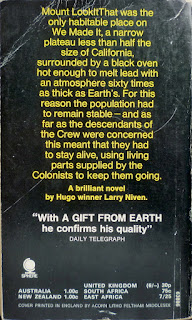 Michael McInnerney's evocative cover art for the 1971 Sphere edition (and the 1971 Ballantine edition, second printing) of A Gift from Earth – which I acquired a signed copy of – at least alludes to the story within, even if the back cover copy goes somewhat off piste: the colonised plateau on Mount Lookitihat, where the story is set, is called Plateau; We Made It is an entirely separate planet altogether, although I can see how a harried editor skimming the novel's confusing first few paragraphs might have got the wrong end of the stick. In fact the ecology of the 40-mile high Mount Lookithat – so named because the pilot of the first colony ship to reach the place exclaimed "Lookitthat!" when he saw it – is the most interesting thing about the novel, the plot of which concerns a revolution against the ruling class's authoritarian use of organ transplanting to extend their lives (a recurrent theme in Known Space stories). Half the size of California and consisting of a handful of strata, Plateau is the only habitable part of the planet it towers over, the rest of which is a mist-shrouded "eternal searing black calm, useless for any purpose". 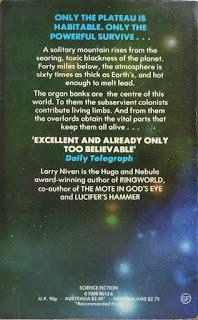 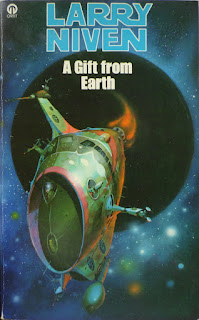 The back cover copy of the 1978 Orbit/Futura edition provides a more accurate description of the novel, and adorns another Peter Jones painting, one that I would guess depicts the ramscoop robot from Earth that upsets the precarious societal balance on Plateau. I like Jones's Niven covers a lot; of all the artists that have lent their talents to the author's book covers – and there are some really good ones, as this post demonstrates to a degree – Jones's style and approach seem to me the most in tune with Niven's peculiar mix of hard science and pulpy abandon; see also his covers for, among others, the 1979 Orbit second printing of A World Out of Time, and the 1978 Orbit/Futura edition of Neutron Star. 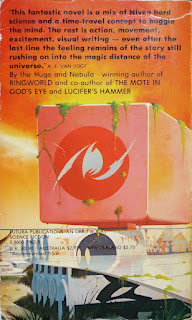 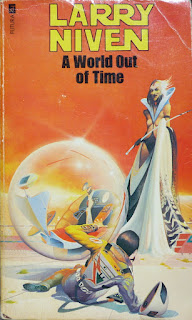 Speaking of Neutron Star, I plan on writing something about that collection, and Ringworld, soon. 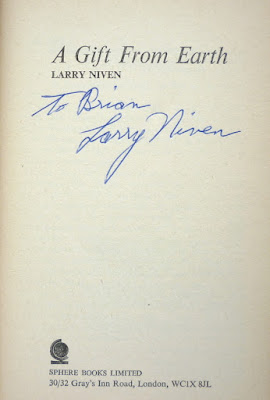