The James Bond Triad Panther Granada Box Set: From Russia, with Love, Goldfinger, You Only Live Twice, Live and Let Die, The Man with the Golden Gun and Octopussy

Let's take a breather from the 2010 Review of the Year in Books and Comics – fret not; there's plenty more to come yet – to catch up on a recent acquisition or two. And today I've got something rather fab which also acts as a coda to that post on the 1970s Triad/Panther/Granada paperback editions of Ian Fleming's James Bond novels. You remember those: the ones with the terribly glamorous – or perhaps glamorously terrible – Beverley le Barrow covers. Well feast your eyes upon this obscure object of desire: 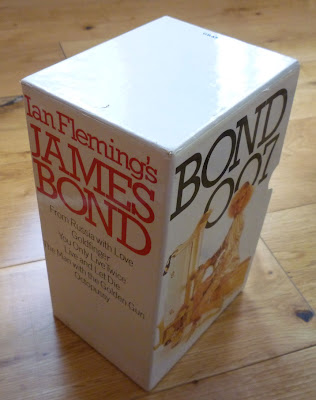 This magnificent box contains six Panther paperback Bond novels: From Russia, with Love, Goldfinger, You Only Live Twice, Live and Let Die, The Man with the Golden Gun and Octopussy. It was published, I'm guessing by the dates in the books – which are all either 1978 first prints or 1979 reprints – in 1979. That's at odds with the information on Amazon, though, which reckons the box set was published in 1978. However, the box design on Amazon is different too: the Amazon box has the Beverley le Barrow photo from You Only Live Twice on its front (or possibly its back; depends on your perspective really), along with the titles of the books: 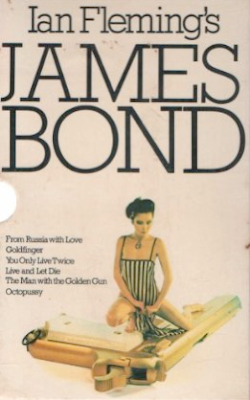 While mine has the photo from The Man with the Golden Gun cover on the front (and the one from Goldfinger on the back), and no mention of the books, although they are the same six novels listed as being inside the Amazon version: 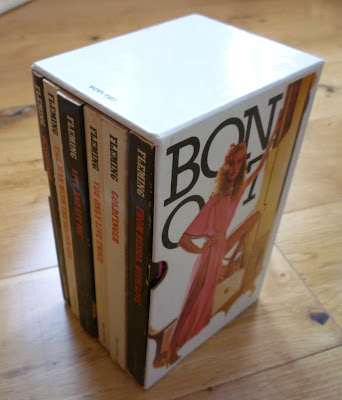 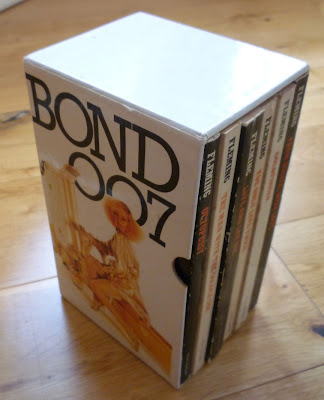 Curious. Presumably there was more than one version of the box. And it's an odd selection of books inside, too; why no Casino Royale, or Dr. No? Mind you, I think the Panther editions were published out of sequence anyway, so perhaps the books in the box were the initial six that Panther issued.

I went into the creative process behind those glorious Beverley le Barrow photos in the previous Bond/Panther post, but I can add a tiny detail about the Goldfinger cover (duplicated on the box itself): the gold goblet the model is holding and the champagne bucket at her feet were supplied by luxury goods emporium Aspreys of Bond Street, London. So, what with the Terry de Havilland shoes and Hooper Bolton jewellery, this was one classy photo shoot. 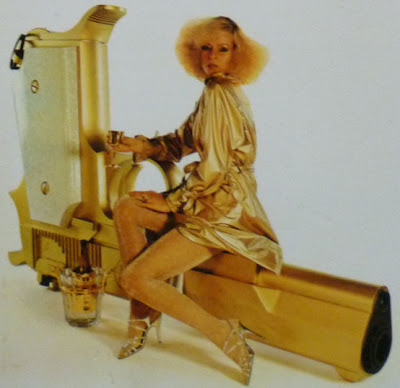 I have no idea how sought-after or collectable this box set is, or how much it's worth. There aren't any for sale on Amazon or AbeBooks; I got this one for £4.50 from a seller on eBay who had simply called it "bond box set" or something, which wouldn't make it easy to find for any 007 collector (I just happened to stumble upon it). But it's a fun thing to own, nevertheless.