It surely can't have escaped the attention of regular readers (usual caveats about veracity of purported regularity – and indeed of readership full stop – apply) that I've been banging on about Donald McCormick's Who's Who in Spy Fiction – and latterly Spy Fiction: A Connoisseur's Guide – for a while now. That's because they have, as I suspected they would, proved useful references for a fair few posts. But they're also starting to provide inspiration for book purchases too. Such is the case with this latest eBay buy: 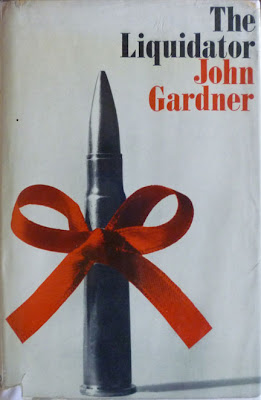 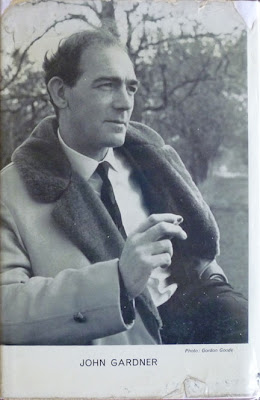 A UK hardback first edition of John Gardner's debut novel, The Liquidator, published by Frederick Muller in 1964. I've been aware of Gardner for a long time, but I've never got round to reading anything by him. But his entry in Who's Who in Spy Fiction intrigued me enough to track down a copy of The Liquidator, the first in a series of eight novels starring cowardly, bungling secret agent Boysie Oakes (it was turned into a film in 1965, directed by Jack Cardiff, of slightly later Girl on a Motorcycle fame).

"The idea came to me in a train," Gardner told McCormick in Who's Who. "Boysie Oakes was based on the idea of a government employing people to murder. The book was written as a joke, but behind it were some of the things I had always wanted to say about this kind of life." In Spy Fiction: A Connoisseur's Guide, Gardner added that The Liquidator "was written as a kind of placebo against the excesses of those who tried to hang onto the coat tails of Ian Fleming. Oakes, a cowardly, inept and lecherous idiot is recruited to intelligence by mistake, and appointed hired killer – a job he is forced to sub-contract, sometimes with disastrous results."

But it wasn't just the Fleming hangers-on who Gardner objected to: Boysie Oakes was intended as an antidote to James Bond himself. In Who's Who in Spy Fiction – published, it's worth noting, in 1977 – McCormick states that, like John le Carre, Gardner "despised" the character of 007. But in a surprising turn of events, just two years after Who's Who appeared, Gardner signed a contract with Ian Fleming's publishing estate Glidrose to write a new, updated series of Bond novels, beginning with License Renewed in 1981. He ended up writing fourteen original Bond novels and two movie novelizations between 1981 and 1996. In Spy Fiction: A Connoisseur's Guide – published in 1990 – Gardner himself notes, "There is some irony in the fact that, later, having moved on from the comedy of B Oakes to serious espionage fiction, I became the one chosen – in 1979 – to continue the work of Ian Fleming, which I combine with more serious novels of espionage."

The dustjacket of this first edition of The Liquidator was designed by Derrick Holmes, whose photo-based cover designs graced a good number of novels published by Muller, Andre Deutsch and Heinemann in the 1960s. The best-known of those – aside from The Liquidator – was Anthony Burgess' Inside Mr. Enderby, for which Holmes designed the jacket of the 1963 Heinemann first edition – originally published under the pseudonym Joseph Kell.

The author photo on the back of The Liquidator's jacket, meanwhile, was taken by Gordon Goode, a Stratford-upon-Avon-based photographer who died in 2008. Aside from freelance commissions, such as this photo of Gardner, Goode was a regular official photographer for the Royal Shakespeare Company, taking hundreds of pictures of actors on and off stage, among them Patrick Stewart, Helen Mirren, Judi Dench and Ian Holm. His widow, Margaret, recently unveiled an archive of the photographs, some of which can be seen in this BBC Coventry slideshow. John Gardner lived just outside Stratford, in Tiddington: from 1958 to 1965 Gardner worked as a drama critic for the Stratford-upon-Avon Herald, and naturally would cover the RSC – hence the connection with Goode; Peter Hall, founder and director of the RSC from 1960–1968, would often give Gardner a lift to work. Small world, Stratford. And according to McCormick in Who's Who in Spy Fiction, Gardner "became such an authority on Shakespeare that he was asked to lecture on the Bard in the United States and Russia".

For more on John Gardner, a pretty thorough website dedicated to him can be found right here.
Posted by Nick Jones (Louis XIV, the Sun King) at 04:27