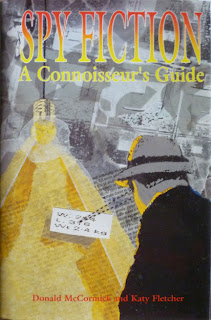 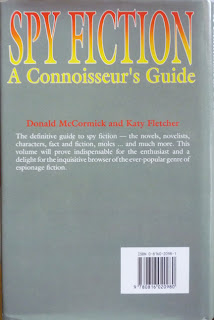 Published in 1990 by Facts on File, it's the hardback first edition of Donald McCormick and Katy Fletcher's Spy Fiction: A Connoisseur's Guide, with a dustjacket designed by Richard Garratt and a front cover illustration by Colin Robson. And if you're a regular (or more likely semi-regular, or even more likely, irregular) reader of Existential Ennui, you might recognise McCormick's name. That's because at the end of last month I blogged about another, somewhat similar survey of the spy fiction field I'd purchased, written by... you guessed it: Donald McCormick. Hence the "surplus to requirements" comment up top.

Ah, but Spy Fiction: A Connoisseur's Guide isn't merely an update of McCormick's earlier Who's Who in Spy Fiction. It's an entirely new, completely different book. For one thing, it's co-authored with an American lecturer on the subject (Fletcher), and consequently has more of an American bias. For another, although the approach is similar to Who's Who – alphabetical entries on espionage fiction authors – here each entry is broken down into a list of titles, a brief biography, and a critical analysis. And although McCormick clearly draws on the research he did for the earlier book, there are authors included in the Connoisseur's Guide who weren't in Who's Who – Ross Thomas, to name but one.

And if this post is beginning to read as if I'm attempting to justify the purchase of a book about spy fiction written (in part) by Donald McCormick when I only recently purchased a very similar book about spy fiction written (in toto) by Donald McCormick (...), let me just point out that there are also eight essays at the back of the Connoisseur's Guide which aren't in Who's Who, ranging from a history of American spy fiction to movie adaptations of spy novels. So, y'know. There's that.

But the major difference between Spy Fiction: A Connoisseur's Guide and Who's Who in Spy Fiction is the former is only twenty years out of date instead of thirty-three (Who's Who was published in 1977). So it might prove slightly more useful when blogging about slightly more recent spy novels. Although obviously still not for any novels published after 1990. Hmm. I wonder if Donald McCormick has written any more up-to-date spy fiction surveys...?
Posted by Nick Jones (Louis XIV, the Sun King) at 04:44