Here's a book I picked up for a song online, the first in a short series of pseudonymous novels by Ross Thomas: 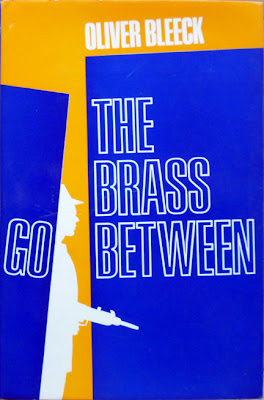 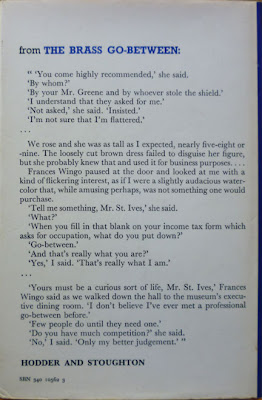 It's the UK first edition hardback of The Brass Go-Between, written by Thomas under the pen name Oliver Bleeck, and published by Hodder & Stoughton in 1970 (originally published in the States by William Morrow in 1969). The striking dustjacket is by Kaye Bellman, who also designed covers for J. J. Marric (a.k.a. John Creasey; Gideon's Fog, Hodder, 1975) and Nicholas Mosley (Impossible Object, Hodder, 1968). The back flap of the jacket tells us that "Oliver Bleeck is a pseudonym of an established and award-winning American suspense novelist. The Brass Go-Between is the first of several novels that will be published under the pseudonym Oliver Bleeck."

Thomas in fact wrote five books as Bleeck: The Brass Go-Between, The Procane Chronicle (1971), Protocol for a Kidnapping (also 1971), The Highbinders (1974), and No Questions Asked (1976). All of them are (I think) first person affairs starring Philip St. Ives, an urbane, jet-setting go-between who mediates between the owners of stolen goods and the thieves responsible for stealing them in the first place. The third book in the series, The Procane Chronicle, was made into a movie – St. Ives (1976), helmed by Guns of Navarone and Cape Fear director J. Lee Thompson and starring Charles Bronson as the eponymous character (actually Raymond St. Ives in the film). As for The Brass Go-Between's plot, it centres on efforts to recover a tenth century brass shield stolen from a Washington, D.C. museum. There's a review of it over at the ever-handy Mystery File blog. (UPDATE: and indeed a review on Existential Ennui itself now.)

I mentioned in yesterday's post on Donald McCormick and Katy Fletcher's Spy Fiction: A Connoisseur's Guide that, unlike McCormick's previous spy fiction survey, 1977's Who's Who in Spy Fiction, the Connoissuer's Guide does have an entry on Ross Thomas. Information-wise there's nothing in it that isn't available elsewhere, but there is a lengthy quote from Thomas on espionage fiction that's worth republishing in full, I think:

"Spy fiction offers adventure, romance, intrigue and suspense, which are the essentials of most fiction. I write it because I enjoy reading it. I also write novels about crime, politics and scallawags, which also provide adventure, romance, intrigue, suspense and even mystery. Most spy novels provide neither an accurate nor realistic picture of the intelligence world because they are not written by espionage agents. This does not necessarily mean that they are not good novels. I have never wittingly had any formal association with any intelligence agency. But I have known some agents. Knowing them did not hinder my career as a novelist. Nor did it help any."
Posted by Nick Jones (Louis XIV, the Sun King) at 05:34