After an announcement about the exclusive interview with Darwyn Cooke over on The Violent World of Parker – conducted by VWoP supremo Trent and myself to mark the publication of Cooke's latest graphic novel adaptation of a Richard Stark novel, The Score – it's back to the books which begat perhaps more famous films. And as with Alistair MacLean's Where Eagles Dare, Elmore Leonard's Mr. Majestyk and James Dickey's Deliverance, this next novel was actually adapted for the screen by its author. Unlike Messrs MacLean, Leonard and, to an extent, Dickey (he's as celebrated for his poetry as much as for his prose), however, the author in question this time is probably better known as a screenwriter... 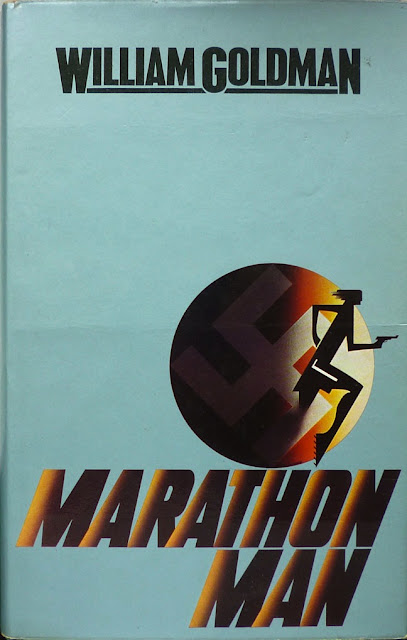 First published by Macmillan in the UK in 1975 – the year after the Delacorte edition – under a dust jacket designed by Stan Fernandes, Marathon Man was William Goldman's ninth novel. Even by the mid-1970s, though, Goldman was already arguably achieving greater fame and attracting more acclaim and plaudits for his screenplays than for his prose; his adaptation of Ross Macdonald's The Moving Target – Harper, 1966 – had amply demonstrated his way with snappy dialogue, while his original screenplay for Butch Cassidy and the Sundance Kid (1969) had netted him an Academy Award. And two years after initial publication, Marathon Man would itself be turned into a film, again scripted by Goldman. 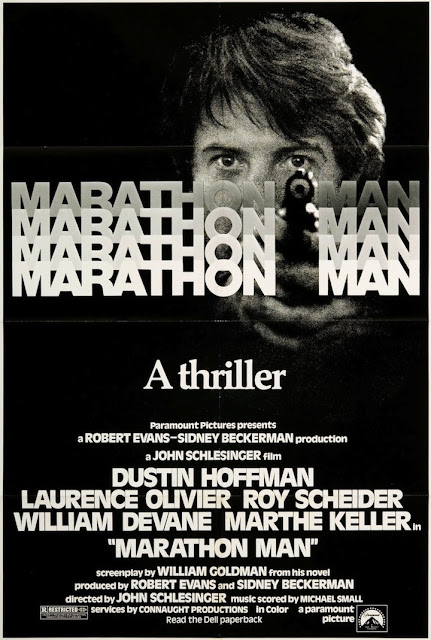 Now, I must admit that before picking up this first edition of Marathon Man – which I spotted in the window of a Lewes antiques shop – I didn't realise there was an original novel, let alone that it had been written by Goldman; I always figured Marathon Man had been written for the screen. So it was a pleasant surprise to find there was a book, and an even more pleasant surprise to discover that the novel is even better than the movie. 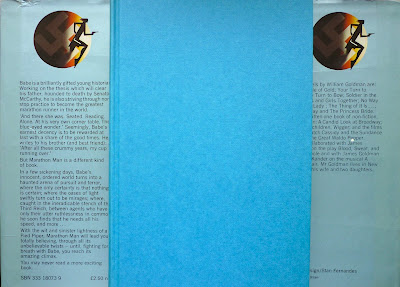 In terms of plot, the two are almost identical: Thomas Babington Levy – "Babe" to his brother Henry, whom he calls "Doc" – a student and aspiring marathon runner hoping to write a thesis that will clear his father's McCarthy-muddied name, falls for a beautiful fellow student who, astonishingly (to Babe), falls for him too ("It was his fate, he knew," Goldman narrates in the novel, "to fall in love with Venuses and marry a plugger with a face like a foot"). Meanwhile, in Europe, an American assassin named Scylla finds he himself has become a target for assassination. These two strands intertwine when Doc turns up at Babe's apartment having been stabbed, dying in Babe's arms, after which Babe is abducted and tortured by a Nazi dentist named Christian Szell – a (fictional) former associate of Josef Mengele – who inflicts excruciating levels of pain by drilling into Babe's teeth whilst repeating a question: "Is it safe?"

If all that comes across as a little confusing, that's because I've left my synopsis intentionally oblique in case you've never seen the movie of Marathon Man – unlikely as that may be. Directed by John Schelsinger and starring Dustin Hoffman as Babe, Roy Scheider as Doc and Laurence Olivier as Szell, the film has become infamous for that aforementioned torture scene, but there's much to recommend it besides – the three leads' performances for one, and of course Goldman's sparkling script. But pretty much everything that's great about Goldman's screenplay has its basis in the book, which additionally benefits from its breathless style of prose: dialogue and description tumble across the page in a frantic fashion, as if the story flew from Goldman's fingertips and it was all he could do to rush to get it down on paper.

Moreover, because it's a novel and not a movie, Goldman is able to withhold the identity of Scylla until halfway through the book; obviously having already seen the movie adaptation, I knew who Scylla was, but even given that, I was able to appreciate the level of suspense Goldman maintains. And the ending is different too: Goldman has expressed his frustration at being made to tone down the finale – reputedly at Hoffman's insistence – and has also lamented the loss of a much earlier, violent scene from the novel which grants added insight into Scylla's psyche (although I must admit that Wikipedia's suggestion that a murdered character was Scylla's lover rather flew over my head). 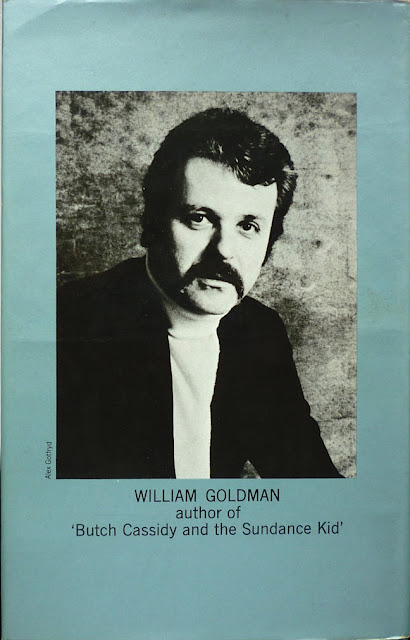 Interestingly, Goldman wrote a belated sequel to Marathon Man – Brothers (1987), which apparently somehow resurrects the deceased Scylla, and which, if this note is anything to go by, sounds completely bonkers. Having enjoyed Marathon Man so much, though, I'm kind of minded to give it a go, and maybe one or two others of Goldman's novels as well.

Moving on, and we're staying with the villainous Nazis for our penultimate book-and-movie, in which, having only been mentioned in passing in Marathon Man, Josef Mengele takes on a starring role. But more than that, the film adaptation once again stars Laurence Olivier, this time playing an aging Nazi-hunter rather than an aging Nazi...
Posted by Nick Jones (Louis XIV, the Sun King) at 08:45