2010: A Review of the Year in Books and Comics; 3. How I Didn't Really Understand Grant Morrison's Batman Comics But Still Thought They Were the Best Comics of the Year 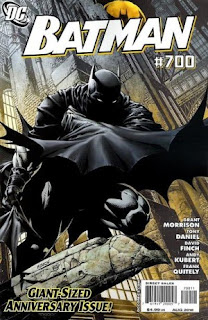 And so we continue the 2010 Existential Ennui Navel-Gazing Review of the Year, except that this segment will have rather more relevance to 2010 than parts one and two did. Because alongside all the second hand books I was reading throughout 2010, I was also reading a fair number of new comics. And I don't just mean the graphic novels nestling in amongst the foxed and musty first editions in yesterday's Bloody Great List (in which I forgot to include one – Jason's rather good Werewolves of Montpellier, now added), among them Chris Ware's Lint and Darwyn Cooke's The Outfit. I mean yer proper pamphlet-like comic books, like wot they used to 'ave in the olden days, guv. Astonishing to think that actual, real comic books are still being published in this whizz bang digital delivery age, but they are, and it's a beautiful thing.

Unfortunately, while the floppy format of comic books was still a thing of wonder in 2010 (to me, anyway), the content left a lot to be desired, something that was reflected in declining sales of monthly American comic books. Increases in price played a part, but the bald truth is that the material was for the most part subpar. The big Marvel event kicking off 2010, Siege, was a damp squib, and the relaunched Avengers titles spinning out of it have been disappointing, only the main Brian Michael Bendis/John Romita Jr. Avengers showing a spark of life. Ed Brubaker's previously reliable Captain America lost the spring in its step, Matt Fraction's Iron Man went through the mechanical motions, and his Thor was noticeably under the weather. DC Comics became obsessed with the inherently dumb Green Lantern mythos, with the Blackest Night/Rainbow Lanterns farrago culminating in the fortnightly snoozefest known as Brightest Day. Meanwhile both Superman and Wonder Woman got J. Michael Straczynski-shaped relaunches, neither of which managed to hold anybody's attention.

There was some good stuff around. Ex Machina reached a satisfying if dark conclusion; The Walking Dead kept on keepin' on, enjoying a TV show-inspired sales boost; Rucka and Southworth's Stumptown was that rarest of things, a good crime comic; Mike Carey and Peter Gross' The Unwritten was worth sticking with; Paul Cornell's Action Comics got off to a promising start, though more recently it's faltered slightly; and although I lost track of it a year or two back, by all accounts John Arcudi and Guy Davis' B.P.R.D. continues to be a damn fine series. But despite these glimmers of hope, the number of comics series I'd stopped reading only increased as the year ran its course.

There was, however, one series of comic books – or rather, a series, a miniseries, a one-shot, a couple of issues of another series, and eventually a brand new ongoing series – which bucked the downward trend, but which, perversely, but not entirely coincidentally, were also the most confusing and perplexing comics of the year. The Batman comics written by Grant Morrison in 2010 – Batman and Robin, a few issues of the main Batman title, the Return of Bruce Wayne miniseries, the Batman: The Return special, and latterly Batman Incorporated; an appropriately convoluted publishing strategy – were, for me, the year's most consistently enjoyable mainstream comics. That I had next to no idea what the hell was going on in them most of the time didn't really matter. In fact, it only added to their allure.

The overarching storyline that had been running across Morrison's Batcomics since he started writing them four years ago reached a climax with Batman: The Return of Bruce Wayne #6 and Batman and Robin #16, but I was still none the bloody wiser. I wasn't sure who Dr. Hurt really was, or how Bruce actually ended up in the past, or how he managed to find his way back again, or what those weird symbols were all about, or who the guy in the cave was, or how all of those things connected up, as I'm sure they do, at least in the minds of Morrison himself and those annoying smartarse comics fans on the internet who pedantically spell things out for us knuckledragging imbeciles as if it's all the easiest thing in the world to understand. You know the ones: those tiresome hairy boys who congregate on the fringes of Valiant Trooper drink-ups and haunt certain messageboards.

Anyway, as confounding as Morrison's Batman comics were, they were also never less than enthralling, stuffed with so many memorable moments and compelling characters that other superhero comics appeared positively pedestrian by comparison. Batman being shot in the head. The Joker disguising himself as a British masked detective. A confrontation with the Justice League of America at the end of time. Damian, the snottiest, most brilliant Robin ever. Gonzo villains aplenty. That every issue seemed to have a different artist – some good, some not so – only added to the unexpected nature of the enterprise. There was no telling what was coming next.

And that's exactly what American comic books lacked in 2010 – have lacked for a good many years: the notion that anything is possible. Where the majority of Marvel and DC's output was so overplanned it felt like you'd already read a comic before you'd even opened it, Morrison's Batstuff, even though it was no doubt meticulously charted, felt freewheeling. The difference being, Morrison's work is the work of one man's fevered mind, not the work of a committee, of an editorial conference or a writers' retreat. There are lessons to be learned in Morrison's Batman comics, but I doubt they will be. And frankly, I don't really care either. So long as Grant Morrison keeps writing Batman comics for a while yet – and with the launch of Batman Incorporated last month, it looks like he will – I'll be happy.

I've gone back over the MorriBatBooks (© 2010 Existential Ennui) a couple of times already trying to make sense of them, to little avail. I expect I'll have another go soon. But that they continue to bemuse and bewilder is both beside the point and also precisely the point: they're pretty much the only comics I have returned to and re-read this year, or last year, or the year before that. All the other comics I buy get boxed away and basically forgotten. Not these ones, though; not these beautiful, barmy Batbooks, these crazy caped crusades, these dizzy, deranged Dark Knight delights. I reckon I'll be digging these daft buggers out of the longbox for a long time to come.

Go here for the 2010 Review of the Year in Books and Comics, Part 1