For our next Lewes Book Bargain, we wander off the beaten track somewhat: 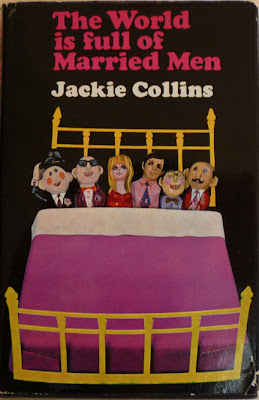 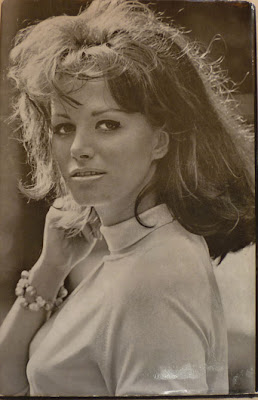 That, my friends, is a UK hardback first edition of Jackie Collins' The World is Full of Married Men, published by W.H. Allen in 1968. Y'see, this is the beauty of British charity shops, particularly those in relatively well-to-do towns like Lewes: you never quite know what they're going to turn up. I found this in the Lewes branch of Oxfam, along with the next Lewes Book Bargain I'll be blogging about this weekend (unless I run out of time, in which case it'll be Monday). And though Jackie Collins isn't really a writer I'd ordinarily be terribly interested in, a first edition of her debut novel – which is what this is – for £2.99 was, frankly, irresistible, not least because of that brilliant photo of Jackie on the back cover (by the showbiz photographer Ben Jones) looking all '60s glam.

Jackie Collins did, of course, go on to write a string of massive-selling books (over 400 million copies sold according to some sources), with novels like The World is Full of Married Men, The Stud (1969) and The Bitch (1979) laying the groundwork for what would become the 1980s bonkbuster genre. The sexual content of Married Men was considered pretty shocking at the time; Barbara Cartland called it "a nasty book, filthy and disgusting," adding, "I hardly slept after reading it." (I just bet you didn't, you saucy mare.) My own encounters with Collins' work have been through the late '70s movie adaptations of The Bitch and The Stud, both starring her sister, Joan, and both of which held an illicit allure whenever they were shown on telly in the early '80s, a period that, oddly enough, coincided with my coming of age... so to speak.

The overall dustjacket design on The World is Full of Married Men is credited to Tony and Jenny Williams; I think Jenny was responsible for the illustration on the front – I believe she's better known for her illos for children's books like A Lion in the Meadow and The Silver Wood, which would fit with that naive style. As for the value of the book, I've got no idea how bouyant the market is for Jackie Collins firsts. There are copies of this first edition on AbeBooks ranging from £12 up to £50. This copy does have a curious inscription in it, however: 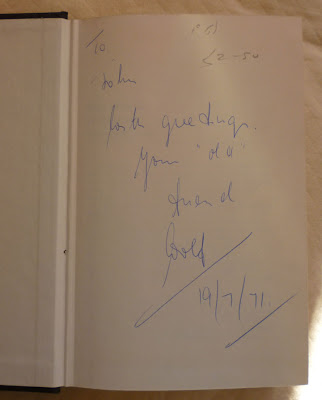 UPDATE, 18/2/11: After a rather impressive – not to mention unhealthily obsessive – extended period of deliberation, mycharityshop has determined that the inscription reads as follows: "To John, With greetings, your 'old' friend Wilf/Wolf". I'm plumping for "Wolf" myself, but dissenters should feel free to comment.
Posted by Nick Jones (Louis XIV, the Sun King) at 04:10