For our second Dennis Lehane-focused post in Lehane/Pelecanos Week, we have this: 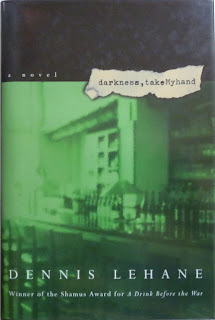 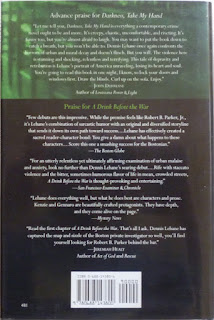 A US hardback first edition/first impression of Darkness, Take My Hand, published by William Morrow & Company in 1996. And like that copy of A Drink Before the War from yesterday... 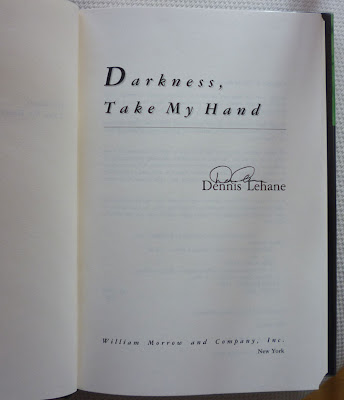 Once again, this is a signed American first edition. Unsurprisingly perhaps, I got it from the same UK-based seller as A Drink Before the War, again at a thoroughly decent price; there's an unsigned true first on Amazon UK for sixty quid, but that's it for UK dealers for this edition, so, as before, to get hold of a copy it'd normally be a question of buying a copy from a US dealer, which, in fine, pristine condition – which this copy is –  and signed (not inscribed) would mean somewhere between forty and a hundred quid, plus shipping.

Darkness, Take My Hand is Dennis Lehane's second novel, and the second to feature Boston P.I.s Patrick Kenzie and Angie Gennaro. Like its predecessor it's written in the first person from Patrick's perspective – as are all the Kenzie-Gennaro books – and this time pits the investigating team against a serial killer. From the little I've read thus far, I don't think it's going to end well for anyone, and might even be darker than the previous book (the novel's title may be something of a giveaway there...), which would be some feat. Still, I may only be a few pages in so far, but it's already got its hooks into me.

The book's interior was designed by Susan Hood (is it an American thing to credit the designer of the interior on the copyright page? British novel publishers generally don't bother, the miserable buggers), but the dustjacket was designed by Bradford Foltz, who we've encountered before here on Existential Ennui: he was responsible for the jacket of the US hardback edition of Donald Westlake's Dortmunder novel Watch Your Back! His designs are very typical of the current image library/classy font school of cover design, but even so, there are still some nice pieces in his portfolio; I like the Lawrence Block cover on this page in particular, and there are a few others that are also quite striking.
Posted by Nick Jones (Louis XIV, the Sun King) at 09:30