Right then. Time to try and clear the decks a bit, because next week Existential Ennui will be dedicated to two authors; one of them because his new novel is published next week, and the other because... well, he's got links to the first one and I've got a couple of recently bought books of his to blog about, and that's reason enough round these here parts. Yes, looming large in your future it's Dennis Lehane and George Pelecanos Week, as Tuesday sees the arrival of Lehane's latest book, Moonlight Mile – at least, in the States, anyway; here in the UK it's not published till bloody February – and also I've got a stack of rather special recent Lehane acquisitions burning a hole in, er, the shelf, or whatever the literary equivalent of burning a hole in one's pocket is, and they're directly related to Moonlight Mile; plus I've got those Pelecanos ones I mentioned. So next week it's ahoy Lehane! And, er, put 'er there, Pelecanos! And beyond that, there's more to come on Donald Westlake (as ever), Ross Thomas (some crackers there), and some more small press comics stuff too.

But first, I've got a clutch of recent Lewes Book Bargains to catch up on, all bagged in various Lewes charity shops, mostly dating from the 1970s (the books, not the shops, although the interiors of the shops might suggest otherwise...), and including a couple of real doozies. Not sure this one qualifies as one of those, however: 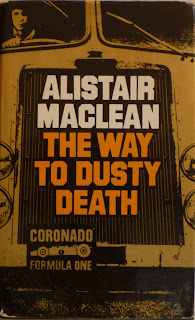 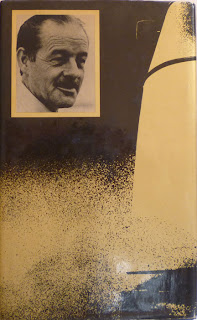 A UK hardback first edition of The Way to Dusty Death by Alistair MacLean, published by Collins in 1973. Now, I'm not necessarily saying it's rubbish – I haven't, after all, even read it yet – but I was thoroughly amused by this string of posts on a motoring message board, which I stumbled across when researching the book. It's always fascinating to read the thoughts of specialist nerds when a writer or filmmaker or whoever dares to venture into their particular area of expertise; I've been guilty of this kind of picky response myself, I'm sure, but hopefully I've never got quite so irate as some of these silly sods. Opinions on MacLean's novel from message board regulars range from exasperation that the author made the apparently fundamental error of believing that "GP cars were fitted both with speedometers and headlights" (er...) to an artistic appraisal of the book as being "TOTAL KRAPPP!!!!" A nice, balanced assessment there.

And actually that's fairly representative of message boards in general. Almost invariably they're forums for backbiting and bitching and nastiness, and when they're not they're either so over-moderated that any potentially constructive criticism is effectively neutered, or so bland and nice it's like wandering into a Hare Krishna AGM. But anyway, The Way to Dusty Death may not be one of MacLean's better-liked books – even one of the main fan sites only scores it six out of ten – but I think we can hazard it's a bit better than the exhaust fume-addled folk on that message board maintain. It's about skullduggery in the world of Grand Prix motor racing, which, being a sometime fan of Formula One, doesn't sound too bad to me.

There's no credit on the dustjacket for the design or image, but there is a signature on the back flap: John Constable. Which, I'm sure you can imagine, makes researching it pretty much impossible. But no matter; with my ongoing interest in British thriller writers, Alistair MacLean is an author I've been wanting to check out for a while (I have an abiding love of Where Eagles Dare, the film he wrote the screenplay for and the novel of simultaneously), and a Formula One-focused thriller seems as good a place as any to do just that.
Posted by Nick Jones (Louis XIV, the Sun King) at 05:24