Next up in Lehane/Pelecanos Week, we got this: 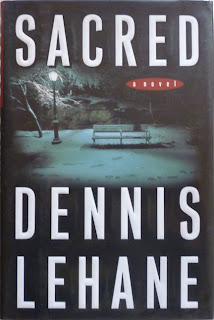 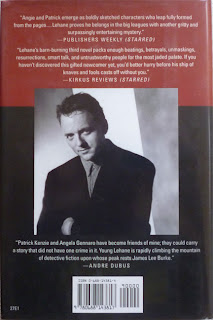 A US hardback first edition/first impression of Dennis Lehane's Sacred, published by William Morrow in 1997. And if you've been following all week, and have therefore seen the posts on A Drink Before the War and Darkness, Take My Hand, then the fact that I'm now blogging about the third book in Lehane's series starring Boston P.I.s Patrick Kenzie and Angela Gennaro – not to mention Lehane's third novel – shouldn't really come as too much of a surprise. Also, if you continue to use your frankly astounding powers of deduction, you might be able to guess where the next couple of posts are heading too... But anyway. This copy of Sacred came from the same seller as the previous two Lehane novels; it's not signed, but it's still a fine true first, and therefore will do me just, er, fine. The story this time concerns a dying billionaire's missing daughter, who Kenzie and Gennaro are hired to find, a job which takes them away from the mean streets of Boston to Florida.

The book was designed by Debbie Glasserman, while the dustjacket was designed, once again, by Bradford Foltz, who we covered for Darkness, Take My Hand. Possibly of more interest this time out then are the photographers responsible for the front and back cover pics. Jose Azel took that moody front cover photo; there are some similarly striking – not to mention similarly wintry – pictures on his website. As for that photo of Mr. Lehane himself, that's by Sigrid Estrada, who's taken many a writer and artist's picture, including Lawrence Block and Paul Auster.
Posted by Nick Jones (Louis XIV, the Sun King) at 13:56