The Kenzie and Gennaro Novels: Prayers for Rain (First Edition)

It's the final post in Lehane/Pelecanos Week (cue ecstatic cheering from single remaining reader – no slight intended on messers Lehane and Pelecanos, you understand; rather my vacuous posts about them), which grinds to a halt a whole day early (or even three days if you count Saturday and Sunday). And to round things off, we have this: 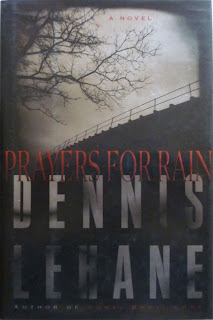 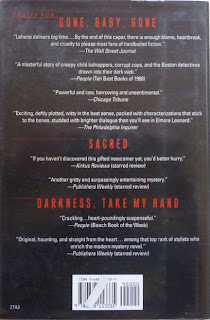 The US hardback first edition/first impression of Prayers for Rain, published by William Morrow in 1999. It is, you'll be astonished to learn, Dennis Lehane's fifth novel, and also the fifth in his Kenzie-Gennaro series, and it came from the same seller who sold me the previous four books in the series. So basically, I turned a job lot of Lehane first editions I won on eBay – plus a couple of stray George Pelecanos books – into a week's worth (well, almost) of blog posts. I think the lesson there is, it's probably unwise to spend (nearly) a week blogging about a series of novels that you've only read the first one-and-a-quarter of, as you'll quickly run out of interesting things to say about them. Aaaanyway. Too late for regrets; what's done is done; we are where we are, and other irritating platitudes. This time out, Boston private investigators Patrick Kenzie and Angela Gennaro are somewhat estranged following the wrenching events of Gone, Baby, Gone, so it's down to a solo Kenzie to investigate the apparent suicide of a former client.

As with Gone, Baby, Gone, this American edition of Prayers for Rain was designed by Cathryn S. Aison, and the jacket designed by Bradford Foltz. That rather lovely photograph on the front cover is by Judah S. Harris, who, as well as providing stock photos to cover designers, also takes pictures of, as his website puts it, "Jewish life and the human experience"; there are some fantastic examples of his photojournalism here, as well as some ravishing landscape and reportage pictures here.

And that, you'll be pleased to hear, is that for Dennis Lehane for the moment. Next up on Existential Ennui... actually I'm not sure what is next up on Existential Ennui. I've got a bunch of random hardbacks to blog about, including a couple of Westlake Scores; a stack of crime and thriller paperbacks, some of which I picked up at the Paperback and Pulp Fair in London last weekend, including some Richard Stark and Peter Rabe; and a truckload of Ross Thomas first editions, among them a couple of absolutely killer Beverly Lebarrow covers. Oh, and there's another Notes from the Small Press on the way too, not to mention a Parker Progress Report and a Grofield File. In fact, y'know what? Maybe we'll have that last one next...
Posted by Nick Jones (Louis XIV, the Sun King) at 11:35