Let's open the Pelecanos account in Dennis Lehane/George Pelecanos Week with this: 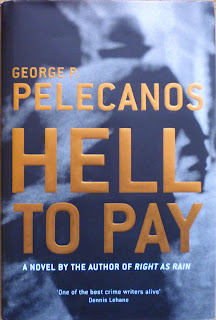 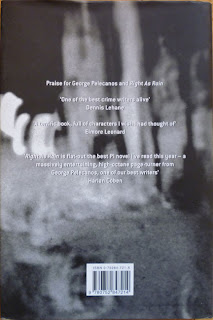 The UK hardback first edition of Hell to Pay, published by Orion in 2002 (published in the States the same year by Little, Brown). I picked this up in the same Essex bookshop I found that Donald Westlake-written soft porn paperback; it's the second in Pelecanos' short series starring private investigators Derek Strange and Terry Quinn, following 2001's Right as Rain. So I guess this is yet another series I'll be collecting, as I can't very well read the second book in a series without having read the first book in the series, and I don't own the first book in the series. But I do, just to compound the matter, own the fourth book in the series, 2004's Hard Revolution, which acts as a kind of historical coda to the preceding three novels, focusing on a younger Derek Strange and his experiences as a rookie cop in Washington, DC circa the assassination of Martin Luther King in 1968, and which I bought for 20p in that church book sale in Lewes back in August. So it stands to reason I'll have to nab copies of Right as Rain and Soul Circus (book #3, 2003) at some point in the not-too-distant future.

And look who provides the endorsement on the front cover of Hell to Pay: why it's Dennis Lehane, who we'll be returning to for the next post in Lehane/Pelecanos Week. What are the odds?
Posted by Nick Jones (Louis XIV, the Sun King) at 04:33