The Kenzie and Gennaro Novels: A Drink Before the War by Dennis Lehane (Signed First Edition)

So then, as I mentioned over the weekend, this week sees the publication of award-winning writer Dennis Lehane's latest novel, Moonlight Mile. It's the sixth of Lehane's books to feature Boston-Irish private investigators Patrick Kenzie and Angela Gennaro, and it's been over ten years since the previous book in the series, 1999's Prayers for Rain. And it just so happens that I've recently come into possession of a number of Dennis Lehane first editions, plus a couple of books by Lehane's crime-writing contemporary and colleague on The Wire, George Pelecanos. So for the rest of this week, Existential Ennui will be largely, if not exclusively, dedicated to messers Lehane and Pelecanos – although necessarily leaning more towards the Lehane side of the ledger, for reasons that will quickly become apparent.

And we begin with this: 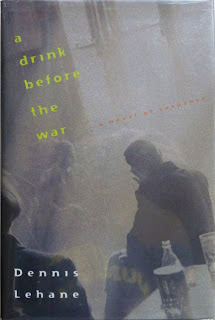 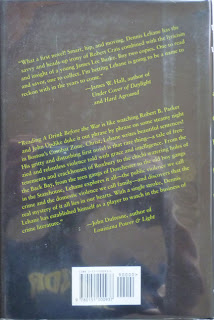 The US first edition of Dennis Lehane's debut novel, A Drink Before the War, published by Harcourt Brace & Company in hardback in 1994; dustjacket – and book – designed by Camilla Filancia and featuring a Robert Capa photograph on the front. Note the 'US' there; ordinarily I tend to collect British first editions, but here I had the opportunity to grab myself an American first edition – and first impression – so I took it, for a couple of reasons. For one, A Drink Before the War wasn't published in hardback in the UK until 2000. Bantam initially picked it up for a UK paperback edition in 1995, but it didn't make it into hardback in the UK until Severn House issued it in 2000. I picked up an ex-library copy of that edition back in July, but, y'know; when there's a six-year gap between the US and the UK edition, there's something about owning a true first that can't be beat.

And the other reason, was this: 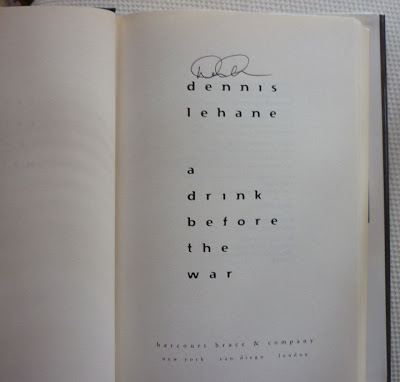 It's a signed copy. And signed US first editions don't come along too often here in the UK, at least not at an affordable price. There's one signed US first of A Drink Before the War listed from a UK seller on AbeBooks for £85, but other than that it'd be a question of tracking one down from a US dealer, which would mean shipping on top. I didn't pay anything like that for this copy, so it's quite a find.

It's also quite a debut. My only exposure to Kenzie and Gennaro prior to reading A Drink Before the War was via Ben Affleck's 2007 movie adaptation of the fourth book in the series, Gone, Baby, Gone. But Casey Affleck's mannered, mumbling portrayal of Patrick Kenzie in that film doesn't really chime with the caustic, sarcastic Kenzie of this first book. And as A Drink Before the War is written in the first person, we get much more of an insight into how Kenzie views the world – which is to say, thoroughly cynically, and through a veil of black humour. We also learn more about his partner – not to mention the object of his unrequited desire – Angie Gennaro. In Affleck's film she's little more than a cipher, but in this first novel she's authentically conflicted: a hard-assed operator when it comes to investigating, and yet also a bit of a punching bag for her abusive husband. Crucially, she also acts as a great counterpoint to Kenzie, so that instead of merely getting an internal monologue from our narrator, we get plenty of sparky two-handers too.

The plot revolves around documents stolen from a Boston politician, which Kenzie and Gennaro are hired to find, but that's just a peg on which to hang a startlingly bleak portrayal of mid-'90s urban America, which in Lehane's hands becomes a hellish vision of poverty, corruption, uncontrolled gangs and escalating violence. This ain't the cosy Boston us Brits are familiar with through Cheers; this is the city as war zone. Reading this novel, it sounds like the worst place to live on Earth. (If there are any Bostonians in the audience, please, enlighten me: is it really that bad?) Nevertheless, Lehane's picture of the city is so vivid and convincing it compels you to keep reading, whether he's describing the neighbourhoods and inhabitants of Boston and how they're divided along racial and economic lines, or simply relating how hard it is to park there. And there are some gripping set pieces to boot, including a shoot-out at a train station – featuring Kenzie and Gennaro's amusingly psychotic 'muscle', Bubba Rogowski – and another in cars and on foot around various slums.
Posted by Nick Jones (Louis XIV, the Sun King) at 09:10