Hayley Campbell's The Art of Neil Gaiman and Eddie Campbell's How to Be an Artist: Signed First Editions (and a Launch Party)

Well it would've been remiss of me, I feel, having spent three or four years editing Hayley Campbell's fine illustrated biography The Art of Neil Gaiman – which publishes in the UK this week from The Ilex Press – not to get Hayley to sign and inscribe a copy to me. Which is precisely what I did at the book's launch party at Gosh! Comics in London on Friday: 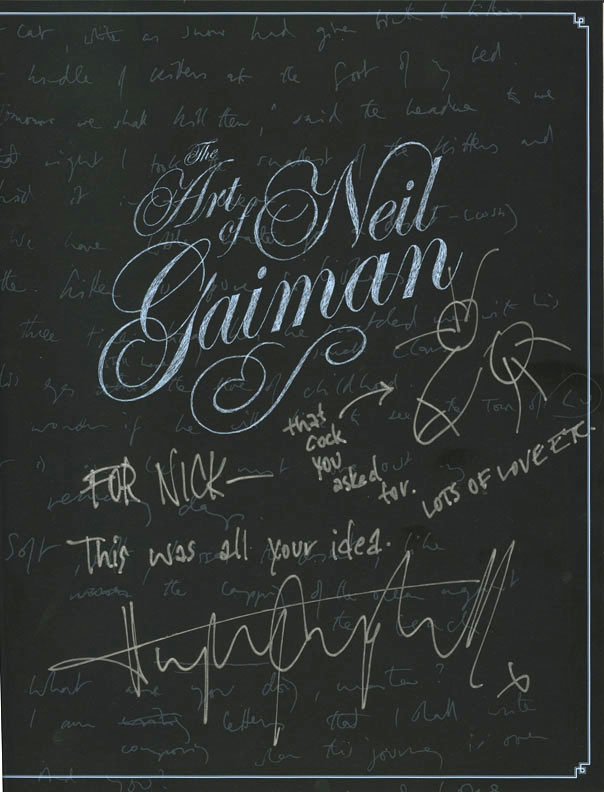 The cock, by the way, was a request – kind of; Hayley had mentioned to me that she'd drawn one in a friend's copy of the book ("Three pubes per ball," she noted. "Classic") so naturally I demanded she do one for me as well. And a fine specimen it is too. 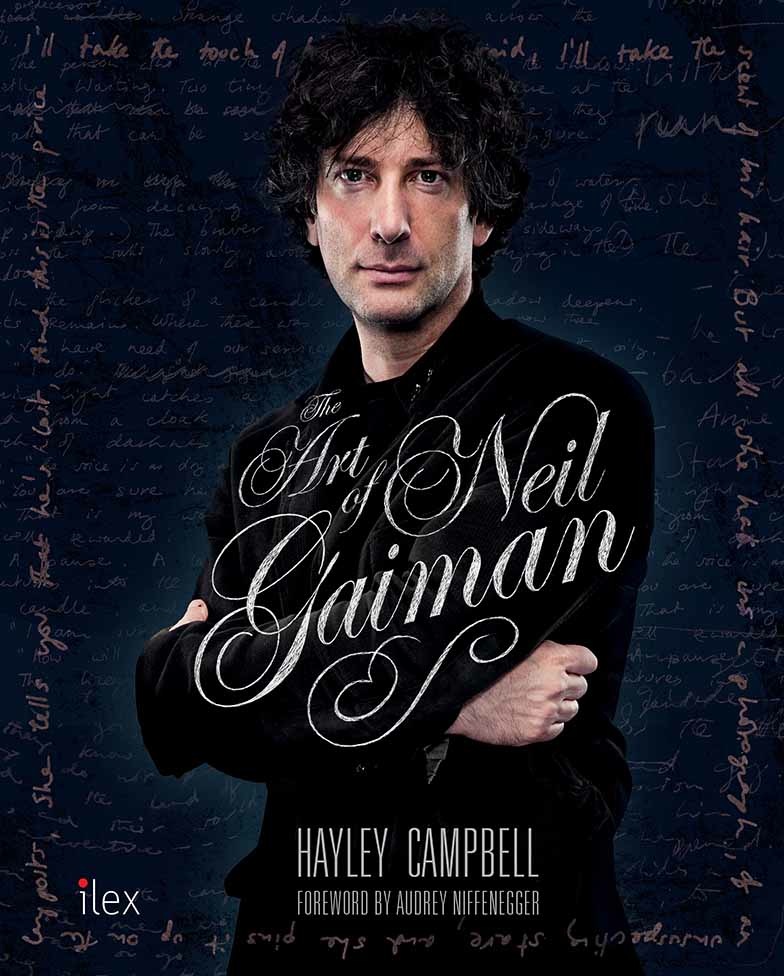 My copy of The Art of Neil Gaiman was just one among many that Hayley signed at the launch; Gosh! photographer Mauricio Molizane de Souza took some pictures of Hayley in action: 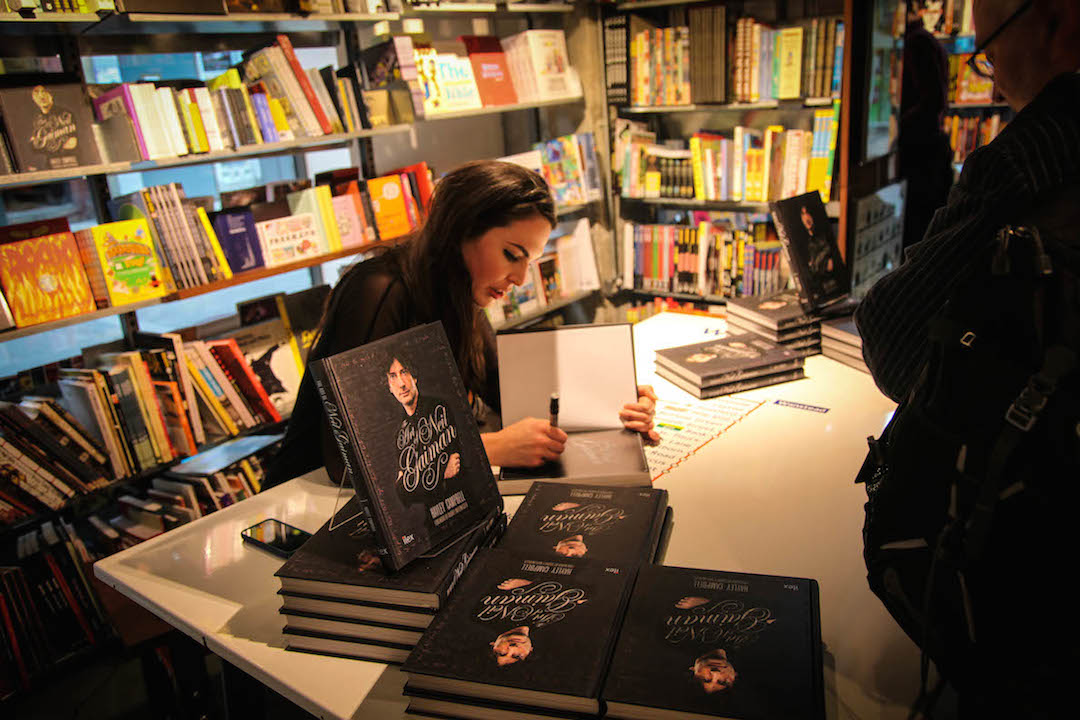 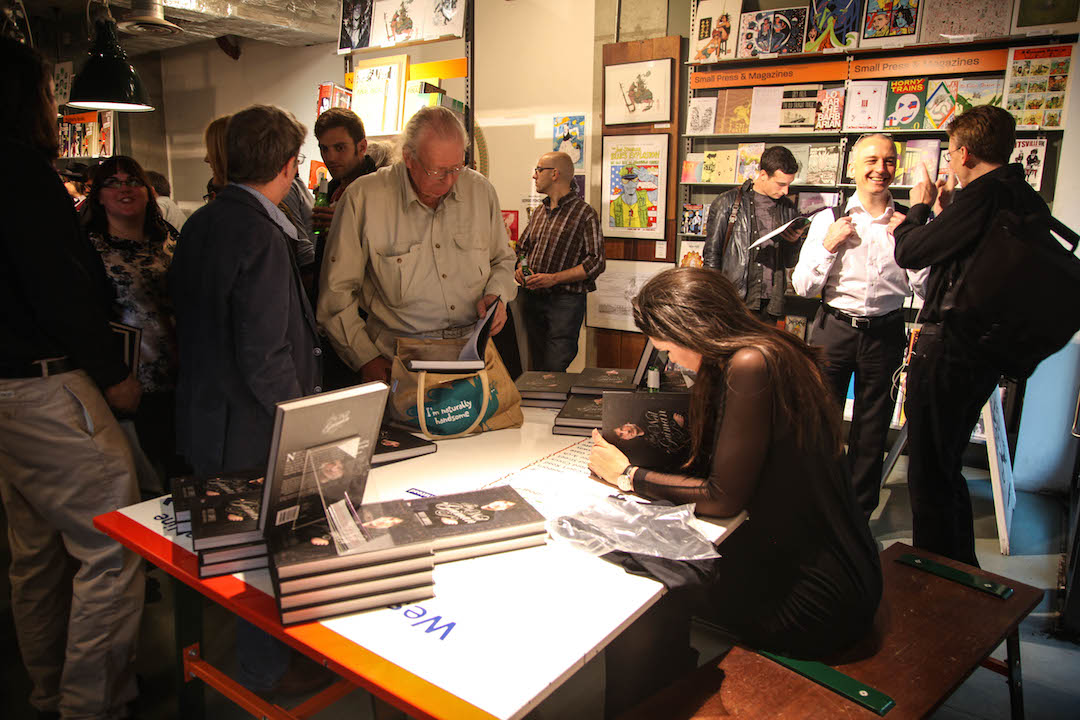 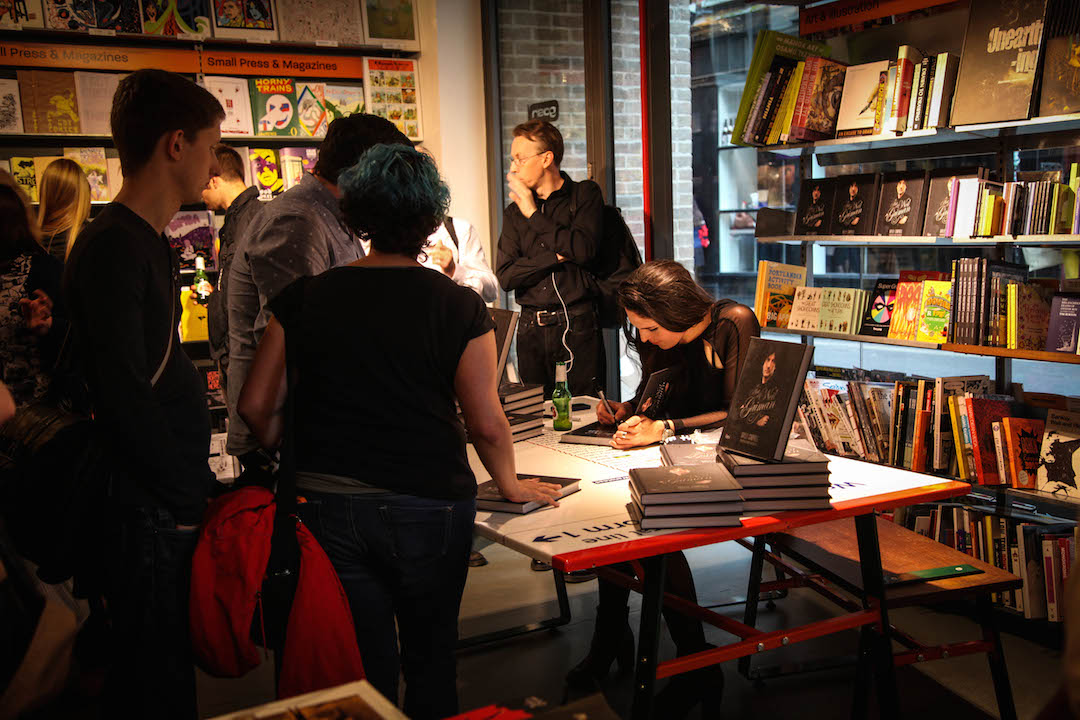 and of the crowd in general: 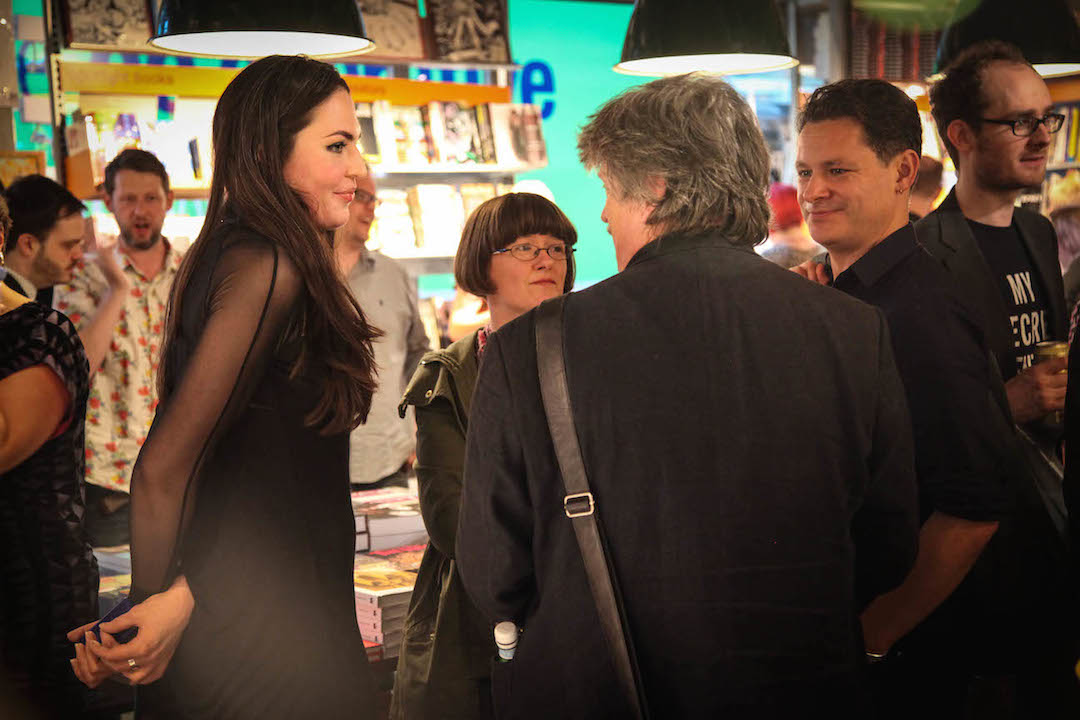 No idea who that gesticulating idiot in the flowery shirt in the background is, but partially hidden behind Hayley is Amazing15's Martin Stiff, who designed the book (the other half of Amazing15, Marcus Scudamore, can be seen far left looking faintly suicidal at having to listen to the aforementioned flowery-shirted idiot), while talking to Hayley is Pádraig Ó Méalóid, who gave notes on Hayley's manuscript, and to his right erstwhile Ilex commissioning editor Tim Pilcher, whose idea the book was. Also at the launch were these folk: 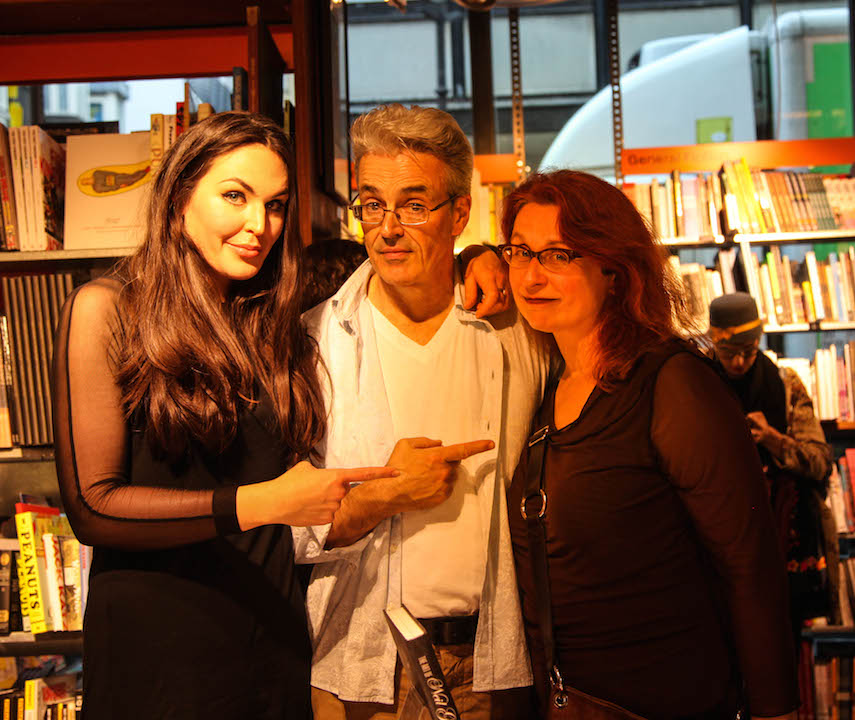 On the right Audrey Niffenegger, who wrote the foreword to the book, and in the middle Hayley's dad, cartoonist Eddie Campbell, whose collaboration with Neil Gaiman, The Truth Is a Cave in the Black Mountains – a performance of which I caught at the Barbican the Friday before (Hayley did a brief Q&A onstage with her dad and Neil at the end) – features in the book. I've mentioned Eddie in passing on Existential Ennui once or twice before; he's one of the most important cartoonists this country has produced (although he emigrated to Australia thirty years ago), indeed one of the most important to ever have worked in the medium. He's probably best known for From Hell, his collaboration with Alan Moore, but his own comics are as good and in many cases even better, drawing on his own life (literally) to create a beguiling mix of autobiography and philosophy. My favorite of his works is How to Be an Artist (The King Canute crowd runs it a close second), which was originally serialized in the anthology comic Dee Vee in the late-1990s and then collected and expanded into this edition: 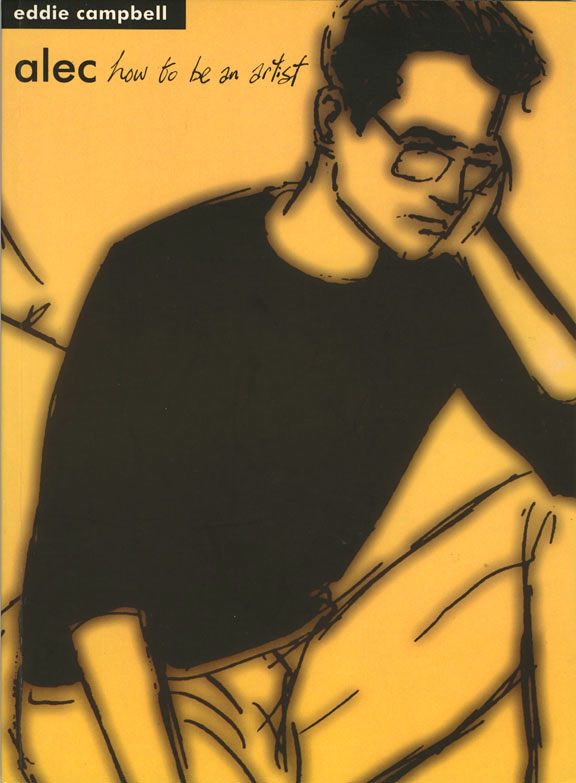 which was published under Eddie's own eponymous imprint in 2001. It's a rich, wry, affecting take on how a person might choose to become an artist – in this case a comics one – commit to live as an artist and try to make a living as an artist (or not, as the case may be) and how fate has a habit of intervening in all of those things when you least expect it. But more than that it's an evocation of a particular time and scene, one that I still recall vividly and with great fondness: the British comics scene of the 1980s and early 1990s, especially the bit that grew out of the Fast Fiction/Escape small press scene, which Eddie was a part of. I first encountered Eddie's work in various small press anthologies – not least Fast Fiction and Escape – in the mid-1980s (when I was in my mid-teens) bought from the Fast Fiction table at the Westminster Comic Mart, and that formative aspect of his career weaves through the narrative of How to Be an Artist, for me lending the enterprise an additional sentimental appeal. 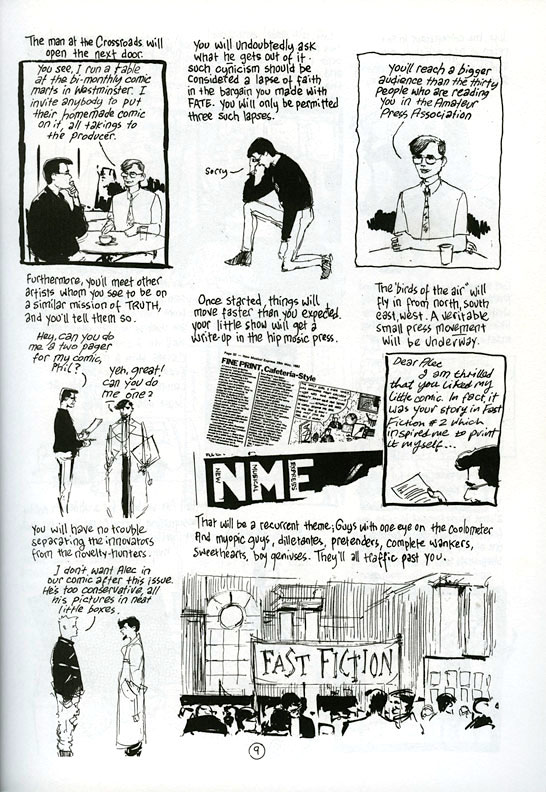 Anyway, knowing that Eddie was going to be at the launch party for Hayley's book I took along my copy of How to Be an Artist in the hope that Eddie might sign it. In the event he did more than that: 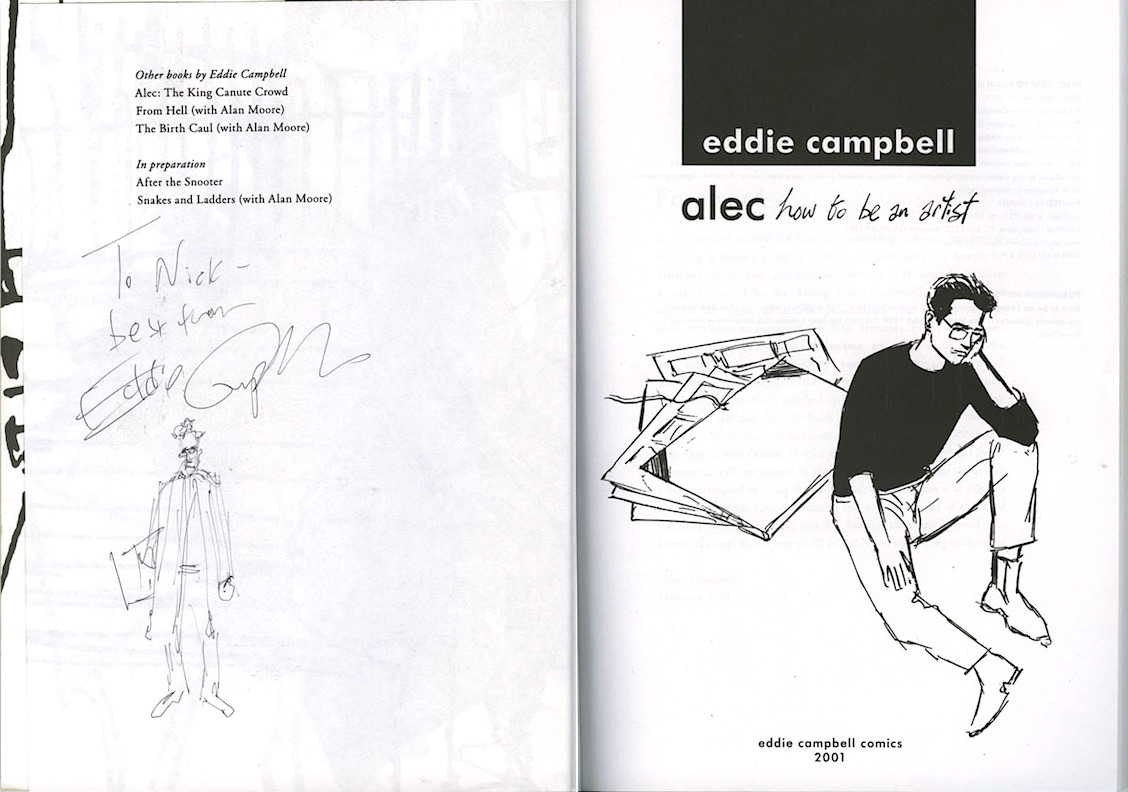 He drew a portrait of himself as well, opposite the similar portrait of a much younger Eddie Campbell on the facing page. It perhaps doesn't have quite the same impact as Hayley's cock, but I shall treasure it equally. 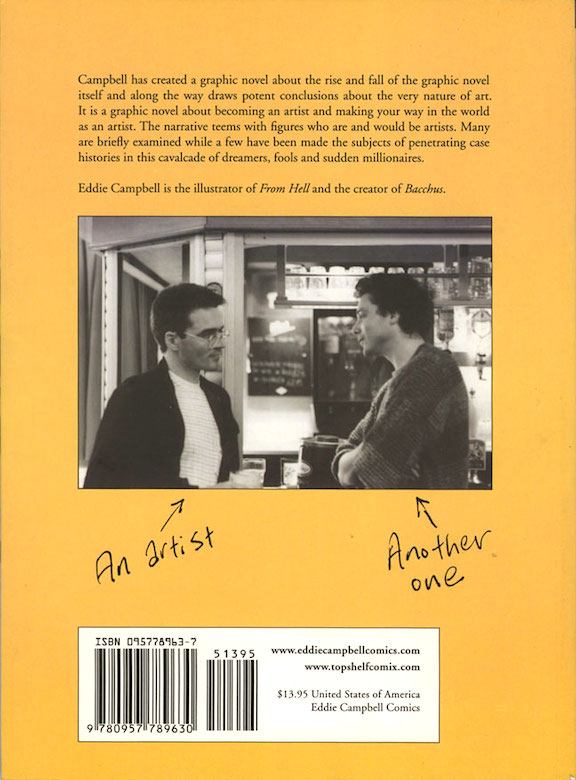