First, an admission: this latest book in this series of posts on non-fiction first editions was something of an eleventh-hour addition. I was inspired to track it down as a result of writing the first post in the run, on Patrick Seale and Maureen McConville's Philby: The Long Road to Moscow. Y'see, on the dustjacket back flap of that biography, there's a note to the effect that Seale and McConville assisted Philby's third wife, Eleanor, in the writing of her memoir about her master spy husband. My interest duly piqued, I set about tracking down a copy of that memoir, and managed to find a near fine first edition which the seller – Jenny at Lost World Books in Great Yarmouth – was kind enough to send to me in record time – which just goes to show how Existential Ennui's carefully cultivated air of meticulous planning and rigorous scheduling is in reality little more than flighty but ultimately serendipitous happenstance. And here is that book: 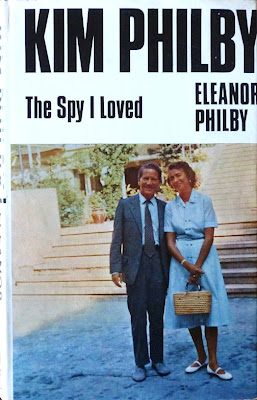 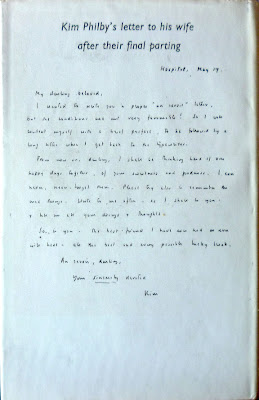 This is the hardback first edition of Kim Philby: The Spy I Loved by Eleanor Philby, with a dustjacket front cover photo by Olga Mathews. It was published in the UK by Hamish Hamilton in 1968 in conjunction with paperback publisher Pan Books, who issued a simultaneous mass market softcover edition. Essentially it's Eleanor's memoir of her time with Kim, from her first meeting with him in a Beirut bar in 1956 (when Eleanor was still married to New York Times correspondent Sam Pope Brewer), six days before the Suez war exploded, to their final parting in 1965, when Eleanor left the now-defected Philby in Moscow. Although the book isn't as linear as that would suggest: for example it begins with Kim's disappearance from Beirut in January 1963. 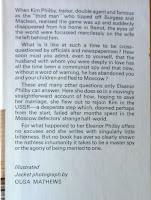 Published just a year after Philby's own autobiography, My Silent War, it's the kind of book you'd have thought might have been something of a small sensation back then, and well-remembered now; Eleanor writes in a lucid, unfussy manner, perhaps assisted by journalists Seale and McConville, and it's certainly an intriguing tale, told from an insider's perspective. But that doesn't appear to be the case. After the twin 1968 hardback/paperback editions there were no further UK printings. AbeBooks has just twelve copies of the Pan paperback listed worldwide, and only around seven copies of the Hamilton hardback edition. Meanwhile there are only six copies listed of the 1968 US Ballantine paperback, which goes under the alternate title The Spy I Married – thus rather missing the point of alluding to Fleming's The Spy Who Loved Me.

There's precious little about the book elsewhere online, either. This contemporaneous 1968 Time review of four Philby-related books mentions it in passing, and it was used as a source for this 2003 Guardian piece on spies and their lovers, but that's about it. One has to wonder why it fell out of print so swiftly, particularly when it has some good images in it too, including Kim's handwritten note to Eleanor after their final parting on the back cover, Jane Bown's great photo of Philby (also used on the cover of the aforementioned Philby: The Long Road to Moscow), and a couple of Eleanor's own pics from Beirut. 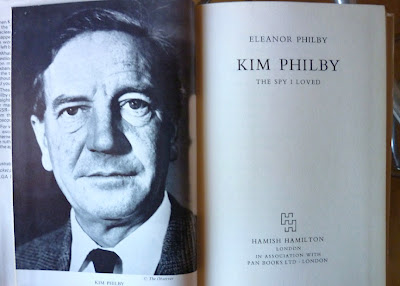 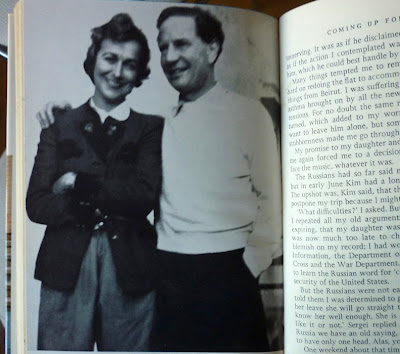 In fact there's probably more online about the 2004 movie the book inspired. A Different Loyalty was directed by Marek Kanievska, who also directed Another Country (1984) and Less Than Zero (1987 – and which, incidentally, has a terrific hip hop/rock soundtrack); it stars Rupert Everett as Kim and Sharon Stone as Eleanor, renamed respectively as Leo and Sally Tyler Cauffield. The book isn't credited, but the film's synopsis suggests (I haven't seen the movie) that the story is very similar. Judging by its reviews, however, it's apparently rather arid; Slant magazine (whoever they may be) labelled it a "dry-mouthed melodrama in serious need of a more Sirkian touch".

Even so, one would have thought its release might have prompted a reissue of Eleanor's memoir. Such was not the case, however, and sadly The Spy I Loved seems destined to lurk in semi-obscurity. Although perhaps this post will go some small way towards addressing that...

And that's about it for this run of posts on non-fiction books... although I do have one further non-fiction title I might be able to squeeze in over the next day or so – a political work which I bought in a Lewes charity shop the other week, and which is actually signed by its author. But whether I manage to post something on that or not, the next run of posts will be on a crime fiction author who, once again, I was moved to investigate thanks to Book Glutton after he left a comment on this post back in March. That's P. M. Hubbard – coming soon...
Posted by Nick Jones (Louis XIV, the Sun King) at 17:27