As part of Dennis Lehane and George Pelecanos Week, here's a great big beast of a book comprising three novels by the latter: 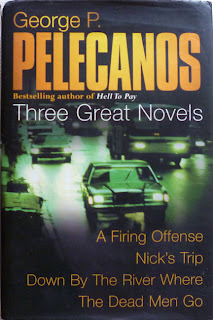 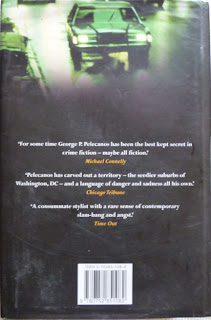 That's the 2002 Orion UK hardback first omnibus edition of George Pelecanos' first, second and fourth novels: A Firing Offense (1992), Nick's Trip (1993) and Down by the River Where the Dead Men Go (1995), which, together, form the Nick Stefanos trilogy. And as that loose title suggests, all three star Nick Stefanos, who starts out as a salesman in an electronics store in the first book, helping to find a missing coworker; earns his P.I. license in Nick's Trip and investigates the disappearance of a school-friend's wife; and decides to stick to bartending in the third novel, only to get tangled up in a murder. They're all written in the first person, narrated by Nick; when Pelecanos switched to the third person for his third novel, 1994's Shoedog (switching back again for Down by the River...), he's stated that he found it "liberating".

As you'd expect from a book comprising three other books, Three Great Novels is a weighty tome, clocking in at over 600 pages. And in fact copies of this hardback edition of the omnibus aren't that common; paperbacks are plentiful online, but hardcovers number in the single figures, and go for at least thirty or forty quid. I struck lucky on this copy though: it's a little grubby, but then it cost me less than a fiver, so I can't complain. The hardcover's scarcity may be down to it being the first time that these novels made it into hardback in the UK (large print editions aside); unlike the US, where all three were initially issued in hardback by St Martins, in the UK Serpent's Tail published the third book in the trilogy, Down by the River... in paperback in 1996, then followed it with A Firing Offense in 1997 and Nick's Trip in '98, also both in paperback. Not sure why they decided to publish the third novel first, but maybe it was just to stay abreast of the 1995 US publication of the book. In any case, effectively, Three Great Novels represents the UK hardback debut of all three books.

Orion have knocked out loads of these 'Three Great Novels' omnibuses (omnibi?), collecting up all manner of authors. George Pelecanos got the 'Three Great' treatment again for his Derek Strange and Terry Quinn books (excluding the prequel, Hard Revolution), while everyone from Ian Rankin to Harlan Cobin to James Lee Burke and Robert Ludlum has been omnibus-ized in this manner in the crime and thriller field (with very similar cover designs), as well as, further afield, Erica James, Maeve Binchy and Louise Bagshaw. Other publishers have adopted or appropriated or possibly even originated (I've no idea who started using it first) the 'Three Great' tag, bringing together three Bronte books or a trio of Thomas Hardys or Charles Dickenses(es). I guess it's just the modern replacement for the word 'omnibus' (are people really not familiar with the word 'omnibus' these days?), the addition of the 'great' presumably adding a bit more pep in publishers' eyes. And who knows: maybe it works. Perhaps we really are so gullible that we're persuaded to buy a book simply because the publisher of that book tells us it's 'great'. I mean, I bought this one. So, y'know. Great.
Posted by Nick Jones (Louis XIV, the Sun King) at 05:00