It's back to the signed editions again, following a Beautiful British Book Jackets detour and a Westlake Score-and-review. And this next signed book is a real curiosity: an obscure science fiction novel by an author who seemingly only had the one book published... 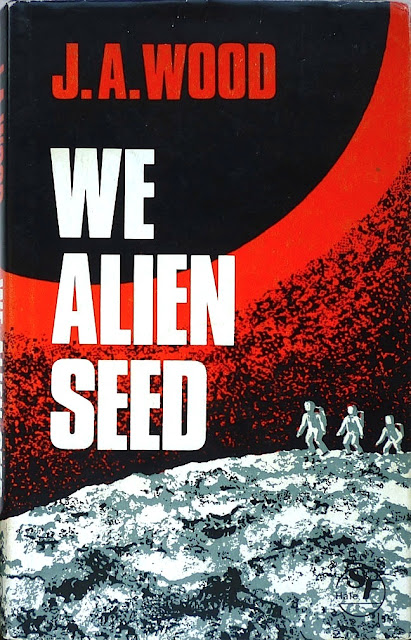 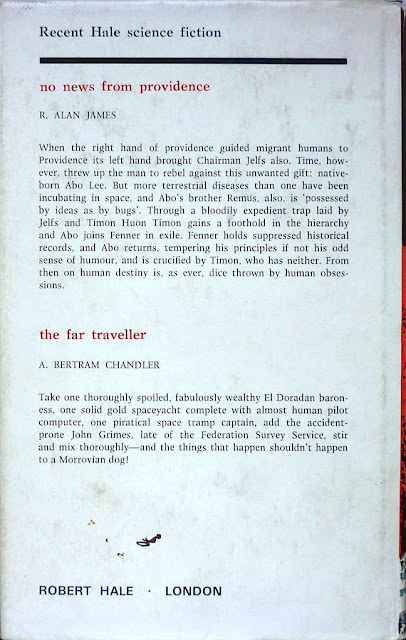 J. A. Wood's We Alien Seed was published in hardback in the UK by Robert Hale in 1979, under a rather nice dust jacket designed by the painter Helen Hale (any relation...?). Despite much feverish googling I've not been able to find out much about the elusive Wood; there's a single listing for the author on the Internet Speculative Fiction Database (for We Alien Seed), but other than that I've drawn a blank. Perhaps, like another science fiction author I blogged about a couple of years ago, the now not-so-mysterious Michael Vyse, this post will prompt a comment from someone who either knows the whereabouts of J. A. Wood, or can provide further information on the author, or who might even be able to shed light on who "Pam" and "Alan" are: 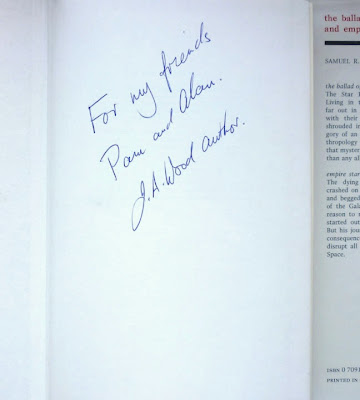 Evidently they were/are friends of Wood, and since I found this copy of We Alien Seed in the Lewes Castle bookshop (of all places; its stock mostly consists of history and local interest tomes), it's reasonable to assume that either they or Wood have some kind of connection with the Lewes area. 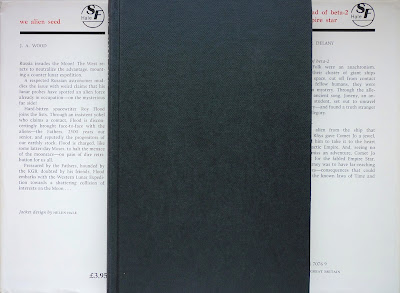 The Hale edition of We Alien Seed was the novel's only printing; there are only four copies listed on AbeBooks, three of those ex-library (and none of them signed). It's certainly something of an oddity, a comedy SF tale (much like another one-off novel I wrote about last year, Bernard MacLaren's Day of Misjudgment, which I also bought in Lewes) about a writer for Sci-Fi-Fact magazine who has a close encounter with an alien species in Wales (!) – the "Fathers", who "used their knowledge to seed this planet and its crude native inhabitants with genealogical traits similar to their own", and thus "influenced the course of evolution... directing the dominant strain towards a reproduction of themselves". Which makes me wonder if J. A. Wood was inspired by Arthur C. Clarke and Stanley Kubrick's 2001: A Space Odyssey, and if in turn Ridley Scott's Prometheus was inspired by We Alien Seed.

Moving on, and later in the week I'll have a signed edition by a thriller writer I've featured on Existential Ennui a fair few times already, featuring a dust jacket which is already in the Beautiful British Book Jacket Design of the 1950s and 1960s gallery. Before that, though: a review of another early Donald E. Westlake crime novel...
Posted by Nick Jones (Louis XIV, the Sun King) at 05:44