NB: featured as one of this week's Friday's Forgotten Books.

After that showcase of Peter Probyn's lovely dust jackets for Francis Clifford's thrillers, let's stay on an art and design tip with another signed edition, one which hasn't been signed by the author, but by the cover artist... 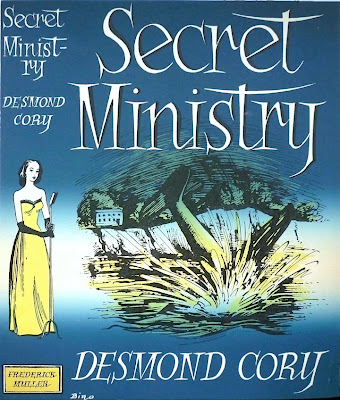 Desmond Cory's Secret Ministry was first published in the UK by Fredrick Muller in 1951, under a dust jacket designed by Val Biro. It is, as we're all doubtless well aware, since I reviewed it earlier this year, Cory's debut Johnny Fedora spy thriller. However, the jacket seen above isn't the same one as wrapped the copy of the Muller first edition I wrote about back in January; it is, in fact, a proof of the wrapper's front and spine, which I acquired from book and art dealer David Schutte – who represents Val Biro's work – along with this:

A pristine proof of the full jacket, with Muller's publication date stamp on the front flap. Val's original artwork is seemingly long lost (unless anyone knows otherwise...), but publishers would often send Val a proof of the jackets he designed, and such was the case with Secret Ministry. Finding a first edition of Secret Ministry, let alone one in a dust wrapper, is nigh on impossible – I had to order mine from an African website, remember – so to come into possession of not only a pristine wrapper but an additional proof of the front and spine is quite something. 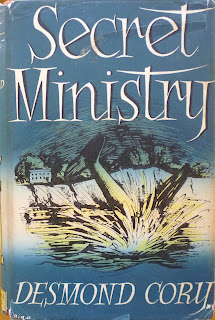 David brought the jacket(s) with him to Saturday's Lewes Book Fair (along with a piece of original cover art, which shall, for the moment, remain a mystery...), after I'd asked him at one of the Midhurst Book Fairs if he had either the original artwork or a rough. Obviously he didn't, but after rummaging in Val's loft he came up with these proofs instead. Val himself was actually at that Midhurst show as David's guest, and having heard that he'd be there beforehand, I took along my copy of the Muller edition of Secret Ministry. Initially Val thought that the wrapper design wasn't one of his, until David pointed out Val's signature at bottom left of the front cover, whereupon Val kindly signed the reverse of the jacket front flap: 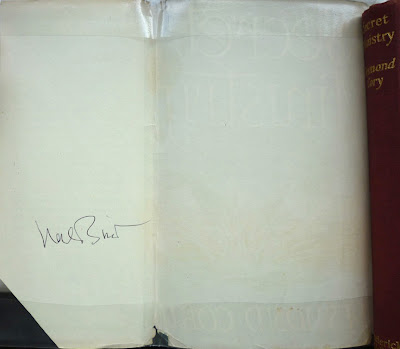 So I now own not only the single (physical) copy of Secret Ministry I've ever encountered, but its jacket bears Val Biro's signature. Meanwhile I've replaced the image of the slightly battered (but now signed) jacket wrapping my copy of Secret Ministry in the Beautiful British Book Jacket Design of the 1950s and 1960s gallery with an image of the proof – and very lovely it looks, too.

I've got much, much more to come from Val Biro in the future, but I'm staying with Desmond Cory for the next post, with one of the very few signed books of his that I've come across...
Posted by Nick Jones (Louis XIV, the Sun King) at 04:42