Before we get stuck in to the signed editions again, and having added another fabulous Denis McLoughlin dust jacket – this time wrapping the 1962 T. V. Boardman edition of Donald E. Westlake's 361 – to the Beautiful British Book Jacket Design of the 1950s and 1960s page, I thought I'd update the Beautiful Book Jackets page further with a few more covers, bringing the total in the gallery up to 85. All of the books in this batch were published by Collins in the UK, and two of the wrappers were provided by crime writer and critic Mike Ripley, who's now contributed a creditable eight covers to the gallery (and whose latest "Getting Away With Murder" column for Shots is up now).

Let's take a look at my offering first, which I picked up just the other day in a Lewes charity shop: 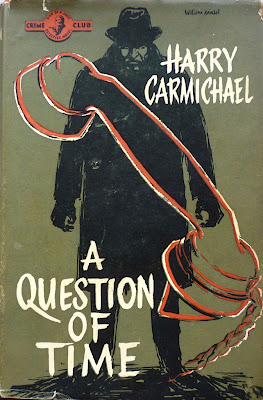 A Question of Time by Harry Carmichael, published in hardback in the UK by Collins in 1958. I'm not familiar with Carmichael's work, but he had a heck of a lot of crime fiction published from 1951 to 1979, both under his Carmichael alias (his real name was Leopold Horace Ognall) and the nom de plume Hartley Howard – getting on for a hundred books in total. There's certainly a demand for Carmichael first editions: a copy of the Collins first of A Question of Time recently sold on eBay for over forty quid, which is rather more than the £3.95 I paid for my one. Mind you, the Collins edition appears to have been the only printing of the novel, so it's no wonder it's sought after by collectors. 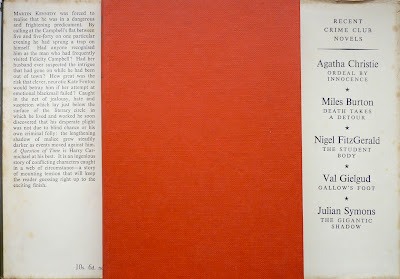 The wrapper design is uncredited, but there's a signature at top right of the front cover: William Randell (I originally thought it was "Kandell", but book dealer and crime fiction aficionado Jamie Sturgeon put me right – thanks, Jamie!), who illustrated the wrappers for a run of Collins-published Carmichael novels from the mid-1950s onwards, among them Put Out That Star (1957), James Knowland: Deceased (1958) and, I believe, Of Unsound Mind (1962), which deploys a telephone receiver design device similar to that of A Question of Time. (The symbiotic relationship between writers and cover artists is a theme I'm planning on returning to next week.) 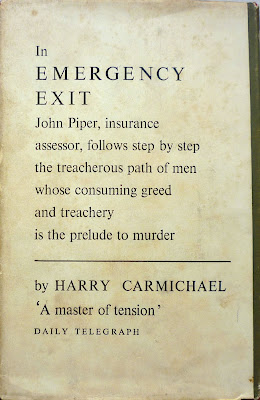 Turning to the two covers sent to me by Mike Ripley, and both of those are from Alistair MacLean novels, as it was my posts on Where Eagles Dare and Ice Station Zebra that inspired Mike to scan his MacLean jackets: 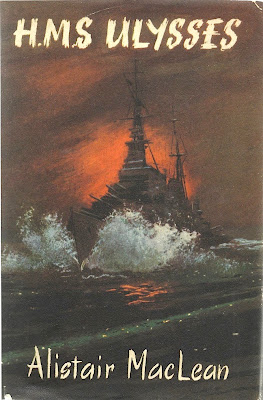 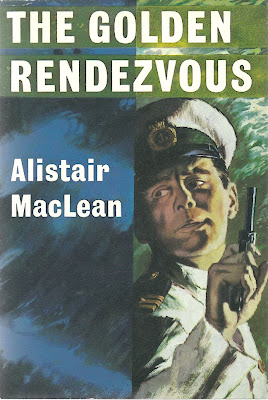 That's the 1955 Collins first of MacLean's debut novel, H.M.S. Ulysses, cover design by John Rose, and the 1962 Collins first of The Golden Rendezvous, cover design by John Heseltine. I already had Rose and Heseltine in the Beautiful British Book Jackets gallery, the former with his design for the 1960 Collins first of Geoffrey Jenkins's The Watering Place of Good Peace – which again was supplied by Mike – the latter with his design for the aforementioned Ice Station Zebra (Collins, 1963), but it's nice to be able to include a couple more.

Incidentally, veering off-topic momentarily, Mike mentioned that he's encountered problems commenting on Existential Ennui recently, something that a few other folk have said as well. I did, as a result, experiment with removing the captcha word recognition step for a day or two (still leaving comment approval on), but my email in-box started filling up with spam comments again, so I've re-enabled word recognition. Apologies if that means your comments go astray on occasion, but don't blame me, blame the annoying bastards attempting to advertise shoes and portrait oil paintings and electricians and, most bizarrely of all, the services of convicted felons. The mind boggles, it really does.

Anyway, it's back to the signed editions next, with an obscure science fiction first edition which I again found in a Lewes establishment...