Returning to the signed editions following a review of Donald E. Westlake's Killing Time, here's a book I picked up for a song off a table outside one of Cecil Court's secondhand bookshops: 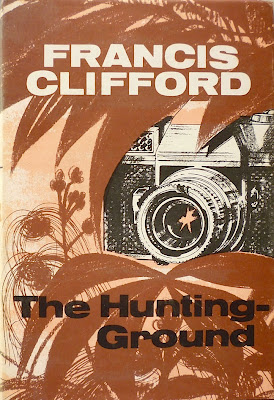 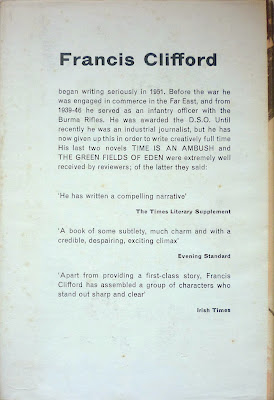 Francis Clifford's The Hunting-Ground, published in the UK by Hodder & Stoughton in 1964. Clifford's ninth novel, it's the story of an Irish photographer who witnesses a plane crash in the Caribbean, and who consequently becomes "suddenly and dangerously the subject of governmental interest, suspicion and attention". Not having read The Hunting-Ground yet I can't say for certain how suddenly or indeed dangerously events progress from there, but this pithy Kirkus review suggests it's a solid entry in Clifford's canon, and for my part I have read perhaps Clifford's best-known novel, The Naked Runner, and that was clammily exciting, plus I know that crime writer and critic Mike Ripley is a fan of the under-appreciated Clifford's work – via his Top Notch Thrillers imprint Mike brought back into print two of Clifford's novels, Time is an Ambush and The Grosvenor Square Goodbye – so there's all of that too.

However, for the purposes of this particular post, we are gathered here not to debate the relative merits of the novel, but to gaze upon this: 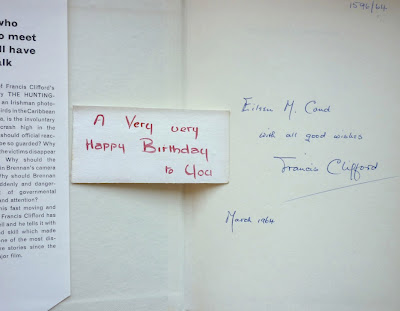 Francis Clifford's signature and dedication on the front free endpaper, along with a loosely-inserted little note which suggests that the book was a birthday present, possibly to the lucky Eileen, whoever she was. But there's also this: 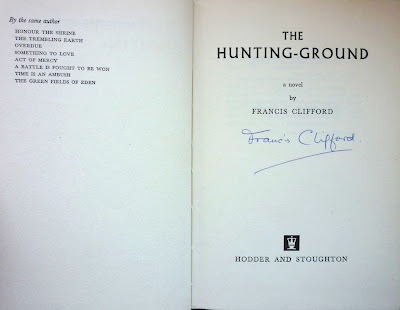 Clifford's signature again, this time on the title page. Weirdly enough, I do know of another signed copy of the Hodder first of The Hunting-Ground, this one with a letter from Clifford enclosed (I'm not saying where it is, but it's not online). Given that my copy only cost me a quid, I may still buy the other one, if only to show that letter. On the other hand, sanity may prevail, and you'll just have to live without it.

The dust jacket of The Hunting-Ground was designed by Peter Probyn, an artist I wrote about in this post on the aforementioned Time is an Ambush – in its 1962 Hodder edition, with its Probyn-designed wrapper – which I again found outside a Cecil Court bookshop going for a pittance. Both The Hunting-Ground and Time is an Ambush are already in my Beautiful British Book Jacket Design of the 1950s and 1960s gallery, but Probyn designed the jacket for one other Clifford novel besides, and as luck would have it I recently came into possession of that book as well. So in the next post, I'll be showcasing all three of Probyn's splendid wrappers for Clifford's novels...
Posted by Nick Jones (Louis XIV, the Sun King) at 05:00