Ross Thomas, The Fools in Town Are on Our Side: A Review of the Novel 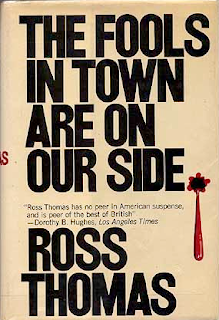 Thus far in this week's worth of posts on crime/espionage/political thriller author Ross Thomas – the third such week I've dedicated to him – I've shown you a 1968 UK first edition of Thomas's second novel, The Seersucker Whipsaw, and a 1969 UK first edition of his fourth novel, The Singapore Wink (a post which now sports an intriguing comment from the British Library; I'll try and find out what that's all about as soon as I can). Today it's time for something a little more substantial, namely a review of the writer's fifth novel, 1970's The Fools in Town Are on Our Side.

I mentioned at the end of this post last week that The Fools in Town Are on Our Side is perhaps Thomas's most ambitious book – the key word there being "perhaps". I've not read every Ross Thomas novel – just six out of the twenty-five he wrote (I'm including his five pseudonymous Oliver Bleeck books there) – so I can't make any claims on being a Thomas aficionado (unlike Book Glutton). It's entirely possible some of his other novels have a greater scope than The Fools in Town, but one thing the novel does appear to be is Thomas's biggest book. My Hodder & Stoughton first edition clocks in at 383 pages – which is, in fact, exactly the same page count as the other lengthy Thomas book I own, Chinaman's Chance, except Fools is taller and so fits more words on each page. 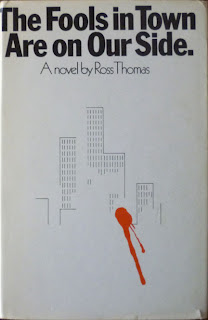 Now, all of that might strike you as unnecessary bibliographic nerd-maths (the question "Which of Ross Thomas's novels has the greatest page count?" is unlikely to arise in Trivial Pursuit, although if it did I might be more inclined to play Trivial Pursuit), and in a way it is. But the point I'm (slowly, incrementally) edging towards is that Thomas packs a lot into Fools. It feels like an epic, much more so than any of the other Thomas novels I've read. Partly that's to do with some of the locations and historical events the story encompasses, crossing continents and time periods in a dazzlingly sweeping manner. But mostly it's the way it details the life of a single character, exploring him in great depth, delving into his background in a way I haven't yet experienced in a Ross Thomas book.

The essential thrust of the plot is straightforward enough. Lucifer Dye, disgraced former agent of US espionage outfit Section Two, is hired by genius twenty-something troubleshooter Victor Orcutt to corrupt the Texan city of Swankerton. Working alongside Lucifer are two other recruits, both from the same Midwestern town: former prostitute Carol Thackerty, with whom Dye becomes involved, and ex-chief of police Homer Necessary (who develops across the course of the story from implacable enforcer to something approaching a friend). With Orcutt directing from his Swankerton hotel suite, Lucifer weedles his way into the confidence of the unofficial mob-backed head of Swankerton, Ramsey Lynch (a.k.a. Montgomery Vicker, the brother of the man who Dye got fired from Section Two), and soon has both parties in the struggle for control of Swankerton wondering which side he's really on. 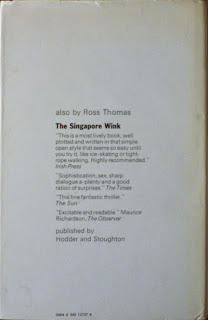 But that's only half the story. Because while the goings-on in Swankerton inform Parts Two and Three of the novel (it's divided into three parts), in Part One, chapters alternate between three or four distinct time periods, as Lucifer recounts his childhood growing up an orphan in post-Japanese invasion Shanghai – the ward of a whorehouse madam – and two key episodes as a young man and agent of Section Two in Hong Kong. It's his Shanghai boyhood that's the most arresting of these three storylines, offering the kind of deep and detailed character work that, as I say, I haven't come across in a Thomas novel before. Don't get me wrong: Thomas's characters are always fully formed (not to mention intriguingly monikered); it's just that Lucifer Dye is better explored than most. Indeed, when little Lucifer and his sort-of guardian, war correspondent Gorman Smalldane, are interned by the Japanese, what we have is a sort of miniature precursor of J. G. Ballard's Empire of the Sun.

Two events in particular shape Lucifer. The first is the death of his father, who is killed in a bomb blast in Shanghai on August 14, 1937, the second day of the Japanese attack on the city. Lucifer's low key narration during this sequence paints a horrifically plausible picture of death and destruction, reminiscent of the explosion in the Place Garnier in Graham Greene's The Quiet American:

I found myself lying there in the street, still clutching my father's left hand. There was the hand and the wrist and part of the forearm. And that was all. I couldn't find any more of him as I wandered among the dead, trying not to step into pools of blood or on pieces of flesh. Everybody seemed dead. I walked around, still holding my father's hand so that the end of his forearm dragged in the dirt and blood. It was quiet. Almost the only sound I could hear was my own voice, speaking Mandarin, asking a man without a head, "Have you seen the rest of my father?"

The second event takes place when Lucifer is a young man. Once again he has been semi-adopted by a father figure – a recurring theme, and one I'll return to in a moment – this time by Army Colonel Elmore Gay, who has elected to guide Dye from the forces into Section Two, and whose daughter, Beverly, Lucifer marries. Beverly and Lucifer live together in a small house on the edge of the campus where Lucifer is studying prior to joining Section Two, and it's there that Beverly, now pregnant, is raped and murdered in front of a helpless Lucifer's eyes.

Beverly's death is shocking, and it understandably severs any last lingering empathic link Lucifer might have had with his fellow man. A mother who died bringing him into the world, a father killed whilst holding his hand, a wife slaughtered in the most horrendous manner; raised in a Shanghai whorehouse, confined to an internment prison cell, with a succession of well-meaning but flawed father and mother figures – whorehouse madam Tante Katerine; Smalldane; Colonel Gay; Lucifer's direct boss at Section Two, Carmingler; even, in a strange way, Orcutt: it's little wonder that Dye is emotionally stunted. It's Carmingler who puts it best, identifying the malaise that afflicts Lucifer by telling him: "you don't really believe in the importance of anything, not even yourself. If your wife had lived, you might have changed a little, but she didn't and you didn't." 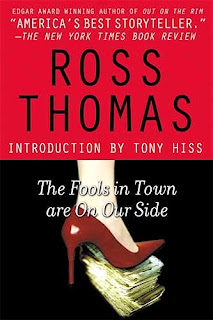 And this, in the final analysis, is what the book is: a character study of a man completely lost, not so much amoral as utterly uncoupled from the human race. Lucifer believes himself to be bereft of feeling, something that his various guardians do their best to address, but which ultimately can only be undone by he himself. The machinations of the story prior to this understanding may be contorted and comedic in places, in true Ross Thomas fashion, and the expected snappy dialogue and innate sarcasm may be present and correct. (I rather liked one scene where Lucifer and a heavy, waiting for another heavy to return, stand around watching a bee. The heavy imparts that "bumblebees ain't built right for flying". Narrates Lucifer: "We pondered the mystery of it all until Shorty came back.") But there's a darker, more reflective motif underlying the convoluted plot, one which lends The Fools in Town Are on Our Side an unexpected profundity.

Anyway, that's my take on the book; Olman reached a slightly different conclusion in his review last year, so go read that for another perspective. One last thing before we move on though, something I can't recall ever having experienced before whilst reading a novel: one of the characters in Fools bears the same name as me. This Nick Jones only enters the story in the latter stages, but it was quite jarring to be reading about a character identically christened to me; I kept looking for similarities between us, even though he's a Jamaican gangster and I'm, well, not. And we certainly don't share the same nickname... (You'll just have to read the book yourself to discover what that is; I'm not sure I could get away with repeating it here.)

Next up, something a bit lighter: a first edition cover gallery, comprising the nine Ross Thomas novels published by Hodder & Stoughton in the UK...
Posted by Nick Jones (Louis XIV, the Sun King) at 09:40