Well, I had intended to get this latest week's worth of posts on crime/espionage/political thriller writer Ross Thomas underway over the weekend. But fate, as is its wont, rather put the mockers on that, presenting me variously with a broken down car and a buggered-up back ("events, dear boy, events"). Fun! So Ross Thomas Week, Mark III – final post in Mark I here, final post in Mark II (a.k.a. Bleeck Week) here, and a review or two of Thomas's novels here and here – is kicking off today instead – which, considering it's Monday, is probably the correct day for a week to begin anyway. Over the next few days you can expect posts on little-seen UK first editions of some of Thomas's early novels; a review of the author's biggest book; and a cover gallery – perhaps even two cover galleries. We'll see how we get on. But let's begin with this: 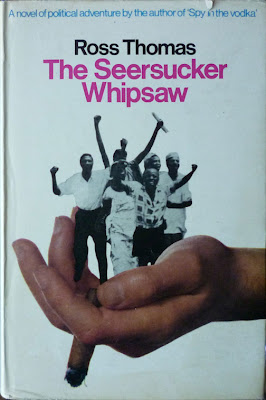 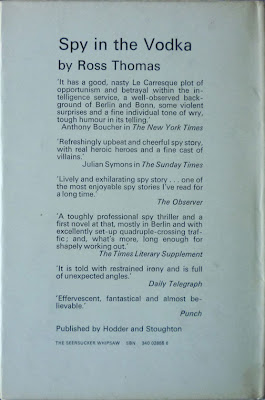 A UK hardback first edition of The Seersucker Whipsaw, published by Hodder & Stoughton in 1968 (originally published in the US in 1967). This is either Ross Thomas's second or third book, depending on who you believe; in the UK it was certainly his second, as the only other Thomas book mentioned either in the prelims or on the cover is the author's 1967 debut, Spy in the Vodka – which, of course, was published in the States under its original name of The Cold War Swap in 1966. On top of that, the 1968 Hodder edition of Cast a Yellow Shadow (published in 1967 in the US) lists both Spy in the Vodka and The Seersucker Whipsaw under "Books by Ross Thomas" on the half-title verso. So here in Britain, The Seersucker Whipsaw was definitely Ross Thomas's sophomore novel. (I mistakenly stated that Cast a Yellow Shadow was his second novel in both that review I linked to above and in my original post on that book. Silly sod. Pay attention next time, Jones.)

The dustjacket front flap of the Hodder edition of Seersucker confirms that too, and also gives us an inkling of what the book's all about:

Clinton Shartelle, a Southern gentleman partial to seersucker, is the best rough-and-tumble political campaign manager in the United States. Peter Upshaw is a public relations man who searches out Shartelle and persuades him to run a very unusual campaign. The candidate is Chief Sunday Akomolo, and the office sought is the premiership of Albertia, an African colony soon to achieve independence.

In Albertia, Shartelle and Upshaw encounter a score of exotic characters and situations. Their strategy of American political 'razzmatazz' collides head-on with African cultures, and the results are grotesque, delicious, humorous, hazardous – and violent.

Hmm. Doesn't really explain what either a "seersucker" or a "whipsaw" are – I believe the former is a thin cotton fabric, while the latter presumably relates to Peter Upshaw – but it at least gives the broad strokes. The jacket on this edition – which is different to the US William Morrow one – was designed by Baker/Broom/Edwards, about whom I knew little when I originally noted in this post that they also designed the jacket for the Hodder edition of Cast a Yellow Shadow, but have since discovered – thanks to this excerpt from the September 1967 Design journal – that they worked together at the Watford School of Art, set up their own design consultancy at the start of '67, and counted among their clients BBC Publications and Beechams.

One final thing to record is that the 1968 Hodder first edition of The Seersucker Whipsaw might just be the scarcest and most valuable of all Ross Thomas's books. Sure, US first editions of his debut, The Cold War Swap, can set you back anything up to £500, but there is a relatively plentiful supply of those. The Seersucker Whipsaw, however, or at least the UK first of it, is in very short supply: at time of writing there are only five copies listed on AbeBooks from anywhere in the world, ranging from £75 to over £250; there are fewer copies of it for sale than even of Spy in the Vodka – the UK first of Cold War Swap, remember – of which AbeBooks has six copies listed. I bought my one for just over a tenner, which was an absolute steal (I shan't reveal from whom because I have no wish to embarrass the seller), and means that we all get to look at that fine photographic/collage cover, which, I believe, has never before been seen on the internet.

Next up, another UK first edition, this time of Thomas's fourth novel... at least, I think it's his fourth...
Posted by Nick Jones (Louis XIV, the Sun King) at 09:53