And so this week's worth of posts on crime/espionage/political thriller author Ross Thomas rumbles on. To recap: on Monday I showcased a 1968 Hodder first edition of Thomas's second novel, The Seersucker Whipsaw, while on Tuesday I showcased a 1969 Hodder edition of his fourth novel, The Singapore Wink. Then on Wednesday I posted a review of his 1970 novel The Fools in Town Are on Our Side, and finally yesterday I presented a cover gallery of all nine of the Hodder first editions of Thomas's novels, including his pseudonymous Oliver Bleeck ones.

Today we move on from the Hodder & Stoughton editions to take a look at a Ross Thomas book published by Hamish Hamilton, the British publishing house who picked up the rights to Thomas's new novels after Hodder. As we've discussed previously, many of those Hamilton editions sport covers "designed" by one Beverley le Barrow, otherwise known as glamour photographer Beverley Goodway, who charted a rather more celebrated parallel career course as a snapper of Page 3 topless models in the Sun newspaper. But of all the Ross Thomas (and Oliver Bleeck) Hamilton first editions Beverley's cover photos appeared on – some which are quite hard to track down these days – this one proved the most elusive: 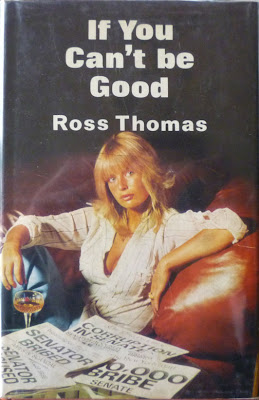 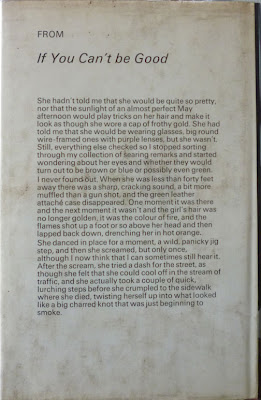 The UK first edition of If You Can't Be Good was published by Hamish Hamilton in 1974, a year after the US William Morrow first, and it was Thomas's eighth novel (eleventh in you count the Oliver Bleecks). When I was in the midst of my feverish hunt for Ross Thomas UK firsts a few months back, this Hamiltion edition of If You Can't Be Good was a right bugger to get hold of. There weren't any copies available online at all from UK-based sellers, so I had to get one from South Africa of all places (from SA Book Connection to be precise, who did me a good deal – hello, Ian!). Typically, a couple have since popped up for sale online from UK sellers, including one on AbeBooks for fifteen quid. So you can grab yourself a bargain if you're quick; the same dealer also has a selection of other Ross Thomas UK firsts for very reasonable prices indeed. (Nicholas and Helen Burrows of Coombe-Hill-Books are the sellers in question: tell 'em I sent ya.)

(An aside: I can't say this for definite, but I'm beginning to suspect all the blogging I've done on authors like Ross Thomas/Oliver Bleeck and Donald Westlake/Richard Stark is starting to raise awareness of the scarcity of some of those authors' British first editions, at least amongst a few book dealers. The flipside of that of course being whether or not I'm generating any interest in those authors by book collectors – either extant or latent. In a nutshell: by collecting these books and then writing about them, am I/Existential Ennui having an effect on whatever market – or absence thereof – there might be for these books? And furthermore, is that effect – if it indeed exists – serving either to inflate the prices of those books or causing more to come to market, thus lowering prices? Those Ross Thomas firsts on AbeBooks I've linked to above would suggest the latter, but it's an interesting notion either way...)

(UPDATE 7/7/11: almost all of those Ross Thomas firsts offered by Coombe-Hill-Books through AbeBooks have since sold. Make of that what you will...)

Those among you with reasonably long memories might recall my having blogged about If You Can't Be Good before in a Pan paperback version, which I picked up cheap when I couldn't get my mitts on a hardback. That was back when I still thought Beverley le Barrow was a woman, rather than, as he in fact is, a man. But there was no cover credit on the paperback, so I wasn't sure it was a Le Barrow effort. And if we place the two books side by side:

I'm still not entirely certain the covers are both by Beverley le Barrow (spelt, as is traditional in the Hamilton cover credits, "Beverly Lebarrow" on the hardback's dustjacket flap). The model is suitably doe-eyed and blonde in both, and the lighting is comparably flat and '70s. But there's a blue tinge to the lighting on the paperback cover, and it doesn't appear to be the same model in both. On top of that, the newspapers in the hardback picture are mocked up by the looks of it, while the ones in the paperback picture appear to be genuine.

One thing I didn't do in that previous post on If You Can't Be Good was outline the story, so let's see what the Hamilton dustjacket flap blurb has to say about it:

Decatur Lucas was an amateur historian, but he also had a reputation for unearthing scandals which government agencies would have preferred to leave discreetly submerged. He was the perfect operator for Frank Size, the greatest muck-raking journalist even Washington has ever experienced. Size had accused Senator Ames of corruption, and the accusation had appeared to stick. But why should a millionaire accept a paltry $50,000? And, as soon as Lucas took the case, the unanswered questions began to escalate. Why should the pretty daughter of the ex-Senator be so certain that her father was innocent – and why should the attache case containing the evidence be loaded with napalm? Why should the suave Ignatius Oltighe want $5,000 before he left hurriedly for Europe? Above all, what hold did the amazing Connie Mizelle have on Ames, beyond, that is, her very obvious high-octane sex appeal? The answers were murderously simple – in the end.

Ross Thomas, in one of his most exciting books, has produced a marvellous blend of mystery and bloodshed, spiced with wit and narrated at a crackling pace.

Decatur Lucas, Frank Size, Ignatius Oltighe: gotta love those Thomas monikers. And the plot seems as complex and labyrinthine as one would expect from the author.

Anyway, next I'm taking a slight detour away from Ross Thomas Week, Mark III to make a special and rather exciting announcement – although there will still be a Ross Thomas element to the post. And you can expect that announcement later today...
Posted by Nick Jones (Louis XIV, the Sun King) at 04:39