This second UK first edition I'm showing as part of Ross Thomas Week, Mark III, isn't anywhere near as scarce as yesterday's copy of The Seersucker Whipsaw, but it does boast one of the best dustjackets ever to wrap around a Ross Thomas book – US or UK: 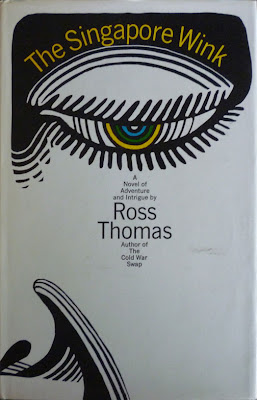 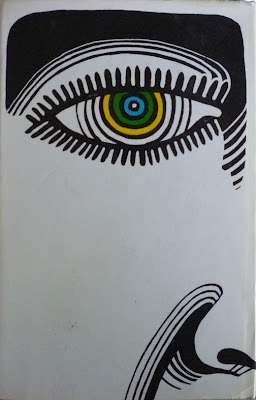 The Singapore Wink was published by Hodder & Stoughton in the UK in 1969, the same year as the American William Morrow first edition, and the dustjacket design on both editions is by the same man: Lawrence Ratzkin. Ratzkin designed some of Thomas's most memorable jackets: alongside The Singapore Wink he also created the covers (US and UK) for 1971's The Backup Men and for Thomas's 1971 pseudonymous Oliver Bleeck novel, Protocol for a Kidnapping. 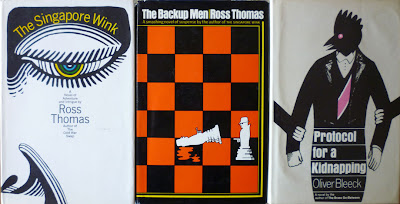 I covered Ratzkin extensively in the posts for those two books (follow the links to find out more about him – he's a fascinating guy), so I'll limit my comments here to the jacket of The Singapore Wink itself, which is, even by Ratzkin's high standards, a fine piece of work. It has to be seen in its full glory to really appreciate it though, so here it is unfolded: 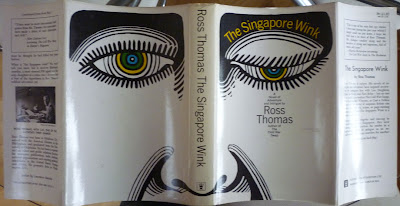 Look at that: the front and back connect up to create a whole – or rather, partial – face, one that's in the process of, of course, winking. There's also a great author pic on the back flap, which was taken by Washington, DC photographer John Burwell (hope I've got the right link there), and shows Thomas at his writing desk with one of his three Siamese cats: 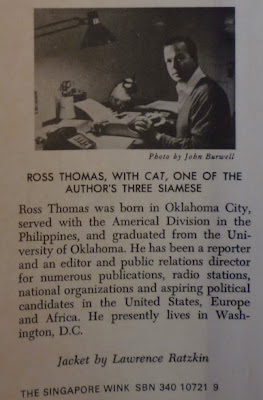 The Singapore Wink was Ross Thomas's fourth novel and is, according to the Hodder dustjacket flap copy, set in Los Angeles, Washington and, unsurprisingly, Singapore. It apparently "involves the reader in a fascinating story of intrigue as an ex-Hollywood stunt man searches for another man he thought he had killed two years before. What is 'the Singapore Wink?' We won't tell you here [awww; spoilsports], but it involves blackmail, murder, a most unusual FBI agent, and the sexy daughter of a crime czar – to name but a few of the ingredients in Ross Thomas's wildest adventure yet." So now we know. Paul on Books has a pithy review of the novel right here.

The Hodder first of The Singapore Wink isn't, as I say, as valuable or scare as The Seersucker Whipsaw, but the cheapest copy I can find for sale on either AbeBooks or Amazon from the UK is getting on for forty quid. (UPDATE 14/4/11: or at least, that was the cheapest one; a copy for £24 had since popped up on AbeBooks.) I didn't pay half that much for my copy, but then I bought that one, so, er, you can't. Sorry about that.

Moving on, next I'll have a review of what I believe is Ross Thomas's biggest book, a novel which takes in multiple locations and time periods and which stars one of Thomas's most fully realised characters: 1970's The Fools in Town Are on Our Side.
Posted by Nick Jones (Louis XIV, the Sun King) at 04:38