After yesterday's exciting – no, really – announcement about Existential Ennui being archived by the British Library, it's back to earth with a bump today, as Ross Thomas Week, Mark III trudges wearily into the weekend. Just two more posts to come in this seemingly endless series on the crime/mystery/espionage/political thriller writer, the penultimate one being the one you are reading right now, guv. And the one you are reading right now is on this book: 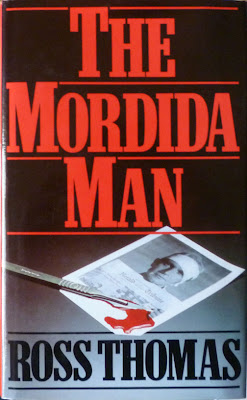 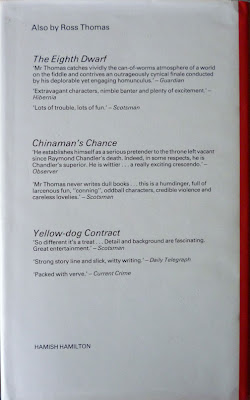 Namely the UK hardback first edition of The Mordida Man, published by Hamish Hamilton in 1981. The Mordida Man was either Ross Thomas's thirteenth novel or his eighteenth – depending on whether or not you count the author's five pseudonymous Oliver Bleeck books – and I have, in fact, blogged about it before. That post was on the US Simon & Schuster hardback first edition, published in the same year as the British one – a rather special copy of it, you might recall, as it was the copy used by Penguin in the UK to mark up their changes for the 1983 British paperback edition: 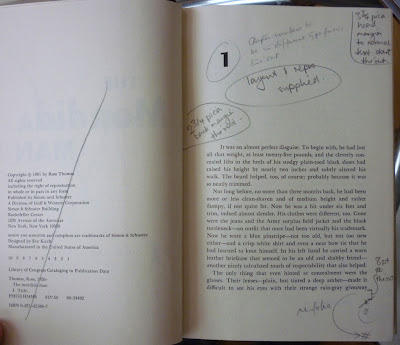 That was quite a find, but it does beg the question why would I then go and get myself a copy of the UK Hamilton hardback? The answer to which, I'm afraid, is a mixture of dedication to Existential Ennui and pure collector's madness.

When I began writing this latest run of posts on Ross Thomas, I had a vague notion of posting a cover gallery or two, most likely one on the Hodder & Stoughton editions of Thomas's books – which can be found here – and another on the Hamish Hamilton editions. Until, that is, I realised I didn't have a complete set of the Hamilton ones: I was, of course, missing a British first edition of The Mordida Man. Bugger. For a while there I figured I'd assemble the Hamish Hamilton cover gallery and simply substitute my Simon & Schuster copy of the book for a Hamilton one, but that just didn't sit right. So in a last minute change of plan, with Ross Thomas Week, Mark III well underway, I nabbed a copy of the Hamilton first online and pleaded with the seller – John Stoodley of Wymouth, Dorset – to send it double-quick. Which he did, decent chap that he is.

So now, as some of you may have been able to spot in the photo I posted yesterday – 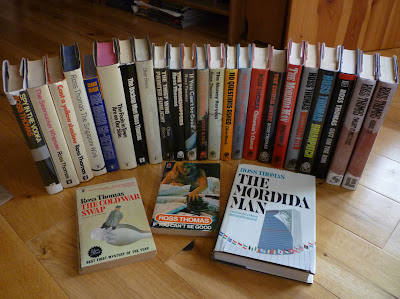 worth seeing again, I think – I have a complete set of all of the Ross Thomas Hamish Hamilton first editions. Which means three things:

1) You get to read this 'ere post, for which I have no doubt you will be eternally grateful;

2) I can now properly assemble that Hamish Hamilton cover gallery – which will form the final post in Ross Thomas Week, Mark III, hopefully tomorrow; and

3) I can show both the US and UK editions of The Mordida Man side by side:

Of the two, I think I prefer Janet Halverson's dustjacket design for the American Simon & Schuster edition. David Butler's design for the UK edition is fine, but very typical of espionage-themed novels of this period; Halverson's image, on the other hand, with the surface of the United Nations building in New York peeling away to reveal a wad of $100 bills, is a more original take on the novel's themes of money and politics (which I outlined in that original post on the book).