For this final post in this series on a load of Michael Moorcock paperbacks I bought in the Lewes branch of Oxfam a few months back, we have these: 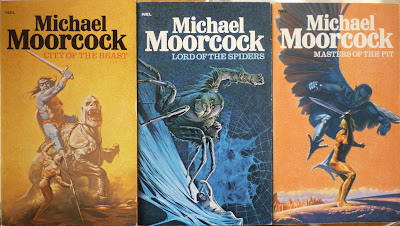 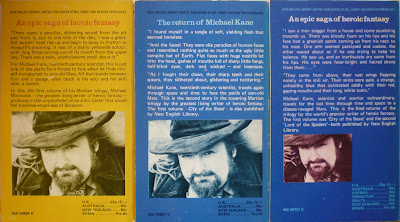 Left to right are City of the Beast, Lord of the Spiders and Masters of the Pit, all published in paperback by New English Library in 1971 (all three are first printings). Together they comprise the Martian or Warrior of Mars trilogy, and all feature twentieth-century scientist Michael Kane, who finds himself transported to ancient Mars and has to battle all manner of vile beasties. The novels were initially published under the pseudonym Edward P. Bradbury by Compact in, I think, 1965 (I'm a little unsure about that date because the third volume, Masters of the Pit, has a copyright on 1969 inside the book); Masters of the Pit was also originally titled Barbarians of Mars. So they are among Moorcock's earliest novels.

And we can end this run of Moorcock posts on a high note, because unlike yesterday's Elric post – where I was struggling to identify the various cover artists – here, having scoured the internet, I believe I've positively identified the man who painted all three of the NEL covers: Richard Clifton-Dey, a British book cover artist who was a contemporary of the likes of Chris Foss and Jim Burns. Clifton-Dey's Wikipedia entry doesn't list the three NEL Mars paperbacks as being by him, but during my research I chanced upon this thread on the Vault of Evil messageboard, which shows other examples of Clifton-Dey's work and reprints a list of his covers from The Paperback Fanatic #9. And as it 'appens I own a copy of another paperback Clifton-Dey illustrated the cover for: the 1976 Panther edition of J. G. Ballard's Concrete Island – bought in Kim's Bookshop, Arundel, reviewed here, and seen just above on the right there. Definitely the work of the same man as illustrated Moorcock's Martian trilogy, I reckon.

Anyway, that's yer lot for Moorcock, but all being well I'll have another SF-themed post up tomorrow, to celebrate the return of a much-loved British science fiction show to our TV screens: Doctor Who...
Posted by Nick Jones (Louis XIV, the Sun King) at 06:13